One of the many keys to understanding IS the need to acknowledge the concept of ...

seeking less and less ... about more and more

NOT more and more ... about less and less

forever to be able to sustain and physically satisfy all humanity.

Specialization tends to shut off the wide-band tuning searches and

thus to preclude further discovery. It is also mistakenly assumed that

live, for politicians have yet to discover how much wealth is available

for distribution. All this is rationalized on the now scientifically

discredited premise that there can never be enough life support for all.

Thus humanity’s specialization leads only toward warring and such

devastating tools, both, visible and invisible, as ultimately to destroy

all Parthians. It is eminently feasible not only to provide full life support

any individuals interfering with others."

Buckminster Fuller • Manifesto for the Genius of Generalists

and geodesic domes, all of which were designed to be mass-produced using the

simplest and most sustainable means possible.

and as James Dyson has recently stated -

there can be no better UNDERSTANDING than -

for scientists of the future 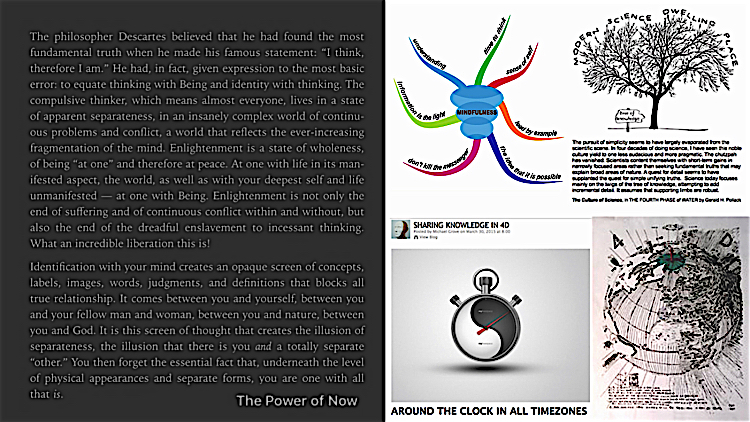 "In the instant of our first breath, we are infused with the single greatest force in the universe - the power to translate the possibilities of our minds into the reality of our world. To fully awaken our power, however, requires a subtle change in the way we think of ourselves in life, a SHIFT in BELIEF" -

As Julian Rose says in his epic - Changing Course for Life; Local Solutions to Global Problems -

To understand one another, involves opening our receptors at the emotional,

spiritual and intuitive levels and then responding from these same levels.

Only then can we start truly understanding and communicating with one another.


views (1,477)
Tagged with: change, less and less, not more and more, set of values, understanding, zaadz

So true & so simply stated (eloquent you might say)! :o)

Love it.
Couldn't have said it better,
nor would I use up the energy trying.

We understand, yet we keep seeking…

Thank YOU for letting us know in silence …

or as Leonardo da Vinci said "the JOY of understanding -

THAT IS the most noblest of pleasures"

I did lots and lots of seeking to get where I am today. which is to say, somwhere and of course nowhere. It was pretty effortful for sure.

part of that saying has to do with the effort and striving, correct? About desperation.

This is not as much an understanding, as it is a destination to where the
NEED to desperately seek becomes a natural flow where not only do we
have a natural process of gaining information and seeing the world, but
it COMES naturally to us. I'm thinking a development of what is called
'vision logic' helps here. the internal reprsentation of the whole
which more or less naturally gives, as does an endless font. And at
this point, we turn to maintainance and comfortable research of the
wonders.

I also think there were times in my life that looked 'selfish'. Sort of how we start out. At that time, this was also
good. Only to turn that one around as well, or to balance it.

Seeking less and less is more a function of being and becoming than
understanding as i see it. The result of hard work. Of an arduous
journey of an adventurer. of a seeker. that hard work eventually
rewarded with 'natural' wonder and 'natural' processes of experiencing.

Part of that saying has to do with the effort and striving, correct? -

About an understanding of the need to desperately seek - a natural flow where not only do we have a natural process of gaining information and seeing the world, but it COMES naturally to us.

science is about the examination of smaller phemonon and the attempt to prove larger theories. Does that some it up? Micro and macro?

But…until it becomes truly inclusive, it will be forever lost. It MUST have a
holistic understanding of things, rather than in the vacuums their
information often comes. Whether it be with smaller phenomenon, or the
inability to use a truly cross disciplinary approach.

I see the problem as not only reductionist, but compartmentalization. And a
large point here is that this is what we as humans tend to emulate.

So…reductionist and rigid or simply uninformed.


As far as the 'seeking less and less about more and more'. To me this is
about the inspiriation. From desperation, no. From wonder and awe,
yes. From a natural awe and wonder, curiosity and fascination.
But…the seeking our of desperation is an issue. I guess the flip side
of that is that we have to also have or aquire an open mind. And I
think I've found that the more I find, the more I realize a) there is
to find and b) the increasing value of those finds. The inherent
meaning and substance of them. All that increases both an open mind
and the wonder, fascination, and the awe to naturally move forward at a
pace which is relaxed and contented, yet eager.

LET US talk more of BALANCE …

“When faced with a radical crisis, when the old way of being in the world, of interacting with each other and with the realm of nature doesn't work any more, when survival is threatened by insurmountable problems, an individual human - or a species - will either die or become extinct or rise above their limitations with an evolutionary leap…

THIS IS the state of humanity now, and THIS IS ITS CHALLENGE“


In the context of the underlying influence of both Dr. Carl Gustav Jung and
Pierre Teilhard de Chardin on the rapid global-wide collective acceptance of
the Transition Initiative; and Eckhart Tolle's statement above …

“ANY intelligent fool can make things bigger, more complex, and more
violent. It takes a touch of genius - and a lot of courage - to move
in the opposite direction.”

..”rise above their limitations with an evolutionary leap…. ” and with a “touch of genius”

OH YES.. that sounds about right!

as Barbara Marx Hubbard has said …

” THE ONLY SOLUTION is our own conscious evolution ”

” This awakening has gained momentum as 3 new understandings have arisen:

Cosmogenesis: This is the recent discovery that the universe has been and is now evolving. As Brian Swimme puts it, “time is experienced as an evolutionary sequence of irreversible transformations,” rather than as ever-renewing cycles.

Our New Crises: We are faced with a complex set of crises, most especially environmental. We are participating in a global system that is far from equilibrium, conditions that are known to favor a macroshift. This kind of dramatic repatterning can be a sudden shift toward devolution and chaos, or it can be an evolution toward a higher more complex order. At this moment in evolution the outcome depends on our choices, and time is running out. We must change, or suffer dire consequences. Our crises are acting as evolutionary drivers pressuring us to innovate and transform.

Our New Capacities: The advent of radical evolutionary technologies such as biotechnology, nano-technology, quantum computing, space exploration, etc., offer us the possibility of profound change in the physical world. At the same time that we are facing the possible destruction of our life support systems, we can also see that the tools are there to transform ourselves, our bodies and our world. We can and are actually moving beyond the creature human condition toward a new species, a universal humanity, capable of co-evolving with nature.


3 understandings that are referred to as the 3 C’s

The resulting interference pattern is effectively a hologram. It is also known that the information carried in a hologram is available at all points where the constitutive wave fields penetrate. It can be transferred from hologram to hologram if they resonate at the same frequency, or at compatible frequencies. We now add that things in space and time are embedded in the electromagnetic field, and the waves they emit are electromagnetic waves. However, according to the new conceptions, objects in space-time are also embedded in the physical vacuum, and the waves they emit in that deeper dimension are not electromagnetic waves, but waves of a different kind, most likely scalar waves (scalars are longitudinal rather than transverse waves that travel at velocities proportional to the transmitting medium—the same as sound waves, the more dense the
medium, the faster they propagate). The interference patterns of scalar waves constitute holograms that superpose and conserve information. This information can be transferred among holograms resonating at
compatible frequency domains.

The above concept offers an explanatory framework for the nonlocal exchange
of information among objects in space-time at all scales of magnitude.”

To make SENSE of your understanding make the right connections

Aside from clarifying his language and understanding of what is meant by a life form, James Lovelock himself ascribes most of the criticism to a lack of understanding of non-linear mathematics by his critics, and a linearizing form of greedy reductionism in which all events have to be immediately ascribed to specific causes before the fact.

He notes also that his theory suggests experiments in many different fields, but few of them in biology which most of his critics are trained in. “I'm a general practitioner in a world where there's nothing but specialists… science in the last two centuries has tended to be ever-dividing” and often rivalrous, especially for funding which Lovelock describes as overly abundant and overly focused on institutions rather than original thought.

He points out that Richard Feynman not only shared this opinion (coining the term cargo cult science) but also accepted a lack of general cause and effect explanation as an inevitable phase in a theory's development, and believed that some self-regulating phenomena may not be explainable at all mathematically.

LESS is MORE for scientists of the future

THE highest form of ignorance is when you

reject something you don't know anything about

economical and thoughtful way; learn to recognise that 'chatter' is a form of waste, just like

over-packaged foods. Indeed chattering aimlessly is a form of vocal pollution. This equally

applies to radio, television and the written word.

The 'media' should be the standard setters for the art of communication, not polluters of it.

The danger is all to apparent, if we corrupt our means of communication, we will

ultimately fail to understand our own roots and cultural heritage, and we will also

ultimately fail to understand ourselves.