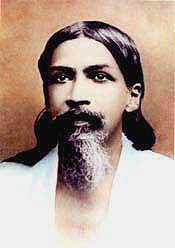 After a short political career in which he became one of the
leaders of the early movement for the freedom of India
from British rule, Sri Aurobindo turned to the development
and practice of a new spiritual path which he called the
"integral yoga," the aim of which was to further the
evolution of life on earth by establishing a high level of
spiritual consciousness which he called the Supermind
that would represent a divine life.


.
.
.
.
.
Sri Aurobindo
wrote prolifically
in English on his
spiritual philosophy
and practice, on social    and political development,
on Indian culture including extensive commentaries and translations of
ancient Indian scriptures, on literature and poetry including the writing of much spiritual poetry.
.
Sri Aurobindo's vision of the future included the appearance of what we may a call a new species,
the supramental being, a divine being which would be as different and superior to present humanity as humanity is to the animal. It would have a consciousness different in kind than the mind of the human, a different status and quality and functioning. Even the physical form of this being would be different, more luminous and flexible and adaptable, entirely conscious and harmonious. Between this supramental being and humanity, there would be transitional beings, who would be human in birth and form, but whose consciousness would approach that of the supramental being. These transitional beings would appear prior to that of the full supramental being, and would constitute an intermediate stage in the earth evolution, through which the soul would pass in its growth towards its divine manifestation as the supramental being in the earth nature.
.
Wikipedia KW - If you take Sri Aurobindo's consciousness stages as a point of comparison—he has about ten or eleven—what he calls “higher mind” would be equivalent to what Spiral Dynamics would call second tier, or yellow and turquoise. But above higher mind there is illumined mind, then intuitive mind, then overmind, then supermind, and then satchitananda, the ever-present oneness. There are at least four or five stages up there that are higher than second tier. So second tier is sometimes referred to as “integral” only because it's more integral than first tier. But these higher stages will be even more integral, all the way to satchitananda, which is like superintegral, including everything.

KW - Exactly. We could use the term “third tier” for whatever stages are higher than second tier—illumined mind, intuitive mind, overmind, and supermind, for example, as actual, permanent developmental stages. But the thing about second tier is that it's a great base camp for all higher development. If you don't have a really good foundation there, when you get to these higher stages, they won't stick very well.
Ken Wilber in dialogue with Andrew Cohen
I would suggest that the consciousness stages are analagous to the various stages of needing to overcome the forces of nature - including gravity - on our travel to the stars as we search for the Holy Grail of consciousness supreme - Sri Aurobindo's vision of the future - and that the transitional beings best begin the journey in a hot air balloon rather than in a Hughes helicopter.

Which does of course raise the issue of an appropriate transcend & include vehicle for continuing the journey. The 'conveyor belt' spoken about by Andrew Cohen & Ken Wiber - could provide the basis for this vehicle but - NOT one conveyor belt for every religion - but the same conveyor belt customised for every perspective of RELIGION, POLITICS & SCIENCE - an appropriate mechanism of implementation in fact.

This mechanism of transportation would transcend & include ALL issues in an ABSOLUTELY integral manner and what better way to describe the collective of transitional beings who would use it - than in Andre Cohen's words ...
.
.
The collective becomes the singular - the collective becomes ONE mind - it's a higher level of evolutionary potential - it's exponential - it's the power of the many literally becoming ONE.
First posted by Michael Grove @zaadz on March 13, 2007 at 13:00
.

There are parallels between Sri Aurobindo's vision and that of

Pierre Teilhard de Chardin as referred to by K.D. Sethna in

To be free from all egoistic motive,
careful of truth in speech and action,
void of self-will and self-assertion,
watchful in all things,
is the condition for being a flawless servant.

The human mind moves always forward, alters its viewpoint and enlarges its thought

substance, and the effect of these changes is to render past systems of thinking obsolete

or, when they are preserved, to extend, to modify and subtly or visibly to alter their value.
Sri Aurobindo

vision will come to pass but know not how far away we are. The description of the impact of being in

has been my experience here at Zaadz over the last year.

The British labeled Sri Aurobindo the most dangerous man in INDIA
as Peter Heehs has written in his The Lives of Sri Aurobindo.

IF only the political development of the sub-continent of India had followed Aurobindo’s understanding of the superior culture of his birth rather than that which followed the colonial grip of the British !!!
???

I have been studying work of Sri Aurobindo since 1980 now. Besides Teilhard de Chardin, Jean Gebser, Habermas et al.

Thid tier discussions of all kind need however this caveat:

Observations on 3rd tier from Philospher-Activist of 21st Century.

IT WAS of course Aurobindo’s ”bodhisattva-like” decision to enter politics thus seeking to appropriately put into the practice of ACTION what he preached, for the benefit of ALL the peoples of India, that singled him out amongst the whole gamut of spiritual teachers, pandits and gurus, which Albert has referred to elsewhere, whose primary purpose was & remains, seemingly, to get by as a result of teaching the word rather than ACTING upon it.

Aurobindo’s rare degree of spiritual independence made him a ”man of his time” in the context of Indian unilateralism, but so also is each and every individual of the human race, whose time is independent of but equally interdependent on, the time of all all other individuals of our species.

A process which both Aurobindo & Jung understood and IS AMPLY described for ALL others to understand within the two-tier system of spiral dynamics IF we are to create a bottom up top down solution design for survival of LIFE on Earth.

Yes.teaching is good. As Don reminds and no research has proved until now is the establishment of third tier stages. Andrew promised a new book this
autumn. Drawing on decades of community with his most advanced students.

There is too much fantasizing right now about these realties.

Tough research and cross-verification is needed:)

Tough research and cross-verification is needed … NOT JUST in the context of what we have been discussing but in ALL areas of concern as sub-sets of the “WHOLE”istic solution design that we seek.

The recent melamine scandal in China comes to mind, and reminds me
of TIMES gone by when Mao Tse-tung “convinced” the Chinese to turn from
rice to wheat production, with ALL its devastating consequences, as a result of LACK of ANY research, tough or otherwise, and cross-verification.

Equally in more recent times the Chinese have been encouraged to
breed cows for milk production and consumption by the people of China,
when it has only just been realised that the vast majority of the children are genetically lactose intolerant.

As Mandela declared to Don Beck AFTER the successful introduction of
spiral dynamic understanding to the “transition process’ from apartheid
in South Africa, and Mandela’s refusal to continue in alignment with
that understanding

just about nails matters on the head !

"You may call it a moral compass, but that is a mental construction or set of rules whether defined and stated, or undefined but understood. What is really missing is not so much something moral but what Sri Aurobindo and The Mother call the psychic or soul.

The psychic is the inner compass that works not by rules or agreed ideas,

but by a vibrational action as a filter on human action.

Sri Aurobindo stated that a complete sincerity demands that the whole being is unified around the psychic centre. The psychic can lead the transformation of the being more surely even than the awakening to the consciousness of the Oneness in All. It lets one know when a decision or an action is not in unity with the psychic by a profound sense of uneasyness. It is perfectly possible to meet beings who have had that Oneness awakening and made all sorts of spiritual realisations (or mental simulacrams of them) but are not unified around their psychic centre and are capable of action that is very egoistic, often by a glorified and magnified spiritual ego.

affecting and then ruling the being."

Modern visionaries, such as the late Indian philosopher and yogi Sri Aurobindo Ghose and the contemporary US-American consciousness researcher Ken Wilber, envision this emergence of a transnational identity  as part of the new step in human consciousness that [IS] now presently unfolding. For the first time in human history, a large number of people feel their growing individual awareness is enabling them the freedom to leave their inherited religions, traditions, customs, as well as their own native lands. This new level of independent thinking and acting is also happening even in parts of the world where the vast majority of people continue to faithfully follow traditional rules and modes of government.