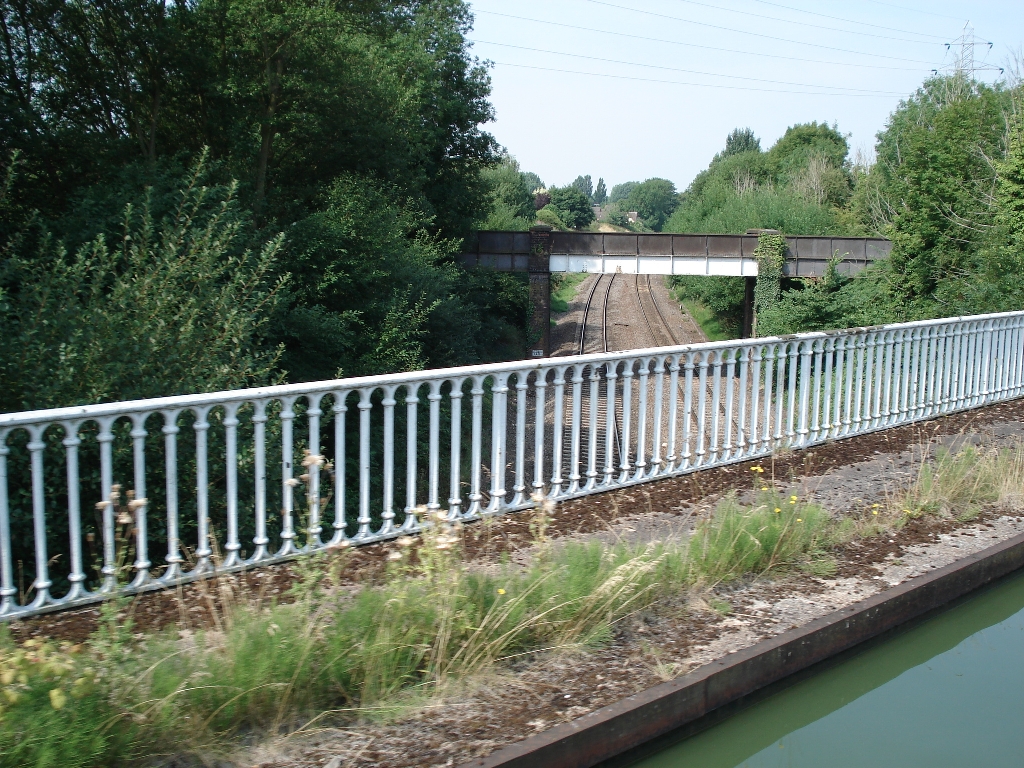 of Michio Kaku - broadly described this month by Elizabeth Finkel in her
article for COSMOS magazine entitled Fish out of water - were obviously
stimulated by an experience which "mirrors" my own fascination with all
things Escher and particularly his Three Worlds lithograph, which he so
beautifully completed in 1955. 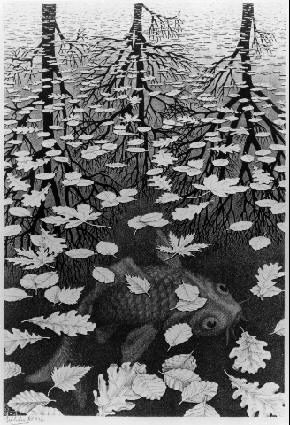 Elizabeth Finkel says -
Understanding other worlds came naturally to him.
Perhaps it was an inevitable consequence of being the child of Japanese Americans. His parents, though born in California, spent World War II behind barbed wire, guarded by people with machine guns: incarcerated by their own country as enemy aliens. Afterwards his father worked as a gardener, his mother a maid: two of the few jobs that were available to Japanese Americans. Kaku grew up poor, but one of the family treats was to visit the Japanese Tea Garden in San Francisco's Golden Gate Park.

It turned out to be the place of a childhood epiphany. Wondering in the way that only a child does, Kaku looked at the carp swimming in a weedy pond and imagined how they would not be able to conceive of other worlds.

"A carp engineer would believe that was all there is; but a carp physicist would see the ripples on the surface and start thinking about unseen dimensions," Kaku told me, laying the first of many lashes on his token engineer. Kaku's curiosity and penchant for unearthly thinking were largely misunderstood, a large part of the reason why today he has become a light unto others. "When I was a teenager and asked questions, eyes would glaze over - I didn't want others to go through the trials of fire."

He stretches his mind to 11 dimensions, understands what Einstein failed to grasp, and he plans for the death of our Sun, five billion years from now. Michio Kaku is a superhero of the incomprehensible.

It was Einstein's unfinished business. The world's best-known and most prolific physicist was driven in his latter years to find a single set of laws for the universe: laws that would apply as readily to the chaotic BeBop of sub-atomic particles as to the majestic waltz of galaxies in deep space.

Einstein failed. But on the 100th anniversary of E=mc2, a new generation of physicists is carrying the torch and offering the answer to Life, the Universe and Everything.

They say the answer is string theory. Problem is, string theory is too weird for most people to understand. Some scientists even say it's more fiction than science.

Not Michio Kaku. One of the world's best-known theoretical physicists, and one of the key players in string theory, he is a professor at the City University of New York. Not only is Kaku 'sold' on string theory - and
one of the earliest players in its development - he is also a passionate proselytiser. He has just completed a world tour for his third popular science book, Parallel Worlds, and is working with the BBC on a documentary series.

But it is not just the desire to spread the word about string theory, physics and the intrinsic value of science that drives him to engage the public. Kaku believes that the very future of the human race is on
the line. "We're at a precipice; we are experiencing the birth pangs of a 'Type 1 Civilisation'. And there's no guarantee we'll make it."

IT turns out it is no easy matter to create a universe where matter, space

and time are stable. For it all to work, the fundamental forces must be

unified. And that unification can only take place in higher dimensions.

As Kaku puts it "Forget building bridges, we're talking about being God.

This is what Einstein dreamt about every day of his life. If I'm God,

how do I create a stable universe? It's extraordinarily difficult."

WHEN HE IS not working, Kaku spends a lot of time popularising science. He is a gifted writer, whose vivid narratives sweep breathtakingly not only across alternate universes, but across art, history, politics, literature, philosophy and religion. His own religious influences were contradictory: his parents were Buddhist, but he was raised as a Presbyterian. Yet modern physics seems to accommodate both views.

"In Christianity, there in an instant of creation; while in Buddhism there is Nirvana, which is timeless," he says. "I am pleased that modern cosmology provides a beautiful melding of these two mutually contradictory ideas: continual genesis taking place in a hyper-dimensional timeless Nirvana."

Kaku described his belief eloquently: "I would say that I lean toward the God of Einstein and Spinoza; that is, a God of harmony, simplicity and elegance, rather than a personal God who interferes in human affairs," Kaku muses. "The universe is gorgeous, and it did not have to be that way. It could have been random, lifeless, ugly; but instead, is full of rich complexity and diversity."

Elizabeth Finkel is a Melbourne science writer, contributing editor to COSMOS magazine, and the author of Stem Cells: Controversy on the Frontiers of Science.

YOUR son was indeed truly enlightened as an INTEGRAL artist.

Thanks for this background on Michio Kaku.

I was myself always fascinated by the phenomenon of time AND space. Finding that time mostly is even less understand than space. Rilke
expressed lots of insights in his letters to Muzot.

In contemorary physics Kaku is unique in his passion to penetrate the reality described in string theory.

In traditional Eastern mysticism, it has been said that the unborn, uncreated, unmanifest empty void out of which the entire material cosmos emerged is infinite. It has no beginning and no end. It is what the Buddha called the Unborn. It is an Absolute dimension of reality that is both birthless and deathless. The material universe, on the other hand, is considered to be finite. Even though it is vast in its expanse, it is ultimately relative, because it has a beginning and an end. It was created. However, cosmologists are now making the extraordinary discovery that the material universe is in fact not finite but infinite. And if what these cosmologists are discovering is true, we need to rethink this traditional mystical assumption. If the evolutionary process and everything contained within it are part of an infinite unfolding as they are finding—if it's not merely inconceivably vast but it's literally infinite—then we don't have to close our eyes or even transcend the mind, time, body, and universe in order to discover that which is infinite. All we have to do is behold the universe that we are already an inherent part of. And that opens the doors for a whole new definition of mysticism.

"Evolution is a light which illuminates all facts, a curve that all lines must follow." -

All who reach this gate, fear to enter.”

To overcome this fear, one must enter it with the suddenness of a knife-thrust.

It is the very gate, of birth, and death, and re-birth.