The IDEA that it is possible ... 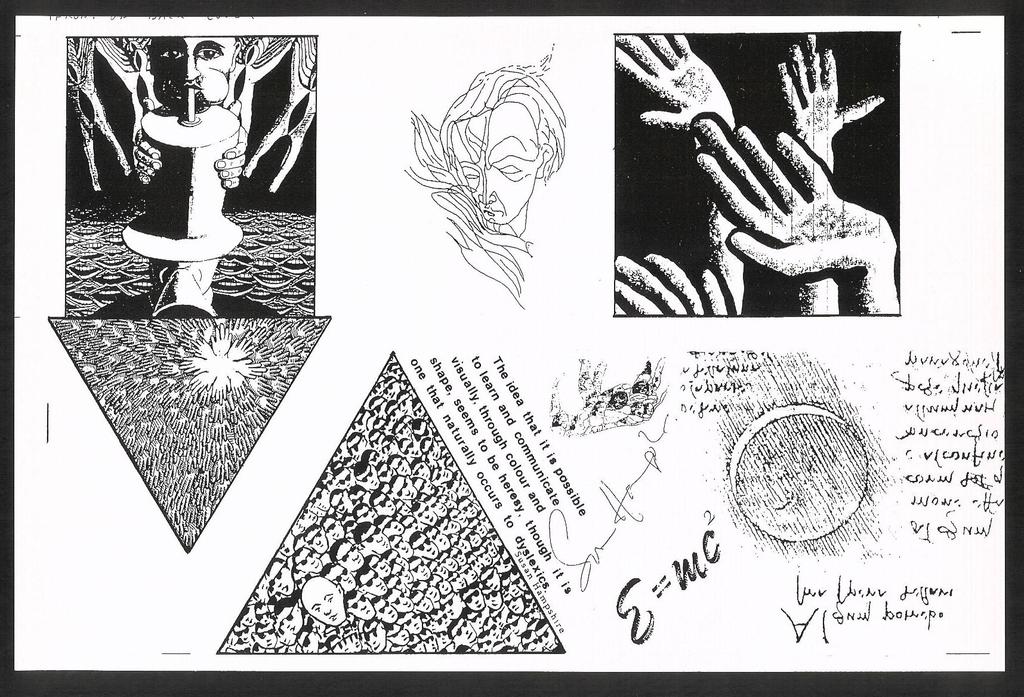 to learn and communicate visually, through colour and shape,

seems to be heresy, though it is one that naturally occurs  to 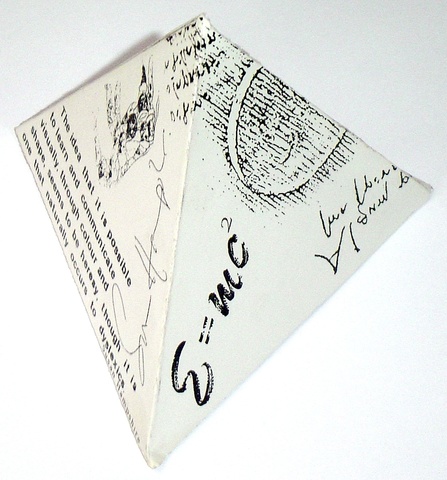 Tim Pryke's artwork IDEA was  produced as print on card for the
"In the Minds Eye" ADT exhibition. The card was manually "cut & pasted" to form a 4 sided prism sitting on a cube.
Tim is the sort of quiet, reserved, accutely sensitive introvert, who might be many people's IDEA of a typical poet.
A delight to meet and talk to, his
heart-felt concern for other people
and their problems is quickly aroused.

Thanks to the Guggenheim Foundation, the folks at the New York Institute of Technolgy and YouTube - Tim's own interpretation of a "sunstone" assumes another perspective - which mirrors his own.
.
"Sunstone is a landmark tape. Symbolic and poetic, it is a pivotal work in the development of an electronic language to articulate three-dimensional space. The opening image is an iconic face, which appears to be electronically 'carved' from stone. A mystical third eye, brilliantly crafted from a digital palette, radiates with vibrant transformations of color and texture.
.
.
Sculpting electronically, Emshwiller then transforms perspectival representation: the archetypal 'sunstone' is revealed to be one facet of an open, revolving cube, each side of which holds a simultaneously visible, moving video image. Created with complex technology over an eight-month period, this emblematic spinning cube metaphorically describes a three-dimensional, temporal space, both hyper-real and simulated. Emshwiller's humanistic approach to technology ushered in the 1980s with a new electronic vocabulary for conceptualizing and visualizing images in space and time. Reflecting an image-saturated world. SUNSTONE marked a new stage in electronic art."
Directed and written by Ed Emshwiller, 1979.
.
.
The creative process is not just iterative; it’s also recursive.
It plays out “in the large” and “in the small”—in defining the
broadest goals and concepts and refining the smallest details.
It branches like a tree, and each choice has ramifications,
which may not be known in advance.
.
Recursion also suggests a procedure that “calls” or includes itself.
Many engineers define the design process as a recursive function:
.
discover > define > design > develop > deploy
.
In order, however, that we should learn and communicate visually, through colour and shape as well as the traditionally accepted modus operandi - as a standard practice for all who would learn - IT has long since been envisaged that some kind of fit for purpose hand-held communications device should be developed to assist the process - and so entered the Tablet Computer.
.
Most ideas come from previous ideas !!!
and have over TIME transmogrified into the reality of FORM follows IDEA
.
First posted by Michael Grove @zaadz on November 15, 2006 at 18:30


views (530)
Tagged with: dyslexic, integral, art, idea that it is possible, in the mind's eye, change, set of values, zaadz

“My work mirrors my thoughts and feelings on the environment I live in. There are times when I need to gain inspiration from the world around me and there are other times when I
need look no further than images in my own mind.”
Tim Pryke

A wellspring of good ideas lies just beneath a limiting assumption.

An Incisive Question will remove it, freeing the mind to think afresh.

The IDEA that it is possible to START ALL OVER - was the basis of the Protestant Revolution - the means by which the equality of CONSCIOUS mutually beneficial capitalist profit was first established by Josiah Wedgwood in Stoke on Trent, England and subsequently hi-jacked by the profiteering & selfishly sophisticated egos of arrogant & greedy Anglican Sugar Plantation owners - who used the Bible to justify slave labour - to evolve the IDEA into the unacceptable face of what absolutely should be conscious capitalism…

Our goal as we unite…

You can view it as a technology race or a joint venture in the common interest. It hardly matters which. If the Chinese can crack thorium, the world will need less oil, coal, and gas than feared. Wind turbines will vanish from our landscape. There will less risk of a global energy crunch, less risk of resource wars, and less risk of a climate tipping point.

Who can object to that?