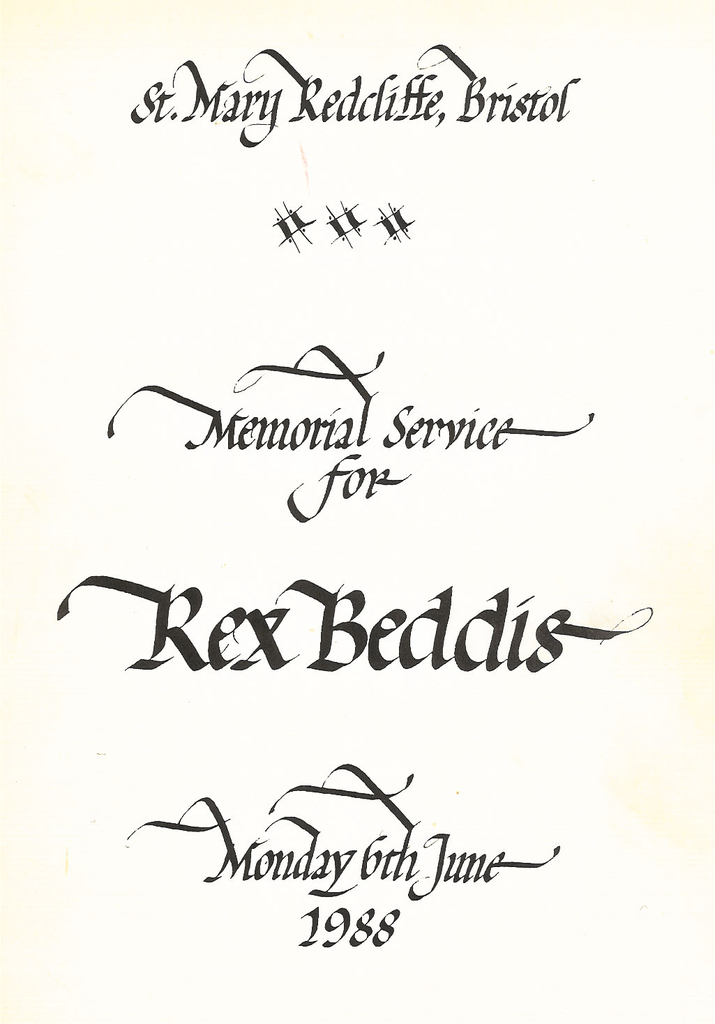 25 years passed already - BUT forever in my memory
Rex Beddis was essentially a humanitarian - his Sense of Place series
for Key Stage 3 Geography students - published by OUP in 1981 & 1982 - placed an emphasis on the understanding of ideas rather than the memorization of facts - and was designed to open the MINDs of those that read his books such that they were awakened to the fact that we are but ONE family ever responsible for the ever changing future of this world - and in so doing the series helped to develop a wide range of skills and ideas amongst its readership.
Rex left a journal composed during the final six months of his life.
In it he wrote the passages which had affected him in a profound sense & they traced his search for spiritual identity. I would dedicate this zBlog posting to Rex's search for his spiritual identity during the final six months of his life.
This service reflects his spiritual journey & uses passages
which he meditated upon, and music which he enjoyed.

In remembrance of all the splendid hours spent together with Rex -
and his vivid understanding of plate tectonics - during our involvement
with the Volcano videodisc project - on behalf of Oxford University Press.

The universally connected hologram of consciousness promises that the instant we create our good wishes and prayers, they are already received at their destination -

And beyond doubt Rex waits for your arrival through the tunnel to return the appreciation of you.

print | permalink | delete
over 3 years later
Michael said
“AS our consciousness shifts from separation and fear to unity and love we join together in co-creative endeavors that embody the values and virtues of trust, respect, equality, cooperation, equanimity, generosity, integrity and compassion.”

” There is arising a new spirituality, experienced as a form of evolutionary consciousness. This consciousness is three-fold: Backward, Inward, and Forward.
It reaches backward in time and identifies itself as the whole process of creation, recognizing that within our atoms, molecules, cells, organs, brain is the whole story of creation. At the same time, this evolutionary consciousness looks inward to Source, to Pure Awareness, to Oneness and holds that as its center. And then it looks forward, yearning to express the creative impulse within, in spirit-motivated action on behalf of the evolution of the self and the world.
Evolutionary spirituality opens up the path of the co-creator. It is not a new religion. It is a new person. Its purpose and practices are to incarnate the Great Creating Process, to discover deeper life purpose, and to express that purpose through joining with others in the cocreation of a new world.”

Like all great scientific ideas, plate tectonics is, in essence, simple. Molten rock welling up

from the deep crust reaches the surface at the mid-ocean ridges. As it cools, it adds new material

to the plates on either side, as they separate at a rate of a few centimetres a year. Meanwhile, at

the deep ocean trenches, crustal rock sinks back into the mantle, completing the conveyor belt

cycle. These plate boundaries – one “constructive” and the other “destructive” – are associated

with volcanism, earthquakes, and mountain-building; the slow movement of the plates causes the

stately march of the great land masses in continental drift. In short, plate tectonics explains at a

stroke all the important geological phenomena on Earth.

The universally connected hologram of consciousness promises that the instant we create our good wishes and prayers, they are already received at their destination -

Millions of people around the world live in the shadow of active volcanoes. Under constant threat of massive volcanic eruptions, their homes and their lives are daily at risk from these sleeping giants. From Japan’s Mount Fuji to the "Sleeping Giant" submerged beneath Naples to the Yellowstone "supervolcano" in the United States, we will travel with scientists from around the world who are at work on these sites, attempting to discover how likely these volcanoes are to erupt, when it might happen, and exactly how deadly they could prove to be.

In 1963, just a year after Watson and Crick received their Nobel Prize for unravelling the

structure of DNA, two other Cambridge scientists were preparing for a second revolution.

A PhD student called Fred Vine and his supervisor, Dr Drummond Matthews, had found the crucial

evidence that the Earth’s surface is not fixed and immutable, but is created more or less

continuously at ridges in the middle of the ocean. The publication of their paper in Nature,

50 years ago this week, under the slightly arcane title “Magnetic Anomalies over Ocean Ridges”,

underpins all of modern geology.

Having recently read Ed Catmull's book CREATIVITY, INC., I can only empathise with his comments about his relationship with Steve Jobs, during the last days of his life suffering from Pancreatic Cancer, in no dissimilar way than I experienced with Rex Beddis.