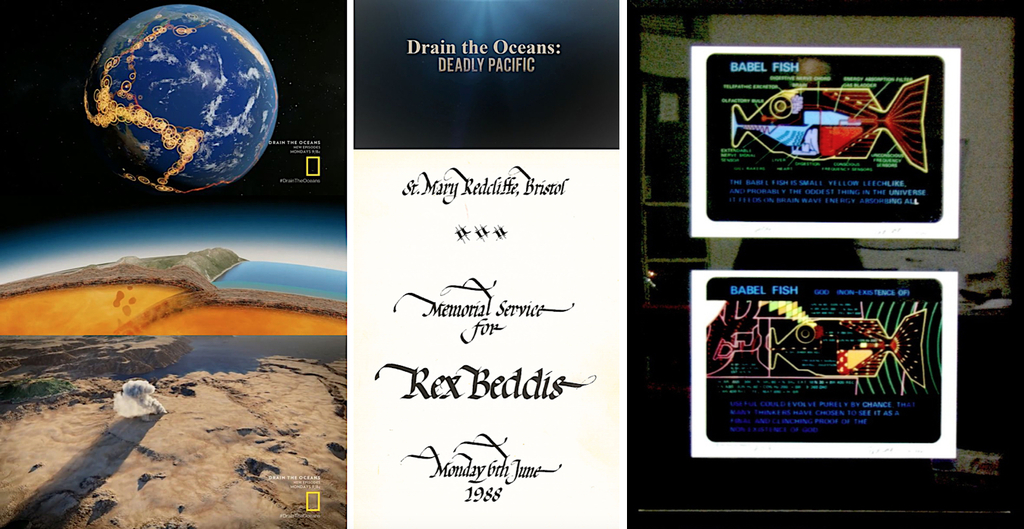 received their Nobel Prize for unravelling the structure of  DNA, two other

Cambridge scientists were preparing for a second revolution. A PhD student

called Fred Vine and his supervisor, Dr Drummond Matthews, had found the

crucial evidence that the Earth’s surface is not fixed and immutable, but is

created more or less continuously at ridges in the middle of the ocean.

The publication of their paper in Nature, 53 years ago, under the slightly

marking the arrival of plate tectonics – the grand unifying theory that

underpins all of modern geology. This subject of plate tectonics had

children's books for the OUP, by the time we began to work together

with Rod Lord of BABAL FISH fame, on the Volcano Videodisc Project

on behalf of Oxford University Press. I well remember Rex arriving for one

of our Saturday morning sessions working on the project at OUP, absolutely

bubbling with the news he had received from NASA that week, about how

The appearance of those rocks may reflect changes that happened after the onset of plate tectonics, though, such as the slow cooling of Earth’s interior.

To some extent, researchers said, the disagreement over timing illustrates how plate tectonics itself has changed over time. Rather than experiencing a sudden switch from off to on, tectonic activity probably evolved gradually toward its modern form.

Nevertheless, significant data gathered over the last decade suggests that a major inflection point in that evolution happened around 3.2 billion years ago, in the middle of the Archean eon. The inflection shows up in several lines of evidence. Sharp fronts and eddies that are ubiquitous in the world ocean, as well as features such as shelf seas and under-ice-shelf cavities, are not captured in climate projections. Such small-scale processes can play a key role in how the large-scale ocean and cryosphere evolve under climate change, posing a challenge to climate models.