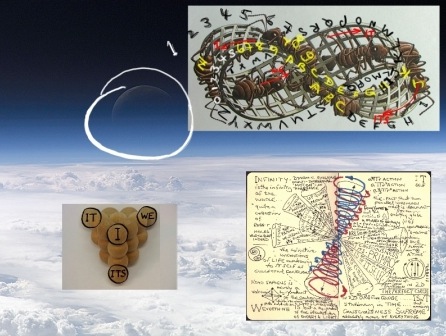 THUS the ever increasing need  for an INDEX of STORIES

"REFLEXTIONS" of our journey 'down THE rabbit hole'

and their interconnections with EVERY other story that has ever been told ...

transcend & include as HOMO SAPIENS was disposed

to say at the beginning of the 21st century -

TIME supposedly waits for no man - as ever IT WAS ...

Yesterday is history
Tomorrow is a mystery &
Today is a GIFT

That's why we call it the PRESENT

- the moment by moment experience  of the here & NOW

doubt whatsoever that - had he been granted the opportunity - the storyline

of "2001: A Space Odyssey" would have become never-ending. In deference

the context of their replacement of the telling of myths, since they were

inscribed on the large bones of dead animals - the AlphaINDEX and

ITS contents are dedicated to ALL the Celluloid Heros.

" I was thinking about what your alphaindex might be all about and that it might in some way, in some form of itself, become interlinked with other people's personal alphaindexes in some way... but I was also thinking of Alex Berry' article and, putting the two together, there's this:

Perhaps dyslexia is not a disorder in any way, shape or fashion.

Perhaps dyslexic people are merely humans who process information the way that they process information. Humanity has progressed beyond the assumption that red haired people are servants of satan, and beyond the assumption that left-handed people are in some way deficient and wrong. Let's throw out the notion of dyslexia, and just say that there are "n to the x power" expressions of human intelligence, that is, myriads of ways that humans process and cognate. Ok, but there's more: So, what did people always get out of categorizing others as "deficient"? They got POWER! "Power Over." (Power in a hierarchical system.)

The balances of power in the world will be shifted tectonically by all of this, no doubt "

As usual when I read your posts, the speed with which I am engaged in your

writing quickly leads me to a place where I say to myself… okay, take one of

Michael's references and explore just that idea and then go to the next one.

Today I have taken…

GOD IS manifest throughout the multiverse of parallel universes as … LOVE

for example where Sophia has kindly "kicked off" - so to speak - & don't forget to do the same throughout my postings here @zaadz.


Please feel free to make your own comments @ any of those individual "rabbit holes" which I will then attempt to incorporate into the WHOLE ...

IN preparation for our journey down THE rabbit hole


The journey began long, long ago & the journey of the ...

hi Michael, looks like your date is way into the future? :)

In the process of continuing my story & putting some structure around my First 100 zBlogs JIGSAW - I have posted The beginning of the end of the BEGINNING in the form of a rudimentary contents page - dated Feb 19th 1902 - and THIS AlphaINDEX of stories - which I have “dedicated” to Linnie & I's 50th wedding anniversary. We will be celebrating our 40th anniversary at the Rats Castle next April 4th and I've given myself an absolute deadline of the occassion of our 50th anniversary to have completed “my task” - here@zaadz.

The AlphaINDEX will now appear at the top of my zBlog ALL the time and the “space” between IT and Merchants of LOVE will gradually be filled with the 1000 piece jigsaw & no doubt a multitude of hyperlink interconnections - in the form of the final story to be told - of how ALL 6.5 billion on earth came to partake in the journey

Sandra Jenson @*zaadz has said that - ” it would be so great to see your 'mechanism' vision fleshed out in a linear way - although I can imagine you don't really want to do that in case it falls into the wrong hands ” - but quite frankly I AM a great subscriber to the MINDset of Tim Berner's Lee & a very good lady friend of mine called Louise Detremont - in that getting such a BIG idea into the public domain in the first instance cannot happen as a result of self-interest. I have fortunately been able to keep ME & MINE financially afloat for many years despite the fact that I have had to give so many of the component ideas of the whole away already - albeit in the meantime making a very good living, so to speak , whilst awaiting the next stage of the process. Tim of course gave us the internet - care of a NEXT server and an Apple MAC Hypercard front-end - and Louise and her very small team invented, patented and produced the world's first colour photocopier which they gave to Canon to make sure that it was established as the standard.

As such I equally have had my own perspective on being as transparent as possible & to share all with all - but always trusting my gut instincts in respect to my understanding of the integrity of those that I interact with. Chris Curry, Director of Acorn Computers, was always telling me that - I was to free with my information - to which I invariably replied - I have more than enough to give away and strangely the more that I give away the more seems to return !

I have always 'seen' the beauty of the duly constrained web log template as a unique way to potentially combine the linear processes of history, mystery and the here and NOW. The the next step was of course the NEXT step for Tim - which IS NOW history but please continue to trust that you ARE ALL simply making it anyway - on our Merchants of LOVE journey of ONE

I love this post. It is so futuristic and creative and courageous, yes, courageous. On this date, I am healthier, wealthier, and wiser much more when I have posted this on April 24, 2007 CE.

Thank you for this opportunity.

Beautiful and inspiring….I will be referring to this post often…Thank you Michael!

MY THANKS IN GRATITUDE TO SUSMITA

Yesterday is but a Dream,
And To-morrow is only a Vision;
But To-day well lived makes
Every Yesterday a Dream of Happiness,
And every Tomorrow a Vision of Hope.
Look well therefore to this Day!
Such is the Salutation of the Dawn!

So Glad I just Happened Upon this Blog entry .. Thank you its Brilliant!

VERY~ I could spend days just on this blog~ and probably will, until I'm pulled scratching and screaming away from the computer!

would you mind so terribly much if I asked you post a few good stock tips for 2018. Just leave them here and I will check back every so often.

I'm sure you are beginning to understand that I'm trying to utilise the 'mobius construct' within the zBlog “linear” template to tell the timeless story of TIME - in the context that ALL we are ever DOING is becoming aware of what already IS and continues ever to BE.

A global fully interconnected AlphaINDEX of AlphaINDEXs - instinctive & intuitive 'wikiwise' - IS the only method by which an IP/MPLS “dictionary” can   be constructed - that adheres to the concept of less & less about more & more.

Remember behind the SIMPLE lies the COMPLEX.

Once we are truly able to construct THE simulation of the REAL WORLD reality such that we cannot possibly PHYSICALLY PERCIEVE the difference
between the simulation & the reality ALL will TRULY become clear.
We have to be sure though that ALL 6.5 billion are aware of the WISDOM of THIS KNOWLEDGE before the power-elites take control yet again.

My son Jamie ( intuitively instinctive & logically rational ) - who
KNOWS me more than anyone, since the Christmas eve before his 12th
birthday - telephoned me from the cinema whilst he was watching the
first showing in Europe of the MATRIX film - to tell me that my ideas had been put into a film but they hadn't quite “got IT right”.

My prototype construction of an “art of the possible exemplar demonstrator” here @zaadz is no doubt proceeding as IT should.

BE careful. Strive to BE happy. What IS IS and ain't no ISer.

BUT ONLY after the business of breaking down the BABEL barriers of ALL the individual rabbit holes had been completed !

Good Day to you, Michael!

I've been fussing, and I do mean churning the wheels for how-to do what I   need to do with my posts and such… as you may have noticed, there's
been a slow postings of growth to my site. This is largely a technical
hump for me.

I've been diligently learning what I need to put information out in a form that works for me to get informing accomplished in a way that fulfills my intentions. One of my techno-hangups has been how to index information and set that up prior to creating a lg heap of info that I'd need to later back-track and
plug into an indexing system.

I wake up each day with answers falling into place as I flow into my daily doings. Today, your Alpha-Index lands on my plate. The connection is not surprising,
REALLY, need attunes to answer.

The trust of vigiling when I set a call, to All That IS, which compels the answer, has met with the at+one+ment of perfected timing. Noticing the Bigger Picture
of how the Unity of Oneness is nourishing unto ItsSELF is always a
delightful moment of recognition. Joy, oh, Joy beats my lovely heart!

I LOVE your Alpha Index! It is the Balm of Gilead for my organizing of
web info. This closes of gap of how-to get this done and to get on
with the business of sharing onward.

May I implement this functional idea of your initiating upon my humble site thereby giving wings to my Great Work without insulting you in any way? I suspect that you may look at this as an absurd question for your very nature
and understandings flow from Oneness, yet, I consider graciousness an
action my heart enjoys, thus, I ask.

I respect your creativity and my asking is to honor the beginnings of such a wonderful tool.

All to Love, Sharon

KPAX meets Assisi on the road to Shamb(h)ala.

You continue to delight and inspire us,

I AM most gratified to be honoured by one who has had the good fortune to open a show for SHE - who writes songs with a jagged-edge knife that cuts clean lines.

Michael, you are truly amazing. You are loved.

THIS REPORT is the latest research report in a sustained effort throughout 2014 by the Pew Research Center Internet Project to mark the 25th anniversary of the creation of the World Wide Web  by Sir Tim Berners-Lee (The Web at 25).