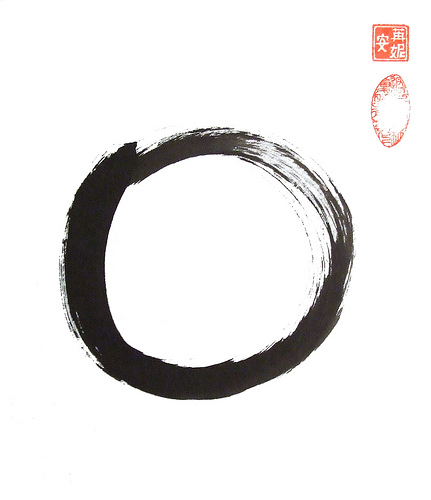 Z zero 1
円相 “Enso is the circle of infinity, symbol of simplicity with profundity, emptiness with fullness, the visible and invisible. It sometimes forms a moon, sometimes a rice cake.” ~John Stevens, Sacred Calligraphy of the East, p. 190 - LOVE SUPREMELY - indeed -
The enso (“circle”) is the emblem of ZEN. A simple circle drawn with a single, broad brushstroke, it is a symbol of infinity, and represents the infinite void, the ‘no-thing,’ the perfect meditative state, and Satori (enlightenment)
ZERO - NO THING - TAO

TAO - the meaning in English, then, is that of "a track which, though fixed itself, leads from a beginning directly to the goal. The fundamental idea is that the Tao, though itself motionless, is the means of all movement and gives it law." from The Secret of the Golden Flower by Richard Wilhelm published with a commentary by psychologist Carl Jung.
Where Science and Buddhism Meet PART 1
TAO begot ONE

and THE END POINT

by way of a thankyou to galtenberg

OUT of the DARK came LIGHT that was split
into 16.9 million colours for the WHOLE to
feast their EYES on

Thank you Michael. The symbol is indeed an African symbol for Immortal; awareness radiating from the eternal source of non-duality.