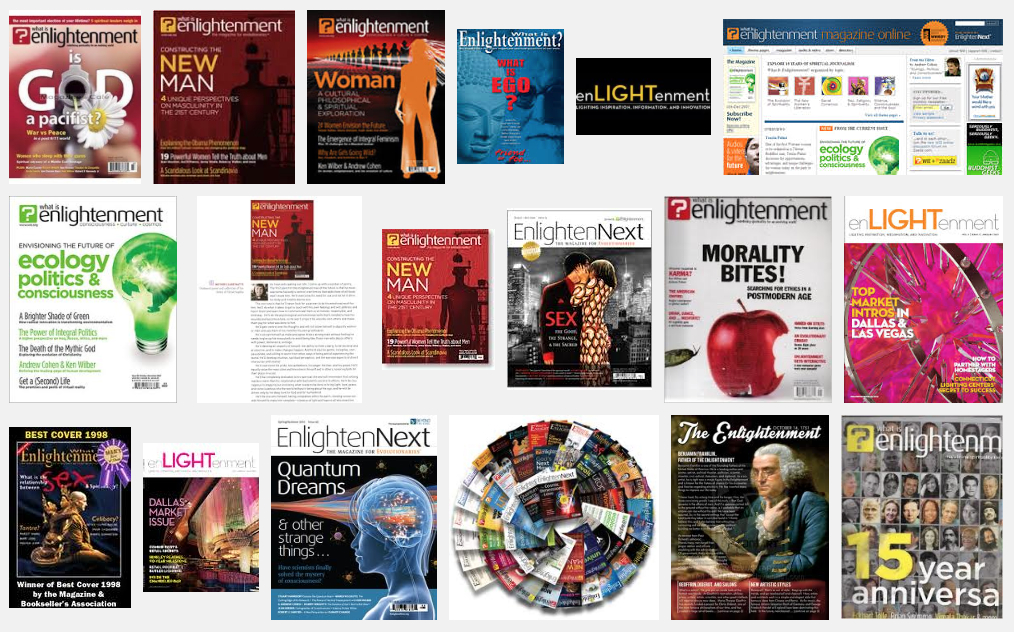 What Is Enlightenment? or WIE for short, was an international magazine

devoted to philosophy, culture, and the growing integral movement,

which had first appeared in 1992. The magazine featured articles by, and

been a subscriber to the WIE Magazine for some time having previously purchased several copies from airports and our local Borders outlet ...

been sympathetic to the evolving format of the publication ...

and welcoming of its broadly diverse perspectives ...

and had also listened for many hours to Andrew Cohen's ...
"The New Enlightenment",

and had purchased and watched Andrew and Don Beck's inspiring

documentary, entitled ... Leap into the Future, which posed the question

... Can we human beings make the radical shift necessary to save our

planet and ourselves? ... during a day spent with some of Copenhagen's

confirmation that my own long standing commitment to selfless and

compassionate support for pushing the edge, in the face of apparent

and provided renewed motivational energy  to my ONE and only SELF.

of TRUTH - is one that we are ALL destined to make.  NOT with a

friend, a partner or a lover - or in accordance with some religious,

"The true 'Way' cannot be used to look into the heart of another, and can only be appreciated and found on one's own. What others say is but 'oral Zen' - ZEN not practiced but simply preached or talked about

As I have said in conversation with Albert, elsewhere, in the context of

Andrew Cohen's 'Visionary' piece ... 'You may recollect that my posting at

zaadz, towards the end of 2006, entitled 'Don't kill the messenger'

referred specifically to Andrew Cohen. BUT these particular words of

Andrews remain none the less important, as a stimulus to a thoughtful

ba'bel about Cowan. I saw in Beck a tired and weary soul, seeking

against all the odds, to establish 'the seed of Graves' at the core of

I suppose, it was Susan Bridle's interview with Brian Swimme, when she

first asked him ... "What do you feel is the most pressing crisis facing

humanity today? What are the planetary issues we most need to wake

up to and address? ... which most influenced the subsequent writing of

In 2008, What Is Enlightenment?  was renamed  EnlightenNext magazine.

It ceased publication in 2011. I can only imagine that the reason that

USA, for the taking of action, which over here in Europe is funded through

taxation on a collective basis, a system which many in the USA perceive as

socialism and some even communism.  BUT then again, a whole lot of those

same people believe that the world is only 6000 years old and what, anyway,

has the European Union of 28 states, an EU that stands for unaccountable

monopoly government - by the elites, for the elites - REALLY got to shout

about - in accordance with the extant model of globalisation and global

Then during the summer of 2013, much 'titel tatel' over the years about the

real motivations of Andrew Cohen, resulted in him going on sabbatical and

the international network of people who have studied, collaborated,

and trained with me for so long. They are all examples of Evolutionary

Enlightenment in their own right, and I couldn’t imagine a greater

community of people to carry forward this movement. I’m looking

forward to working with them in a very different way in the future."

Having been first introduced to the mindset of, and the particularly significant for me, psychological perspective of Carl Jung at Grammar School • my own understanding of how difficult it was to KNOW THYSELF as a left-handed dyslexic • who during my training as an Air Traffic Controller, realised my capability of being able to manipulate multi-dimensional space/time events, within my head • came naturally to me.  This obviously had had a lot to do of course, with the parental and grand-parental encouragement, which I had received during my childhood, as a result of their own understanding that I was somehow different from anyone else but nevertheless responsible for treating everyone else with respect and responsibility, because everyone was just as important as everyone else. I started to really think about ALL of THIS, I suppose, when the universe decided that I would be the one controlling the EL AL flight when it was hi-jacked by Leila Khaled and her colleague, whilst I was working at London Area Radar Control on the north side of Heathrow Airport. Having lived with my maternal grandfather • who had survived Scapa Flow during the Great War • and a father who had survived the duration of WWII, relatively unscathed, following his travails in North Africa, until I left home to begin my Air Traffic Cadet Training at the Ministry of Aviation College at Hurn Airport; and having subsequently, read extensively about the consequences of ALL Conflicts in Space, Time and Culture, it was no surprise to have read about Clare Graves epiphany, so to speak, consequential to his own WWII experience of conflicts in space time and culture.