The search for the Holy GRAIL ... 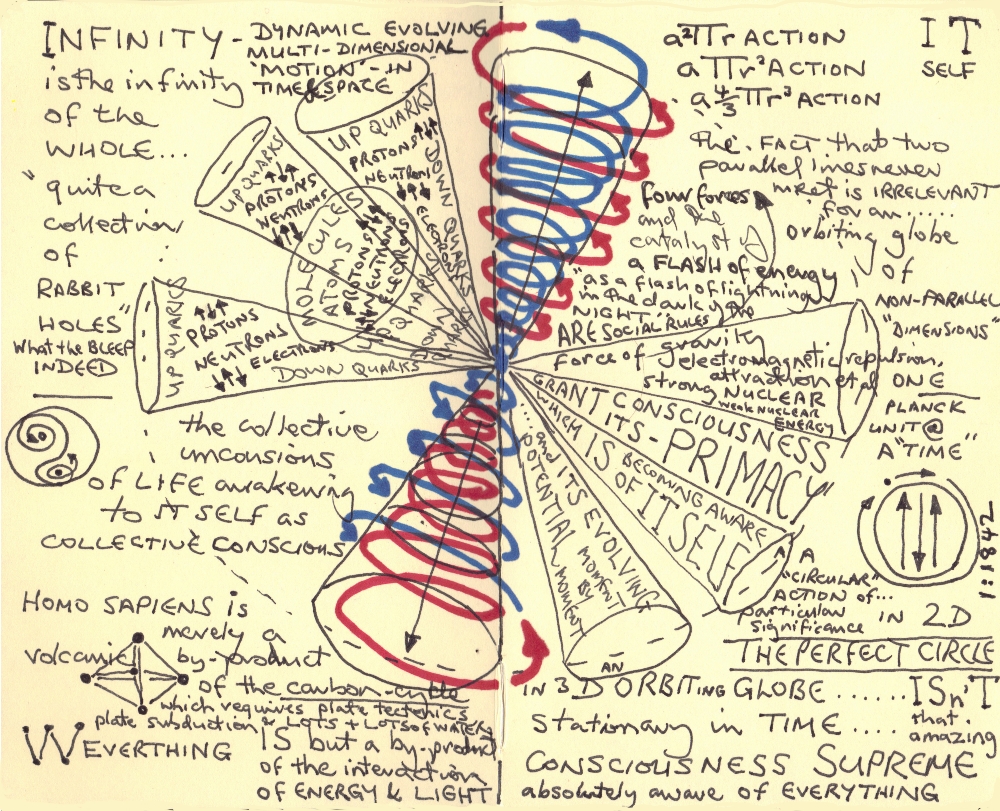 of TRUTH - is one that we are ALL destined to make.

NOT with a friend, a partner or a lover - or in accordance with some religious,

The true "Way" cannot be used to look into the heart of another, and can only be appreciated and found on one's own. What others say is but "oral Zen" -- Zen not practiced but simply preached or talked about - Henry Chang

EACH and EVERYONE of US on this PLANET

has to become their OWN LEADER

As Michael Smith has said…. No TEACHER No PATH Just THIS.


Hubble Deep Field: The Most Imp. Image Ever Taken (Redux)

It is our relationship with the ONE - manifested through the reality of Yin & Yang - that must be sought - to provide the truth of HOMO SAPIENS involvement in the evolution of Kosmic CONSCIOUSNESS.

The awakening - in fact - of Carl Gustav Jung’s
collective unconscious, to itself, as the evolving collective conscious – in synchronicity with Einstein’s statement that - a new type of thinking is essential if mankind is to survive the move to higher levels.

The living have to “pass the torch” to the living - to perpetuate the continuous evolution of DNA and IT’s collective intelligence as well as the future well being of the Kosmos.

The underlying secret of this process is NOT just the
Law of ATTrACTION –
because, as one of the Universal Laws, it is also but one of the four interactions which combine as nature's glue - the fundamental forces of nature - to HOLD the universe & probably the multiverse together – but the ABSOLUTE need to recognise an understanding of
every possible perspective of the BIG PICTURE – from without – as a point of singularity of perspective of the BIG PICTURE –
FROM WITHIN !!!

Our experience of that primary consciousness is masked by mass and matter.

Life's highest aim is to reunite with that primary consciousness.

Simply put - CONSCIOUSNESS is FIRST of ALL

In order that we @zaadz should FOCUS, FOCUS, FOCUS
on the BIG PICTURE - let us consider THIS

as a basis for further discussion.

PARIS, Feb. 2 — In a grim and powerful assessment of the future of the planet, the leading international network of climate scientists has concluded for the first time that global warming is “unequivocal” and that human activity is the main driver, “very likely” causing most of the rise in temperatures since 1950. They said the world was in for centuries of climbing temperatures, rising seas and shifting weather patterns — unavoidable results of the buildup of heat-trapping gases in the atmosphere. But their report, released here on Friday by the Intergovernmental Panel on Climate Change, said warming and its harmful consequences could be substantially blunted by prompt action. 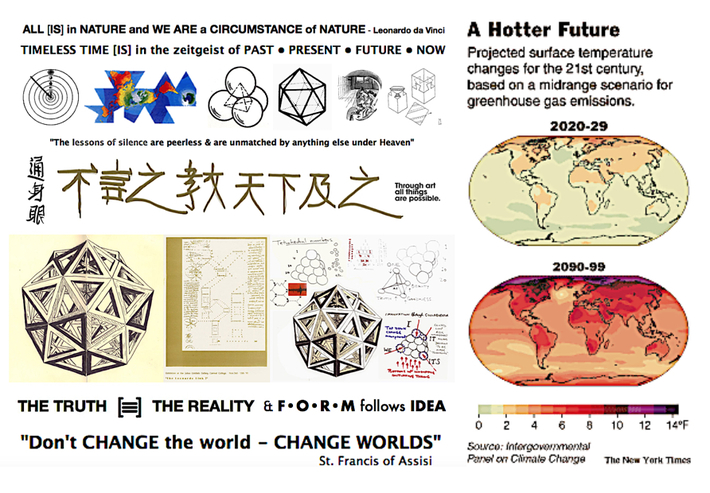 While the report provided scant new evidence of a climate apocalypse now, and while it expressly avoided recommending courses of action, officials from the United Nations agencies that created the panel in 1988 said it spoke of the urgent need to limit looming and momentous risks.

By interaction we make life real by the thoughts we project.

The word synchronicity is of course one of Carl Jung's most useful legacies - which goes far beyond the strict meaning of coincidence to include our subjective human experience of chance events - and refers to coincidences that are meaningful to the percipient - in which something other than probability of chance is involved.

The ultimate evidence of synchronicity must surely be the fundamental physical laws pertaining to the moment by moment evolutionary process of the universe or indeed the multiverse - what the physicists call our fundamental constants - the masses of atomic particles - the speed of light - the electric charges of electrons - the strength of gravitational force & the fact that energy and matter are two expressions of the same thing.

All of which Albert Einstein said -

“represented a somewhat unfamiliar concept for the average mind.”

IN the context of the BIG PICTURE we should consider a construct beyond ALL dimensions - understanding where energy and light condense into matter and then shift back into energy and light and so forth on a “regular” cyclic basis - in no unsimilar way than a nuclear fussion engine would have to function - and that this time around the focus of all attention is on the EARTH - and the evolution of intelligence - to establish a better template for the next time around stage of THE EVENT.

Let us not forget that Einstein had been dead for some years - apart from his god particle - before plate tectonics had been proved and that only just now is science awakening to the fact that the LIVING ORGANISM capability of any planet in OUR universe is TOTALLY dependent on lots and lots of water to lubricate the sub-duction process - to enable the establishment of a carbon cycle. HOW BEAUTIFUL IS THAT - and as Hawkins once lectured - should we not consider that HOMO SAPIENS is perhaps the ONLY intelligence in this universe with an ABSOLUTE responsibility for its qualitative evolution.

The cycles of LIFE - day by day - month by month - season by season - year by year - and every 26,000 or so years recurring - introduce forces which still today trick our minds as a result of the psychology of visual perception - and as has been said elswhere we have only recently proved to the sciences' content - the influence of one photon on another - over the greatest of distances - as a result of our present understanding of the mechanics & dynamics of quantum physics.

In the case of THE EVENT there is no reason why the one true constant shouldn't be light and that it is     our perception of TIME & SPACE as we approach the next shift back - totally limited at present by our existing capabilites to resolve the 256 shades of grey, 16.9 M colours & 1080i moving pictures of sight
and our similar capacities of sound, smell, taste & touch - albeit about to be enhanced by machines as Kurzweil predicts - that is allowing us to cope with an ever accelerating rate of change at this point of the process. Somewhat analogous I would suspect to the experience of riding on a train traversing the surface of the pendulum as it swings from side to side.

Our success in this evolutionary venture presupposes that the faculties of each & every individual and the interconnected collective of individuals as a whole - should be used to maximum capacity - from the 1st person singular, present tense, here and now perspective - utilising all our instinct, intuition and inspiration - to create an energy field *** so to speak which will enable US all to ride the shift back.

*** raising our energy / vibrations - in new-age–speak - but really a BIG PICTURE superset thereof.

Consider this if you will & get back to me with your initial comments - assuming that your don't already perceive me as the my-head madman - hopefully with the view to me describing to you - the model of the system by which this is all happening and the vehicle which I have long since imagined - which will allow us to traverse the model.

the sun is rising

Sarva has said that - the sun is rising - as indeed IT IS - & Mushin has said elswhere that - THIS IS the challenge: seeing that there are no pre-given and objective constellations in the skies anywhere, and wholeheartedly facing and embracing this freedom; moving from a bi-directional, vertical understanding of the Highest and Lowest towards an omnidirectional, participatory, co-created, radically pluralistic reality. Dawning on us is a cosmos with innumerable SUNs; stars around which constellations of experience, understanding, faith and meaning are configured and brought forth in the dynamic holographic matrix   of the mystery we call reality

I would say - study, in depth, the 2D representation of the 3D omnidirectional, participatory, co-created, radically pluralistic reality - of the KOSMIC multiverse, centred on the everlasting point of singularity - which has been used to illustrate this zBlog post and make comments accordingly !

What I just don't understand is how any part of the universe, even ourselves, could be ASLEEP! The miracle of existence is just too HUGE! How can the collective unconsciousness need to awaken to ITSELF? But I know it's true, because I know that I've been asleep. Not just at night, but for most of my life, because I identified with all my thoughts, desires, emotions, etc. Oh, awakening!!! How could there be no words with which to express awakening?

“ I seek the truth…
IT IS only persistence in self-delusion and ignorance that does harm.”

~ Marcus Aurelius, The Emperor-Philosopher from Meditations

” The transcendental path IS NOT masculine or feminine ”

Balance & harmony have to be restored on this planet in order to provide the solution to this dilemma. But balance and harmony can only be restored by the whole species looking within for the     “inner fool”, and therein lies the further dilemma that the female of our species has to first acknowledge and transcend the dark side of the feminine before the foolish feminine element can be established …
which will truly address that negative aspect of the masculine,
which is the source of the imbalance and disharmony ,
which “consciousness supreme” seeks to correct.

The simple life should be the quest for all beings, for it is the representation of Minimalism; Gods true sign of perfection - it can be seen everywhere - seeds are examples of what no man can ever do, make
orange juice out of dirt with the help of a small seed.

Also an explanation on how mankind needs to sleep, and how simplicity can achieve it …

” It might be useful to consider that the internal search for spiritual power and awareness might not be like the external search after objects and renown. The goal might not be inward domination. In order to transform all the negative forces of personality, it might be necessary to cleanse the portals of perception. If the things-that-are are perceived for some of their inherent glories, desire and emotion might follow along. Then you might know happiness, and samadhi might come chasing you! ”