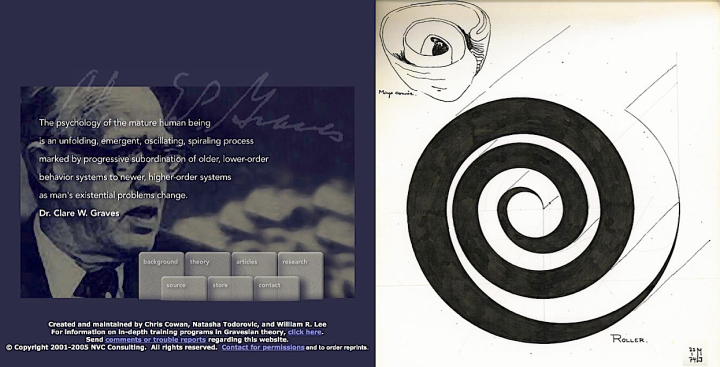 Damn it all, a person has the right to be who he is

As often seems to happen, wartime energy and post-war euphoria serve as breeding grounds for visionary thinking and bold, new break-throughs in human knowledge. Such was the case with Clare Graves. Rather than re-hash older psychological constructs or participate in the debates between the conflicting theories of the day, he decided to start afresh by searching for the reasons behind shifting views of human nature.
.
.
.
Clare Graves was one of the first psychologists who understood that we live, act, make decisions, and undergo change through complex systems. His informal drawings and illustrations would be familiar to any serious student of quantum physics, general systems and chaos theory.
His ideas can best be crystalised by this following statement -
“Briefly, what I am proposing is that the psychology of the mature human being is an unfolding, emergent, oscillating, spiraling process, marked by progressive subordination of older, lower-order behavior systems to newer, higher-order systems as man’s existential problems change.”

Jacques Fresco talks here about behaviouralism as the everyday manifestation of the process of  Spiral Dynamics.  Some would say that Fresco is not explicit enough in differentiating between behaviouralism or something like Spiral Dynamics - but what he IS referring to - particularly in the context of the Zeitgeist Movement and Integral Zeitgeist - IS exactly what Clare Graves was trying to communicate in his statement that -
"The psychology of the mature human being is an unfolding, emergent, oscillating, spiralling process marked by progressive subordination of older, lower-order behaviour systems to newer, higher-order systems as man’s existential problems change."
.
.
.
Ralph Waldo Emerson described life on a spiral staircase - we wake and find ourselves on a stair; there are stairs below us which we seem to have ascended, there are stairs above us which go out of sight - LIFE's spiral is expansive, open-ended, continuous & dynamic. All the whorls are alive at once. Yet there is also an inner intelligence that draws them together in a hierarchical structure - the curvatures of life.
Clare Grave's orientation was to integrate BIO - PSYCHO - SOCIO
- thus meshing human knowledge and breaching the walls of academia
that separated disciplines and fields - and as Clare Graves predicted ...
THE WORLD is in the transition to second-tier human existence.

MOVING beyond the Monetary System

“When man is finally able to see himself and the world around him
with clear cognition, he finds a picture far more pleasant. Visible
in unmistakable clarity and devastating detail is man’s failure to
be what he might be and his misuse of his world. This revelation
causes him to leap out in search of a way of life and system of values which will enable him to be more than he has been. He seeks a foundation of self-respect, which will have value system rooted in knowledge and cosmic reality where he expresses himself so that all others, all beings can continue to exist. His values now are of a different order from those at previous levels: They arise not from selfish interest but from the recognition of the magnificence of existence and the desire that it shall continue to be.”

SPECIAL THANKS to The National Values Centre for the QuickTime audio clip of Clare Graves
.

THE PRESENT MOMENT finds our society attempting to negotiate the most difficult, but at the same time most exciting, transition the human race has faced to date.

The future presents us with three distinct possibilities.

1. A massive regression back to our stone-age beginnings if we fail to stabilize our world's weapons and endangered resources.

2. A version of George Orwell's 1984, embodied in forms of BLUE-ORANGE-GREEN tyrannical, manipulative government with glossed over communitarian overtones.

3. The emergence of a Second Tier approach to business and society which would be fundamentally different from the one we know today, equipped to act locally and plan globally while acting globally and planning locally at the same time.

Clare Graves - Levels of Existence, Forms of Being

thank you very much for this honoring of Clare Graves. The man who did his work at roundabout same time as Abraham Maslow and yet dived far more into systems complexity.

Graved work is completely under estimated in integral circles AND academia.

I spoke with Dorothea Zimmer, SDi Core groups for German speaking countries - and she confirmed that the first academic groups here are asking for information about Graves.

Once again, thanks you vey much for presenting Glare Graves!

Damn it all, a person has the right to be who he is - Dr. Clare W. Graves

Kids have the right too….now help me get that color guard started Michael.? Poppy would be a great advisor to the 4 year olds? :)

WELL for starters the BLUE-ORANGE-GREEN has to progress towards

BLUE-GREEN by way of Beck and Cowen's viewpoint that …

1. PURPLE and RED must establish effective BLUE authority before ORANGE can sprout.

2. BLUE stability and ORANGE entrepreneur”ISM” must be present before GREEN social transformation is feasible.

3. Overarching YELLOW macro-management of the whole process IS essential.

I would then propose that …

“Briefly what I am proposing is that the psychology of the mature human being is an unfolding, emergent, oscillating spiraling process marked by progressive subordination of older, lower order behavioural systems to newer, higherorder systems as an individual’s existential problems change.

Each successive stage, wave, or level of existence is a state through which people pass on their way to other states of being. When the human is centralized in one state of existence, he or she has a psychology which is particular to that state.

His or her feelings, motivations, ethics and values, biochemistry, degree of neurological activation, learning system, belief system, conception of mental health, ideas to what mental illness is and how it should be treated, conceptions of and preferences for management, education, economics, political theory and practice are all appropriate to that stage.”

Previous COMMENTS made on the original *zBlog of Dr. Clare W. Graves On the Threshold of the Return

While Dr. Beck was searching for someone like Elza Maalouf to help him bring Spiral Dynamics to the Middle East, after the events of 9/11 many in the consciousness and human development communities turned to him for answers. They wanted him to duplicate what he had done in South Africa in this troubled part of the world. The Middle East steered the passions of several conscientious leaders, including Ken Wilber and many in the Integral & Spiral Dynamics communities. After the events of 9/11 and the ensuing wars in Iraq and Afghanistan, the search for more conscious and sustainable solutions went into high gear. And, while Dr. Beck was known the world over for his involvement in South Africa’s transition from apartheid, the details of his ten-year involvement had remained obscure to those outside his circle of influence. In 1991, with South African journalist Graham Linscott he wrote what amounted to an academic book about the experience. The book was titled The Crucible, Forging South Africa’s Future, which he dedicated to his friend and mentor, Clare W. Graves. Its content and the experience were the predecessors to the book Spiral Dynamics, which brought forth the value systems framework to the world. By the early 2000s, Dr. Beck was witnessing the global success of the Spiral Dynamics framework and, based on its teachings, he was becoming a renowned geopolitical advisor. But, as he told Elza during their first meeting, he was itching to apply it in the field where it made a difference in people’s lives as it had in South Africa. 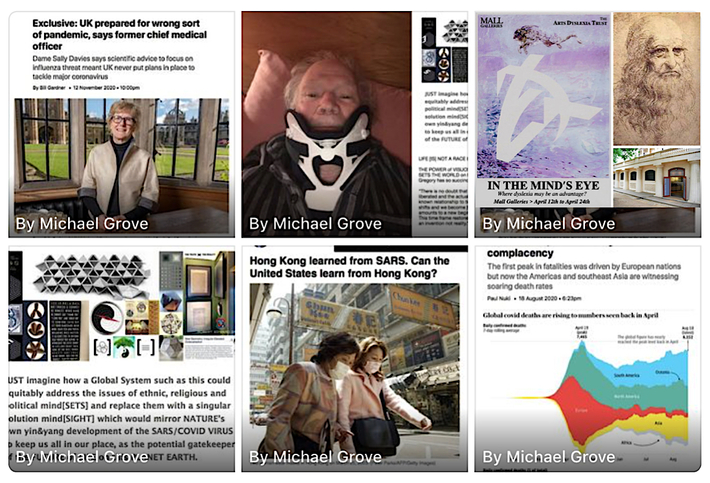 ANY concept of FOR•BY•OF the BRITISH PEOPLE has long since
disappeared Steve and the single fact that THE TORY GOVERNMENT
spent £106 million plus analysing the potential need to prepare for
THE GLOBAL PANDEMIC that we have all been subject to recently,
chose NOT to make those necessary preparations because their
investigations concluded that "SARS will NEVER TRAVEL THIS FAR",
just beggars belief without question !!!???
.
https://www.facebook.com/search/top?q=michael+grove+sars