I HAVE BEEN BEMUSED OF LATE ... 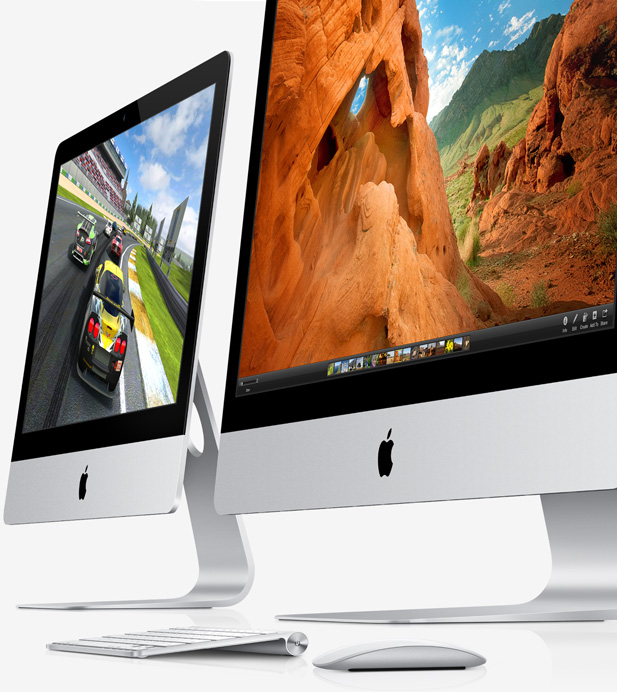 BY THE CONTINUOUS DIATRIBE emanating from

the parallel worlds of the global financial markets -

concerning the Apple share price and whether or not

Apple will be able to continue to manifest its model

Whatever the markets decide, Apple has led the way - by way of the innovative process of producing products that the people "needed" rather than what "big brother" was willing to provide them with - and ever since the Apple II established itself as an electronic spreadsheet platform - Apple have launched the what you see is what you get (WYSIWIG) Macintosh, first in 4096x4096 black and white and then colour - the iMac in several evolving guises - and thence iPod, iPhone and more recently the iPad. 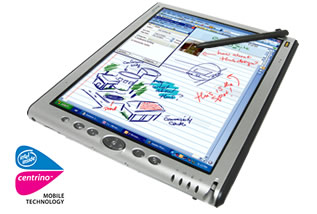 Every one of these products established the

human interface mould for the available

technology of the time - which the rest of

the industry has either adopted, eventually

caught up with or launched their own

versions such as Microsoft's excellent

Microsoft developers who were told by Mr. Balmer

and not two years later Apple launched the iPhone. Even at that time most of

communications' devices - gestures and ALL. 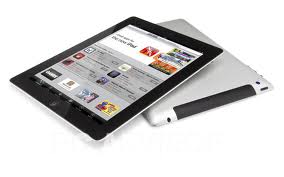 Steve Jobs said at the launch of the iPad that -

Tablets were the future of computing -

and despite the fact that 100 million plus

iPads have been sold to date - I am sure that

Mr. Jobs and his team realised, at that time,

that continuous development of the

implant had been successfully perfected.

"I think it's an understatement to say that

the iPad has been an overwhelming success -

the biggest technology shift of our generation"

education of the so called academically impaired  which have underpinned

iOS’s  impact  on  those  with  impairments

“It’s inspiring to see what educators and students of all types are doing with iTunes U,” said Eddy Cue, Apple’s senior vice president of Internet Software and Services.

“With the incredible content offered on iTunes U, students can learn like never before―there are now iTunes U courses with more than 250,000 students enrolled in them, which is a phenomenal shift in the way we teach and learn.”

As we see too often in politics, people fail to empathize with

those with different needs or priorities than their own.

One has to wonder IF this IS in fact total confirmation of the conclusions which Jaron Lanier has espoused in his epic wake up call - YOU ARE NOT A GADGET !!!???

DELL ready for life back in the founder's hands. Michael Dell founded the company in 1984 with just $1000.00 capital.

It went on to secure a large slice of the PC market before tablets began to eat into the market.

The development of the so-called Tablet Computer has been constrained by the continuous lack of foresight in respect to an appropriate human interface - according to the stage of development of a combination of the diverse technologies required to underpin such developmental foresight.

It was Apple on the final straight - the  company  which  introduced  us to the very  concept of WYSIWYG (what you see is what you get) - who left the rest of the competition "pipped at the post."

In 2010 Mr Dell supposedly unveiled his company's first tablet - but has everybody forgotten the aborted attempt by Microsoft and its hardware manufacturing partners - including DELL - to launch an exemplary "hand-writing-recognition tablet" that could easily have transmogrified into a robust competitor for Apple's range of iOS devices - had Microsoft got their act together in respect of the development of their own operating systems.

DOWN but not OUT - "Competition may be stiff (as it should be), The full extent of the decline of the PC industry has been made clear in the latest quarterly analysis from IDC, which revealed a near 14pc drop in the number of PCs sold in the first quarter of this year compared with last year.

LESS PEOPLE WILL NEED THEM

The most vulnerable group in the market is the whitebox system builders.

“Although the reduction in shipments was not a surprise, the magnitude of the contraction is both surprising and worrisome," said David Daoud, IDC research director, Personal Computing.

“The industry is going through a critical crossroads, and strategic choices will have to be made as to how to compete with the proliferation of alternative devices and remain relevant to the consumer. Vendors will have to revisit their organisational structures and go-to market strategies, as well as their supply chain, distribution, and product portfolios in the face of shrinking demand and looming consolidation.”

In the context of this constant fascination with the idea that Apple is no longer COOL - and further to Apple's opening last month, of their Berlin retail store in a listed building which formerly housed a cinema, Apple have chosen to include the footage of that event in their opening presentation at this years WWDC. The new store is Apple’s biggest outlet in Germany, where it has 10 other shops. The façade of the building on Kurfuerstendamm, Berlin’s main shopping street, is styled like a Greek temple. Inside, iPhones, iPads and MacBooks were on display on tables made of German oak. In the US, Apple has trademarked the glass storefronts, panelled facades, and the oblong tables and wall-mounted video screens inside its shops. Its new Berlin store has a re-designed ‘Genius Bar’, with experts sitting on stools alongside customers rather than facing them. It also has a dedicated space for business customers, in a high-ceilinged room once occupied by the cinema’s café.

Ever since Apple launched its "App Store" in 2008, platforms have waged war on each other to attract the most app developers. In smartphones, iPhone and Android have pulled far ahead while competing platforms like Windows Phone and BlackBerry have lagged behind. On tablets, iPad beats any other competitor by hundreds of thousands of apps.

But now, the app wars are battling on a new front: Wearables as well as IOS remote controlled robotics applications such as real-time car racing.

Sometimes to take a major step forward, you have to completely change direction.

When we began work on the next Mac Pro, we considered every element that defines a pro computer — graphics, storage, expansion, processing power, and memory. And we challenged ourselves to find the best, most forward-looking way possible to engineer each one of them.

When we put it all together, the result was something entirely new. Something radically different from anything before it. Something that provides an extremely powerful argument against the status quo. Here’s a sneak peek at what’s next for the pro computer.

Along with iOS 7.0 for iPod & iPad - the forward march of Apple continues ...

The new iMac has 40 per cent less volume than its predecessor, with a thin 5mm edge. Apple completely reengineered the display for brilliant colour and contrast and 75 per cent reduced reflection. The cover glass is fully laminated to the LCD and an anti-reflective coating is applied using precision plasma deposition.

The judges said: ‘Another Apple product wins, but they continue to set and exceed their standard with simple, visual cleanliness of design, lack of fixings and incredible attention to detail which belies the engineering efforts involved.’

“What will the future PC look like and what hardware will

Apple has retained its title as the coolest brand in Britain, while

big luxury names have pushed everyday products out of favour,

according to an annual survey. The CoolBrands list sees sports car

manufacturer Aston Martin roll in at second place, with Rolex

clinching the title of the third coolest brand in the country.

which means it can be moulded more easily than steel or aluminium,

for example, and is more hard wearing.

the company could use this alloy, along with 3D printing, to quickly

manufacture the casing for new devices.

Liquidmetal is a mix of titanium, nickel, copper and zirconium among

other metals making it tough, light and scratch resistant. It also feels

as smooth as glass. Rumours about Apple using liquid metal have been

around for years after the company signed an exclusive deal with

specialists Liquidmetal Technologies in 2010. The new patents have

fuelled these claims further and follow rumours that Apple is also

looking into using sapphire crystal in future versions of its displays.

These rumours were similarly started after Apple signed an exclusive

I CONTINUE to BE BEMUSED, however, by virtue of the fact that

Apple's CORE WATCH design is rectangular in shape, in the

proportions of an iPhone or an iPad - BUT this watch DESIGN

from ALCION*DESIGN has stuck with our species long-standing

'connessione' with TIME, which has for so long been a RE[flexion]

of the sun, moon and stars SPIRALLING CIRCULAR movement

around the extremities of the COSMOS. 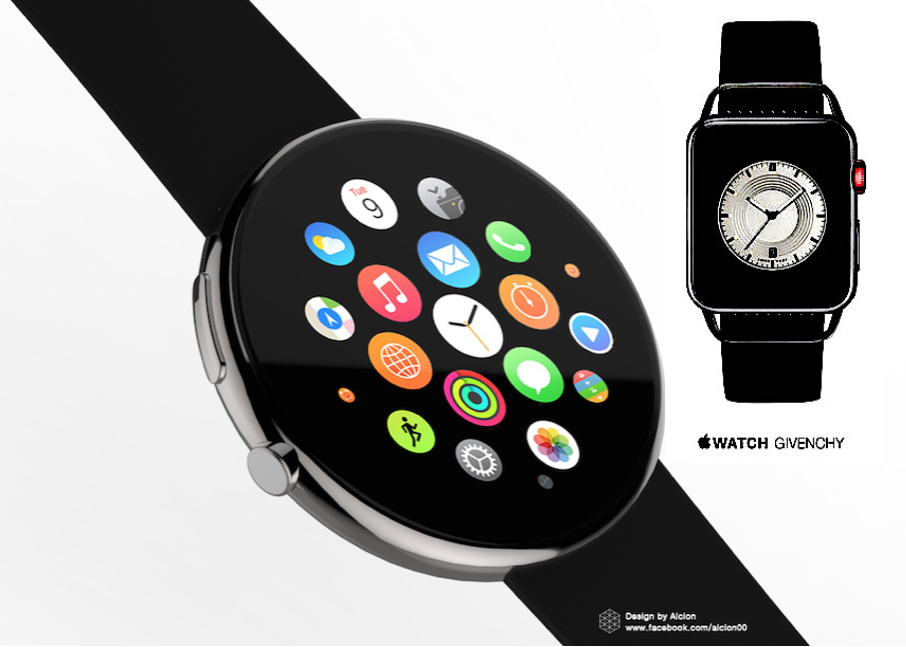