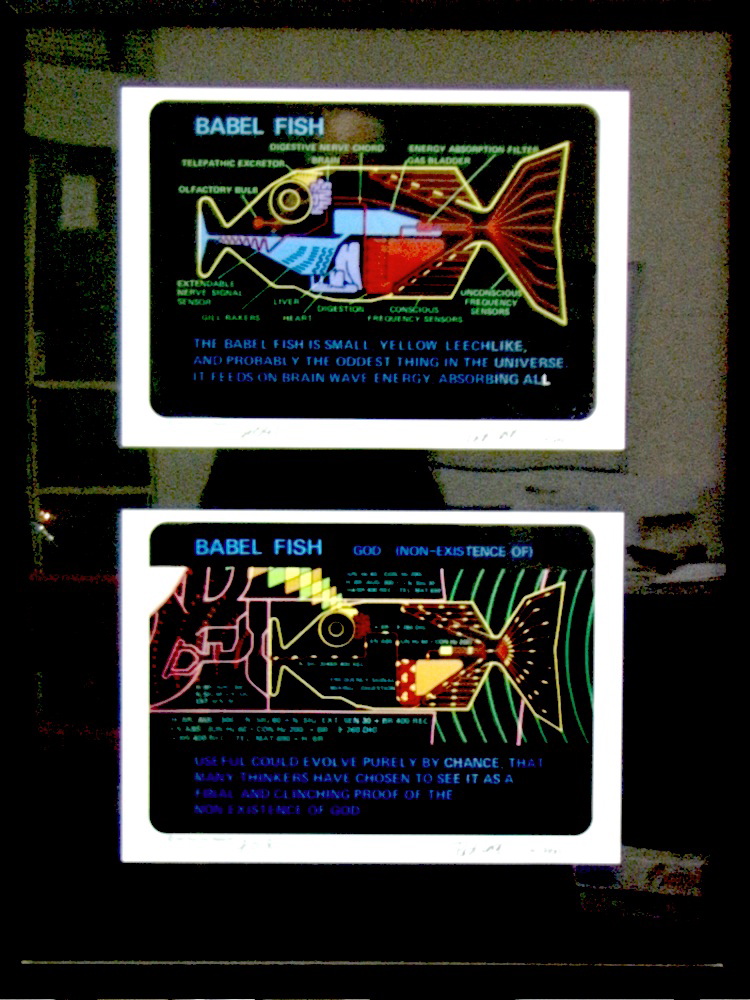 Douglas Adams explains how and why the animated "computer graphics"

in 1980, where an ingenious contraption gave the Guide its imagery in that

HitchCon at The Royal Festival Hall, London, 2009. It also appeared on the

Hitch-hikers Guide to the Galaxy

Surely, in the context of The Theory of Everything - which has resulted from

will serve to remind us of the need to ask -


views (427)
Tagged with: theory of everything, ba'bel, why we fight, jigsaw, zaadz

even if  IT IS truly "a proper cup of tea"


ART is your particular telling of reality. When we talked about letting go of preconceived ideas and drawing what you actually see, Bernhard
compared it to a night out with one of his friends. While Bernhard might
just recount that night by saying, “We went out and had some food and
went home”, his friend might have noticed a lot of interesting details that
Bernhard didn’t, and tell a story with those details in a way that’s hopefully both interesting, sometimes "moving" and occasionally hilarious.
.
Same experience, different interpretation, different details. I was involved with Wayne Barsanti, during the mid to late 1990s, in a company

called - Image-in-IT, and continue to know and work with Wayne since we

closed the company. I was the technical partner and Wayne managed the sales

Image-in-IT was established on the back of a very profitable Networked Apple Macintosh based On-Demand-Colour business. Microsoft Windows NT networking had been utilised from the outset and Image-in-IT, in collaboration with Microsoft and Digital Equipment Corporation (DEC), developed a potentially lucrative prototype of a Windows NT based version of - a top end Apple Macintosh On-Demand-Colour workstation and print solution.


Unfortunately, Microsoft were unable to develop their software, within the timescale of the window of opportunity open to us, and Digital Equipment Corporation (DEC) were taken over by Compaq & subsequently both by    Hewlett Packard (HP). The licence agreement between DEC and Samsung    ended such that we could not guarantee long-term supply or support for        the DEC Alpha chip-set on which our competitive workstation was based.

Rod now works on his own from his studio in the Windsor and Maidenhead area of Berkshire. In addition to animation work he    also undertakes multimedia and web site commissions with applications such as Dreamweaver and Flash, image origination      and retouching with Photoshop, animation and video compositing  with AfterEffects, video editing with Final Cut Pro and Cinewave,     3D modelling with FormZ, 3D animation with Electric image, and   DVD authoring with DVD Studio Pro. Between 1996 and 2009 there have been one ETMA and four IVCA awards.

The most recent 2009 IVCA Bronze for Internal Interactive Media was for "BP Atlantis" produced by Myriad Global Media. This also received    a Highly Commended for Best Animation and Graphics.

Rod also provided the interface design and graphics as part of the Radio4 Interactive team that updated Douglas Adams’ web game of “Hitch Hikers Guide to the Galaxy” winner of the prestigious 2005 BAFTA Interactive award.