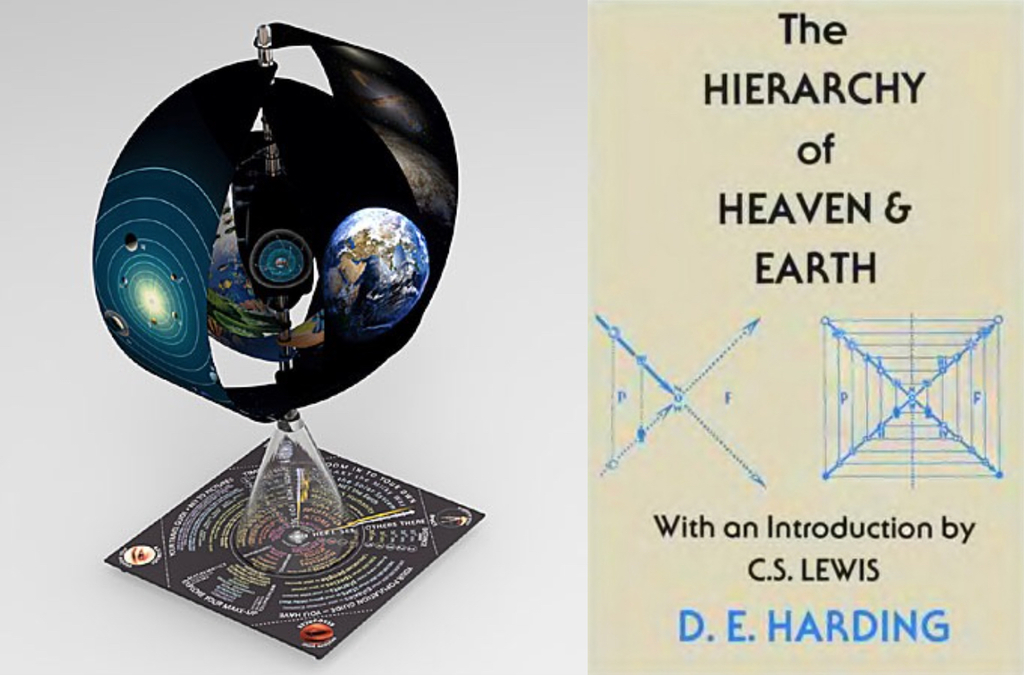 Douglas Harding - Author of The Hierarchy of Heaven and Earth
with an original Introduction by C.S. Lewis - can be no better Introduced
than by Richard Lang at The Headless Way 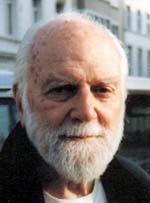 “I am what I look like. These six little words are big enough to cover the whole reason for our plight. They say it all. Or, to elaborate somewhat: I am here, for myself, what I look like over there, to you - as if our distance made no difference!

On this morass you and I try to build our lives. No wonder they are cracking up. To render them safe and sound we must rebuild them on the bedrock of I am what I see I am here; what you see is just one of my regional appearances. I alone, at centre, am in a position to say what those myriad appearances are appearances of, and how different they all are from the one Reality that's given rise to them, from what I am looking out of. On this I am the sole and final authority.” 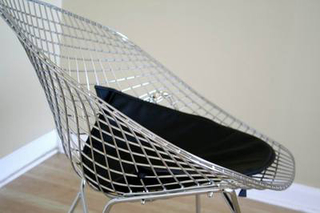 Douglas Harding was born in 1909 in Suffolk, England. He grew up in a strict fundamentalist Christian sect, the Exclusive Plymouth Brethren. The ‘Brethren’ believed they were the ‘saved’ ones, that they had the one true path to God and that everyone else was bound for Hell. When Harding was 21 he left. He could not accept their view of the world. What guarantee was there that they were right? What about all the other spiritual groups who also claimed that they alone had the Truth?

Everyone couldn’t be right.

In London in the early 1930s Harding was studying and then practising architecture. In his spare time, however, he devoted his energies to philosophy - to trying to understand the nature of the world, and the nature of himself. Into philosophy at this time were filtering the ideas of Relativity. Influenced by these ideas, Harding realized that his identity depended on the range of the observer – from several metres he was human, but at closer ranges he was cells, molecules, atoms, particles… and from further away he was absorbed into the rest of society, life, the planet, the star, the galaxy… Like an onion he had many layers.

Clearly he needed every one of these layers to exist.

But what was at the centre of all these layers? Who was he really? 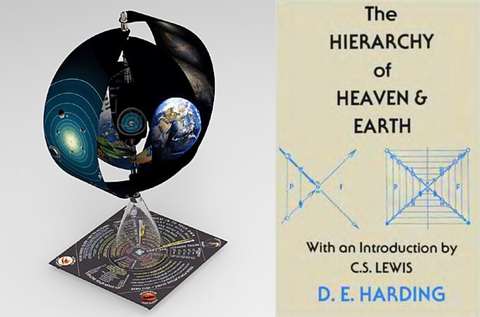 The Youniverse Explorer model illustrates what we appear to be - what we are - at increasing distances from zero distance at centre. It also shows what we see as we look out from zero distance into the increasing distance. We have a variety of beautiful layers, hierarchically arranged. The planet Earth is one of our layers - You have a unique human face, and a unique planetary face!
.
Designed by Douglas Harding
in the 1970s.
.

Remco van Santen said in comment to this Youniverse Model

A nice graphic explanation by Douglas. Max Planck, the first of

the great quantum physicists,  said - "There is no matter as such.

minute solar system of the atom together. We must assume behind

this force the existence of a conscious and intelligent mind.

This mind is the matrix of all matter."

So could I deduce that quantum mechanics actually describes brain

activity, a cognitive illusion that interprets nature from observing as

an experience of seeing with objects labelled as "electrons", "protons"

etc, even more recently as large molecules?? If so then will the final

explanation of the cosmos come from discoveries of cognitive

neuro–science and not from physics?? Do we indeed carry time and

space ( space[TIME] ) like the shell on the turtle? So call it headless,

call is what you will, we are just consciousness with a little dangly

thingy as me as sub-consciousness? Just a thought.

does make matters considerably more understandable, however,  in this latest technological age.

Viewed from a neighbouring galaxy I who am nothing but capacity here at centre, manifest over there as a spiral galaxy - the Milky Way. Spinning majestically like a slow Catherine wheel I am composed of perhaps 100 billion stars and am about 13.6 billion years old, give or take 800 million years! I am a fairly large spiral galaxy some 120,000 light years across and 3000 light years thick in my centre. I live in a cluster of about 30 galaxies known as the Local Group, the other large galaxy in this group, the Andromeda Nebula, being about 2 million light years away (from the Earth). Currently I am colliding with a small neighbouring galaxy, the Sagittarius Dwarf Galaxy, but not for the first time. It will probably pass through me without causing any serious damage. The most distant group of galaxies I've so far discovered is 13.5 billion light years away. I am one among 100 billion or more galaxies (who knows?) rushing outwards from some mysterious primal explosion.

The Hierarchy of Heaven and Earth

A View by Richard Lang