KODAK is not the only household name 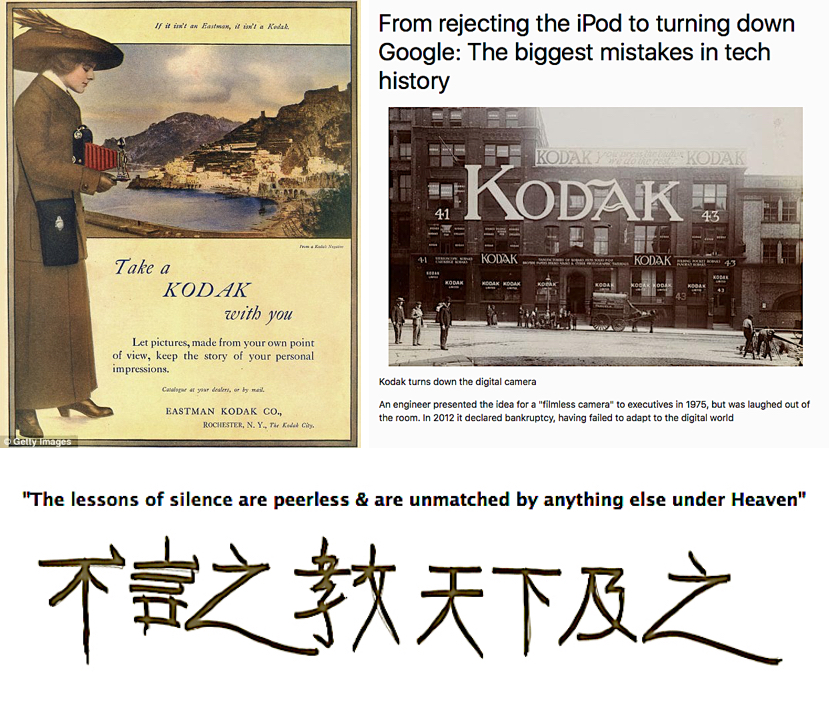 to have seen its market position devastated

by technological change, the shifting tastes

of their consumers and economic turmoil.

"It may have failed to foresee the explosion of digital photography

– ironic, given that it has been credited with inventing the digital

camera in the 1970s. It may have sought refuge from the decline

in film photography in businesses where its understanding was

not perfect, including medical diagnostics.

And its recent strategy of trying to sell digital imaging patents,

commercial printers, has yet to deliver the goods.

responded to the march of history. Britain’s Rank Group, for example, has for more than

70 years been in and out of film-making, photocopiers, pubs, restaurants, nightclubs,

Today it is a gaming company involved in bingo, casinos and phone and internet

During more than a century of existence, Finland’s Nokia progressed from rubber

in mobile communication devices. Today it is fighting to retain its position after

Elsewhere in high technology, Hewlett-Packard has stayed on top of the computer game

by constantly refining its products and activities, while Apple became a global giant

by transforming itself from a computer firm into a supplier of must-have electronics.

Not every tale ends happily. Bookshop Borders was pummelled by online book sales and

e-books and went bust. Most of furniture chain Habitat went into administration last

year. Other victims include Focus DIY, Oddbins and Woolworths.

Polaroid, once also a big name in photography, saw its instant-picture business brought

to its knees by the digital age. Its last plant closed in 2008 as it filed for bankruptcy.

Former employees have brought Polaroid back to life. It is a niche product, but that

has to be better than having no product at all."

from the purgatory of the last 18 months in bankruptcy.

The fact that here we are, barely 3 years later, considering the application of an IDEA of SURVIVAL,

Corporate Vision; and many moons before that rejected by Encyclopaedia Britannica, following

enough to the concept that GOOD DESIGN IDEAS never date if they are rooted in NATURE.