Community on the Bottom Line 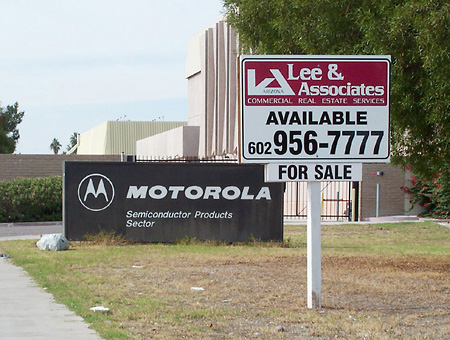 Posted on Dec 28th, 2006 by martha
.
BUILD COMMUNITY - BUILD LOVE
Just today I drove by a 75-acre vacant lot at Broadway Rd. and S. Dobson Rd. in Mesa, AZ. A couple of years ago the site was a Motorola fabrication complex, producing semiconductor chips. Now it is an absolutely flat, barren wasteland relieved only by the emergence of an occasional weed. The TCE pollution of the groundwater is not considered serious, because people do not use that particular ground water flume for drinking. The "useless" and "outmoded" forty-year-old buildings have been demolished, and every piece has been hauled away. The thousands of people who used to work there have gone on to do something else. The community partnership projects (Motorola is a good neighbor!) were abandoned before the last file box was toted out the door.

This is our southwestern version of the rustbelt. The story is pretty much the same everywhere. Evidently it's tough competing internationally, especially when a company must pay U.S. scale wages and maintain health benefits for employees. A corporation must find workers where it can afford to pay the going wage-and that could be just anywhere in the developing world. Such a move makes sense, as long as the right-thinking and forward-looking managers get to pack their golden parachutes before the Flight begins.


Perhaps we're tired of talking about the situation. There seems to be nothing we can do about it. These changes are necessitated by the globalization of business. But I'm going to talk about them at least one more time. Maybe out of respect for the human suffering involved, or maybe because, like a rat running across the wreckage of something that used to be a hub of human creativity and endeavor, I simply have my own a point of view.


I used to work at Motorola, Mesa, too. I didn't make semiconductor chips-nothing that central to the project. I was a speech coach-a consultant. They used to have a competition among the various work groups to determine which area had developed the best process improvements-cutting costs, enhancing safety, improving the speed and efficiency of production. Not only did the teams create and implement an improvement, they presented it using PowerPoint, video, diagrams, music, and group presentation techniques. Groups would go to the length of hiring a coach to coordinate the preparation of their
presentation.


From the perspective of my "rat view," I remember the moods that characterized each phase of project development, from those first meetings that were (honestly) a little boring ("OK, let's talk about public speaking!"), through the tension-building timelines that asked for commitment and performance; and then the day of the actual competition!-everyone proud of their team's innovations, nervous about their contributions, giving their absolute best to their presentations. The darkened auditorium swirled with people connecting, whispering, leaving to pin down one last tiny detail. Groups met and migrated from the lobby to the seated rows. From the screen, PowerPoint slides and video clips flashed, demonstrations boiled like science fair experiments, music pounded, speakers joked, and the Mighty Judges sat seriously evaluating everything.


And where is all of that, now? I see the dirt that used to support the buildings that we worked in. It's unearthly and unGodly. There hasn't been a war, or a plague or a fire. People agreed to this. People agreed that whatever could be accomplished by these individuals working together in this place was not nearly as important, and certainly much less profitable, than tearing it all down. The people, of course, have more-or-less survived. There are a lot of fifty-something guys out there watching a lot of daytime TV on early retirement-a lot of people who really know a great deal about electronics production. The more flexible among them are back in school, learning "marketable" skills in the health field.


Motorola used to tell us what a good community partner they are. Television commercials showed teams of people in Motorola T-shirts working at the food bank, playing with kids after school. One of the advantages of getting to know people who worked at Motorola was being able to tap them for help with community projects. Because they had the support of their employer to spend time in the community, these kind people were happy to appear and do their best.


One place where Motorolans showed up and did their best was Bev Tittle-Baker's. Bev is a whole story in and of herself, but I'll bring you in on a warm June morning in 1999. It's 9:30 a.m., and already it's 98 degrees. The picnic tables in Bev's worn and rutted backyard are lined with more than 40 neighborhood kids who are waiting for today's project. This is their summer program, and without this summer program, they would do God-knows-what. Their parents often leave for work by 6 a.m., and usually don't return until the evening. When the guys and gals from Motorola show up to talk to them about "being an engineer," there's so much more going on than just interaction with a guest speaker. The kids are genuinely thrilled that someone has come to spend time with them. They listen attentively-not only because this visit gives them more to think about than whether they want to be "a basketball player or a lawyer," but because their Motorola visitor is a real, live human being from that complex, impenetrable and almost invisible (to them) world of their own greater community. I learned that summer that the kids were surprised that anyone-especially a person with a full-time career other than their teacher, would want to spend time with them. The engineers were surprised by how welcome their visit was. This being present for each other is an important piece, weaving a real and necessary connection.


Community is built relationship by relationship, and it functions through trust. Every person has a part to play in building the connectivity of a live and healthy community. If nobody says "Hello!" to the kids, shares their knowledge, listens to others, then all that is left is a hollow and alienated shell. A business prospers because of the community that supports it. The community provides infrastructure for access to energy, water and communication, the physical location, builds the plant, provides the labor. Profit is seen as the rightful gain of the shareholders, but the community also profits. A plant creates many jobs that increase the net money circulating in the community, generating other businesses, such as retail stores. When a plant leaves, the impact on a community can be devastating. Since the community helped the plant to prosper, doesn't the community hold some type of interest in the commercial enterprise? Since there are thousands of relationships of trust that are disrupted when a large business closes its doors, would that situation not require some type of accountability? Does it make any sense at all to destroy the fabric of a community so that managers and shareholders can realize incomes more than fifty times that of the average community resident, while the residents face actual hardships? Is it alright for business owners just to "move on" and let their attorneys worry about whether the water flume can be cleaned without releasing cancer causing toxins into the air (in the working-class part of town)?


My concept of healthy business is one in which a healthy community is part of the "bottom line." That "line" that we're threatened with, the one that "kooks and liberals" like me are too stupid to understand, simply represents a value system. If creating the absolutely highest dollar profit, so that investors and executives can live really, really well, is valued, then that becomes the "only rational goal." If the value is creating enterprises that use available human potential to create products, support livelihoods and build community, then that becomes a rational goal.

This is what I know is true: It's not that U.S. businesses couldn't make a profit staying in the U.S., it's that they couldn't maximize their profits.

Somehow, over the past 200 years, Americans have forgotten that We the People are America, and that our country can really be By us and For us. We can talk about it, and we can vote.

This is a beautifully rendered heartbreak of a story, martha….I know of what you speak. Intimately. And you are right. “We can talk about it, and we
can vote.”


We vote not only on election days.


We vote each and every time we take out our purses and wallets….every consumer choice is a vote for what we have decided is “of value” to us….So what is it that we “value”? How much are our
communities worth to us?


Thanks for putting this subject matter on the table.

MY OWN PERCEPTION of the potential of global interactive televisual communication, from the outset, was one which did not subscribe to an advancement of the inherent greed & perversion of perception of those
that are responsible for the control of the species mindset …

Having exported all the technological jobs - like those at Motorola - to China, we now face the dilemma  of NOT being able to control the self-interested, do what I say not what I do, greed and power of a nation which has had corruption built into its collective DNA for the last 3000 years. How on earth can we expect such a beast to adhere to the same set of values and principles which we ourselves have begun to put to the back of our minds during our relentless submission to the HIDDEN PERSUADERS which lies at the core of our "built on growth forever" evolutionary capitalism of the West.

It's only a new financial system that will potentially be able to bring back those lost jobs at Motorola, having accepted that the end of sustainable growth is here to stay.

To quote BIG RON commenting at the Telegraph -

But the real issue goes deeper. All the bailout mechanisms under the sun cannot make the euro-zone work (- or indeed any other example of printing money for the purpose of making loans to pay off previous loans - which then have to be ALL paid back with interest.)

Such bailouts are still, in the end, loans. Even if the interest rates are set very low, interest is due to be paid and the debt eventually to be repaid.

What would make some difference is if the money provided were not some sort of loan but rather an outright gift. Such gifts can be made in advance (although they rarely are) or after the event, when they are called write-offs. Sometimes a recipient itself turns what was once a loan into a gift.

This is called a default. But northern countries understandably don't want their past loans turned into gifts, and they don't want to be forced to make new gifts until the crack of doom.

The best and the most beautiful things in the

world cannot be seen nor even touched, but just

felt in the heart.