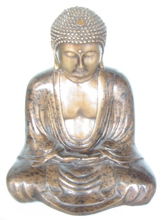 Why the next Buddha

will be a collective

THE seed of ZEN travelled from INDIA to CHINA

and thence to JAPAN

and thence THRU' the USA to the UK

the message of the lotus has been received !


THE PRACTICE of ACTION … indeed

as a SENSE of SELF

“It is better to conquer yourself than to win a thousand battles. Then the victory
is yours. It cannot be taken from you, not by angels or by demons, heaven or hell.”

IN the context of the even heavier burden of hope BEING placed on Barack Obama and, Rahm Emanuel's statement, as Obama's Chief of Staff elect, that …

” You NEVER WANT a serious crisis to go to waste ”

IT IS NOT just encumbant on Barack Obama to take individual responsibility of ACTION in the face of CRISES that have come home to roost, BUT …

A NEW MODEL, which Robert Peston says we so badly need.

ITS these very processes of life - that have to be understood

and acknowledged - before we can awaken to the fact that we

until WE awaken yet again to being fully enlightened -

and in so doing START ALL OVER in the NEW beginning !