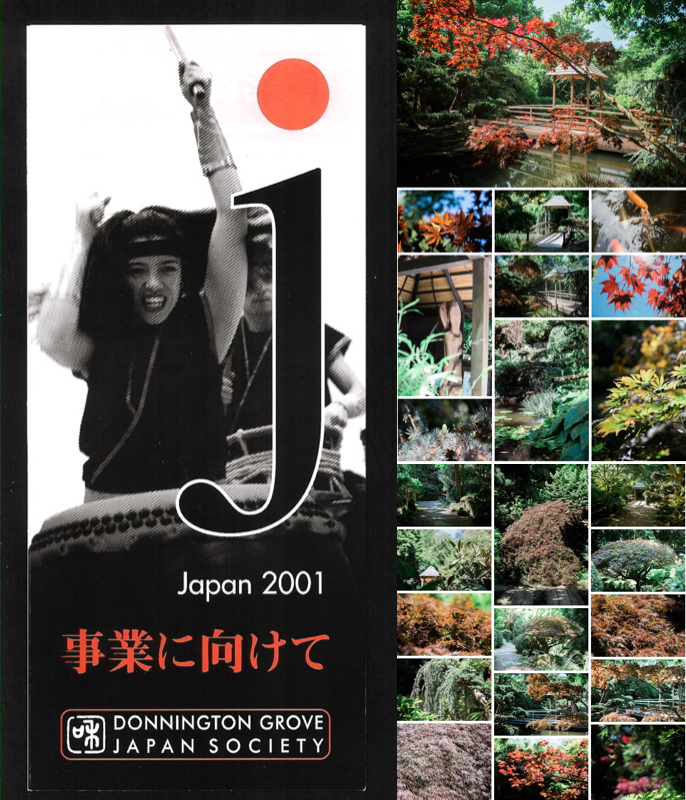 " During 2001, events will be held throughout the UK - to celebrate and expand the links between Britain and Japan and introduce Japanese culture to a wide UK audience.

Britain is the main pillar of Japan's relations with Europe, and Japan lies at the centre of British policy towards the Asia Pacific region.

Japan 2001 - will develop these relations further and will also increase mutual understanding and appreciation between the people of these two countries.

During the year of Japan 2001 over 3000 events will be held throughout the British Isles and will include not only the arts, but also education and sport. - one of which was a workshop in Japanese calligraphy with Rie Yanagisawa ...

which my soul-mate and I attended and experienced Japanese culture first hand - care of those at New Greenham Arts, Greenham Park, Newbury, in Berkshire.

On other occassions throughout the year we also attended an exhibition of contemporary watercolours by members of Yoka, Bunka-Shinko-Kai from Tokyo & ceramics by

topped off with stupendous taiko drumming.

... and in contrast to the Dragon Yang -

Shuko in the time of the aesthete Shogun Yoshimasa. He invented the ceremony of tea

a profound influence on both 'tea architecture' and on Japanese aesthetics as a whole.

He promoted spiritual ideals of 'harmony, respect, purity and tranquility ' and in 1582

built his tea room, the Tai-an, in a hut in his native Yamazaki. To this day tea men

maintain that it is the unique aesthetic experience which integrates the spirit of ZEN,

the beauty of art and of mundane things." - Joan Stanley Baker "Japanese ART"

"Let us take a homely illustration, the simpler the better. Each of you, let us say, had

breakfast this morning. While you were eating it you were conscious of it, how it looked

and tasted, and these states of consciousness were imposed on your minds from the

your nerves of sight and taste. This action is as constant as any other purely mechanical

action, and if your sensory and nervous machinery is in normal running order, the

resulting states of consciousness are as constant as the cause that produces them.

All these forms of consciousness, I repeat, were imposed on your minds from

without in the form of distinct sensations, as we call them, sensations existing

at that particular time and place." - William Sturgis Bigelow - "Buddhism and Immortality "

ceremony. Assuming the position of tea master at the age of 58, he brought the concept

The Japanese call this attitude Ichi-nichi issho : 'EACH day is a LIFEtime.'

We arise in the morning newly born.

As we pass through the day, we age and gain experience.

When we tire at day's end, we 'die' and take our rest.

That one arc serves as a miniature of our entire life."

an extremely successful project. The breathtaking spectacle of the monumental

work in ‘Textural Space’, assimilating aspects of architectural space including

construction, light, materials and perspective was made possible through the

technical facility of the artists. The artists brought together a combination

of material understanding and intention that the completed work would work

in harmony with its surrounding space.


.
I know of no better "black & white" truth of this statement
than the exquisite photographic genius of Michael Kenna

The ART of ZEN , left-handed calligraphy & the TRUTH, BEAUTY and GOODNESS

Following the 2011 Tsunami in Japan - Takenori Noda, the Major of Kamaishi town in north east Japan, said - “We thought we were at the cutting edge, but the tsunami was taller than we anticipated,”   and went on to conclude - “The biggest lesson we should learn is NOT to be complacent.”

As Philip Aldrick has written in his Daily Telegraph article entitled -

"If Japan - where experts fear a debt and deficit disaster -

is Britain’s future - there is much to fear."

“On the 400th Anniversary of Japan-British Relations: The Arrival of the English in June 1613, and What Happened Thereafter.”

An overview of the year and what next…

Indonesia-based price comparison site Telunjuk has landed an undisclosed round of funding from Japan-based Venture Republic, which marks the firms’s first deal in Indonesia.