PERCEPTION is the MEDIUM 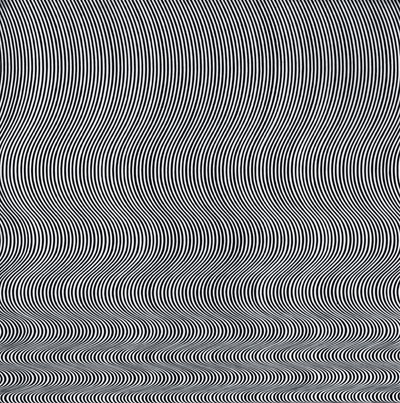 "Perception IS that part of us that perceives - whether it is things
outside of us in the physical 3D world or things on the inner
planes. Some call this the Witness or the Observer" -  Lucia René
"Perception has nothing to do with the mind. Perception simply perceives. It is a sort of flashlight of awareness that we shine on things as we observe the flux of energies within or without. It is completely devoid of thought. And, perception is present even when there are thoughts in the mind.

Intellect, on the other hand, takes what is perceived and brings it down into the conscious thinking mind. It's a very useful faculty we humans have been given, part of the package we acquire when we take embodiment. It's a tool that resides 'in the attic' and, when used properly, helps us solve problems, make grocery lists, and figure out how much tax we owe.

The bottom line is this: thought impulse arises out of the sea of pure awareness and manifests as a thought. If you really slow things down in your meditation and clock what happens, you can observe an impression rising, a thought formulating, and the thought relaxing as it falls back into pure awareness.

What is useful to understand here is that Bridget Riley's paintings are not
just logically enlarged transferences on to canvas of drastically simple
juxtapositions among smaller basic shapes, dots or line in rhythmic
movement first set out on paper in neat little sectional patterns. Her paintings are acts of imagination in precisely
the same way as a Mondrian or a Botticelli.

Bridget Riley is about the changes - progressive, sometimes abrupt,

sometimes apparently disastrous - that can take place in a given situation.

The situation is presented in the  simplest possible terms

The experience which Riley offers is closely related to the expression of emotion or, more exactly, to the creation of visual analogues for sharply particularized states of mind.

MY final paintings are the intimate dialogue between my total being and the visual agents which constitute the medium. My intentions have not changed. I have always tried to realize visual and emotional energies simultaneously from the medium. My paintings are, of course, concerned with generating visual sensations, but certainly not to the exclusion of emotion.

Riley began to paint pure geometric abstract canvases in 1961. Her first works were painted in a black and white palette and were concerned with variations in shape rather than tone. This period of the artist’s op art practice is represented in Tate’s collection by Fall 1963 (Tate T00616). 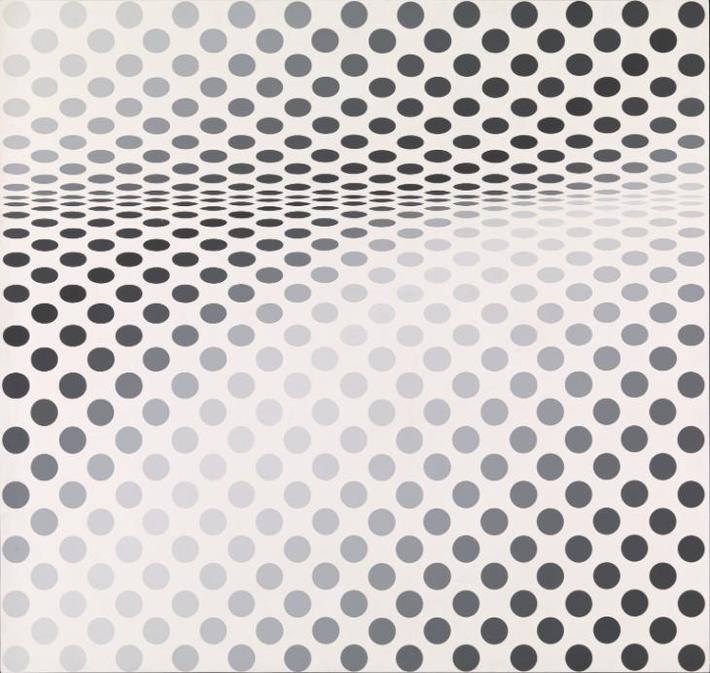 In 1964 Riley introduced variations in tone into her work, composing a series of paintings, including Hesitate, from a full palette of grey. Curator Paul Moorhouse observed that this imbued Riley’s works with increased subtlety:

.
... or referring to Bridget Riley's later work - The Battle of 256 Shades of Grey !
.
Edward de Bono would no doubt offer his water logic of perception
as a direct challenge to the rock logic of rigid categories, absolutes,
argument and adversarial point-scoring.
" Widespread among human habits is the perception that we are human beings having a spiritual (consciousness) experience. We need to turn that perception on its head. We are beings of consciousness, living in a realm of information and having a material experience – not just a human one, but an experience of participating in the entirety of material creation.
.
The universe is continually generating fresh knowledge of itself, creating new structure and new relationships. So too are we – embedded in it, and it embedded in us."
Jon Freeman
.
On the other hand - as William Blake once said - If the doors of PERCEPTION
were cleansed - EVERYTHING would appear to man as IT IS - INFINITE
.
.
First pPosted by Michael Grove @zaadz on March 5, 2007 at 13:00
. 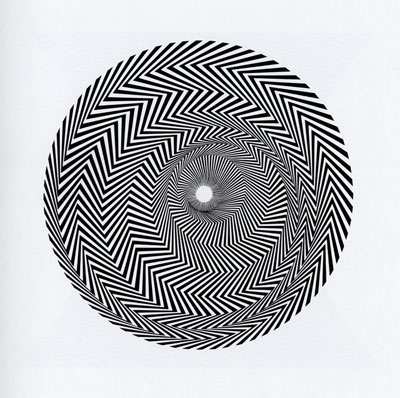 The expression ”sense illusion” proves that we are not yet fully conscious, or at least have not deemed it necessary to incorporate the fact into our ordinary language, that the senses represent things neither wrongly or correctly. All that can be truly said of the sense-organs is, that, under different circumstances they produce different sensations and perceptions. As these “circumstances” now, are extremely various in character, being partly external (inherent in the objects), partly internal (inherent in the sensory organs) - and partly interior (having their activity in the central organs), it can sometimes appear when we only notice the external circumstances as if the organ acted differently under the same conditions.

and IT IS customary to call the unusual effects, deceptions or illusions.

The Most Amazing Optical Illusions

PERCEPTION is NOT about capturing a full picture of reality,

but taking snapshots of the world and making the rest up.

As Ian Gardner has stated in his The Illusion piece from The Milk Is White ...

If we are shown a green leaf and asked what its colour is, we will reply that it is green. However, it is not green. It only appears to be green because it absorbs all but that part of the light spectrum that makes green, and that is the part that is reflected to our eyes. A beautiful butterfly wing is not beautiful at all; it only looks that way because the tiny scales on the wings are angled in different ways to create different colours.

This article about attention is most interesting.


I mentioned the magican and mentalist Gerard Senehi who is closely connected to EnlightenNext here:


This whole nexus between intention, attention, purpose and perception, conception and perspectives is worth massive research.

MY OWN PERCEPTION of the potential of global interactive televisual communication, from the outset, was one which did not subscribe to an advancement of the inherent greed & perversion of perception of those that are responsible for the control of the species mindset …

I raise this issue in apology for the fact that The Battle of Light and Dark YouTube video, which was selected as a perfectly supportive piece of ACTION for this zBlog@gaia, has now been removed and been replaced by a selection of potentially mind-perverting alternatives.

Perception is a kind of improvised dance with the world, a dynamic interaction between my sensing body and the sensuous landscape. Simply to be gazing the blue sky, or watching those storm clouds approach, IS already to BE in relationship, to be participating in an active exchange between my body and those roiling clouds.

Psychologists typically make a distinction between sensation and perception. Sensations are uninterpreted sensory impressions created by the detection of environmental stimuli, whereas perception refers to the set of processes whereby we make sense of these sensations.

Perception enables us to literally navigate through the world, avoiding danger, making decisions, and preparing for action.  Visual perception has received the most attention from researchers, and then speech.

Peripheral drift and other types of illusions are often presented purely for amusement or as psychedelic art. However, optical illusions are also used to study how the human brain interprets visual data. From studying how these patterns create perceived motion, we can better understand how the brain interprets motion. We can also gain knowledge about how a damaged brain fails to guide an individual's movement when they have difficulties perceiving motion in their environment. Motion illusions can be used in virtual reality (VR) as well as augmented reality (AR) applications, to properly guide individuals with problems tracking movement. Various types of optical illusions are used for a number of effects in VR and AR. 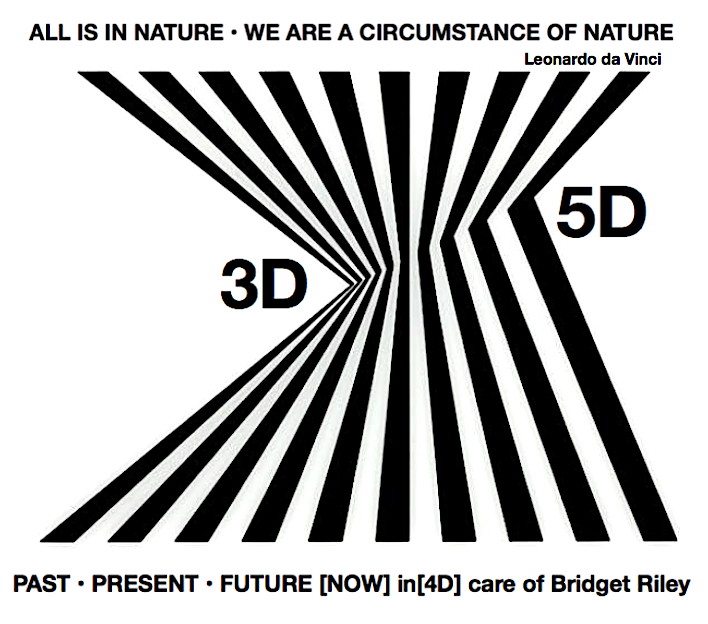 The [UN]knowns beyond space-time which create everything

... and herein lies the connessione twixt Riley and Fuller because Bridget Riley is about the changes - progressive, sometimes abrupt, sometimes apparently disastrous - that can take place in a given situation.