QUEEN buries hatchet with the Mohegans 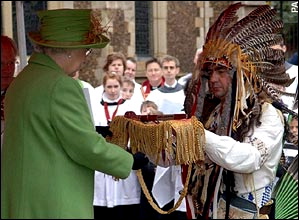 In the context of this year being our Queen's Diamond Jubilee -

to Her Majesty, as a "thanksgiving" for her stalwart and dedicated

service for the last 60 years.

the “seed” which Brian planted a year ago – has already grown to more than 32,000

which now needs to be inter-connected with every other piece - to the mutual benefit of ALL.

It is equally appropriate to recollect the Hopi words Koyaanistqatsi, Powaqqatsi & Naqoyqatsi and the Qatsi Trilogy of movies that were begotten by those words - and in consequence the subtitles ...

LIFE OUT OF BALANCE - LIFE IN TRANSFORMATION - LIFE AS WAR

My favourite pics of Her Majesty the Queen
As I have said elsewhere the world comprises of those who understand – who need no explanation - and those who don’t understand - for whom no explanation will suffice.
.
It has always been my goal in LIFE to envisage and establish “art of the possible” technology-based solutions to enhance the process of communication with those who don't understand – regardless of the potential of babel-like misunderstandings.
.
I have also said elsewhere that technology has always – throughout history provided the basis of solutions to all the problems that Homo sapiens has faced – and that it has been artists who have discovered and demonstrated the beauty of technology – in song, dance, music, poetry, painting and drawing.

At about the time I made my statement to Kenneth Baker – Chris Curry at Acorn Computers used to say to me that I was too free with my information – to which I replied –
"however much information I freely give, a hundred fold will return."

Since then I have evolved my own understanding to encompass the fact that if ONE is equally free with knowledge – it too will be returned a thousand fold – and if free with the ideas which create wealth – a ten thousand fold return will pertain.

Upon the launch of Philips Laservision – I was involved in an evaluation of the active play characteristics of this system - & was amazed by the capability of the human brain – to assimilate the content / juxtaposition / & context of everyone of the 10, 000 still images of a 16 minute sequence when viewed at a rate of no more than 10 frames/sec….

& finally Tim Berners-Lee used all of these ideas - which spawned the Apple Macintosh and Hypercard – to facilitate the creation of the World Wide Web – for the mutual benefit of ALL – completely FREE of CHARGE.

The IDEA of IDEAS - which I am now beginning to freely spin into the public domain as the web of zaadz – will, I anticipate, establish the mechanism by which we can ALL change the world together.
Hail and thanks to the Mohegans & the Hopi & their symbolic pipe of peace
Hail and thanks to Francis Ford Coppola & George Lucas Hail and thanks to Tim Berners-Lee & especially Brian & ALL his supporters, friends & associates
Have a Happy Thanksgiving – looooonnnngggg week-end

Hail and thanks - also - to Marc Cantor for VideoWorks, Lingo, Director & Flash - and the ramifications of such developments for the future of Adobe & Universal 3D

And hail to you Michael for a wonderful blog entry about the Mohegans. I have invited others to read this entry by putting a link here. Have you seen my blog entry on Freeware Stuff on the Net where you can find the link to a free
Google Sketchup
http://sketchup.google.com/
Whether you have any previous experience or not, you can create stunning 3D pictures and models with a few clicks and drags of the mouse - plan out your dream home or replicate the Empire State Building. You can add objects, colours, effects and lighting, and what's more it's completely free to use

Thankyou SAMME - a very good 3D package which can export into Universal3D format and thus be displayed and “flown through” as a component part of an Acrobat PDF document - which can be sent anywhere in the virtual electronic world - as an attachment.

In syncronicity with Michael's emerging vision, however, ONE must consider the U3D format in the context of this entirely NEW method of communication being a - Universal Gift

Her Majesty the Queen is not known for her avid interest in matters economic and financial, but in 2008 she asked: ” WHY didn't any-one see this coming ? ”

” In fact, They DID. It is true that no one saw the whole caboodle, but many did see large parts of it. The trouble was that their WARNINGS went UNHEEDED.”


IF ONLY the leadership of the People of the USA could ”bury the hatchet”, so to speak, in respect of the issues raised by Dee Brown's 1971 classic - Bury my Heart at Wounded Knee and HBO's 2007 DVD release; and finally make a gesture to acknowledge, on behalf of the nation united, a REAL COMMITMENT to address what Justice Blackmum described in 1980 as “a more ripe and rank case of dishonarable dealings will never, in all probability, be found in our history”.

ONLY THEN, through leading by example, will the nation of the USA win enough respect from the other nations of the globe to truly address the very real problems of establishing PEACE on EARTH.


In the context of our Holographic Multiverse of Parallel Universes

i) WE MUST know the truth to act wisely, and truth comes from physical reality.

ii) Our present and past societies are not founded on truth and act unwisely (overpopulation, destruction of nature, pollution, climate change, religious and economic wars, etc.).

iii) WE NOW KNOW the correct language for describing physical reality (all matter interactions are wave interactions in space), and this knowledge IS critical for our future survival, BEING THE SOURCE of truth & wisdom.

The BBC are no longer "FIT for PURPOSE"

Mark Thompson's response to the Parliamentary select committee yesterday - was all that could have been envisaged - in consideration of the fact that the BBC is a monopoly institution funded by all the people for the benefit of a few of the people.

Having switched over to digital broadcasting, however, at least the TV Licence payer had the choice, in respect of the River Pageant, to turn to SKY NEWS' excellent coverage of the event from early morning onwards.

"Mark Thompson, you mark my word, is the cat's whiskers and anything and everything BUT running a media corporation.  He was adamant that the BBC coverage was really superb. He's quite happy to receive in excess of £800k but would always draw a comparison with USA media corps.

The reality IS - what does he actually do minute by minute during the day?

Being human he has to visit the lavatory so that time would cost a few thousand pounds each year; washing his hands, combing his hair, blowing his nose and yes drinking his morning coffee.  I bet he's never costed these things out.

His predecessor gained fame when he arrived at the BBC (Greg Dyke) his first words to staff were - "we can cut the crap"  so as I said the lavatory is an important feature."

PLAN your work - WORK your plan - in terms of the BBC, increasingly appears to be based on -

we the planners can continue to live in the manner to which we have become accustomed."

These general considerations are, however, subject to one important clarification.

The monarch is the fount of all honour, and the Queen has always shown a profound understanding of the meaning of public service. None of the honours in her own gift (such as the Order of Merit, or the Royal Victorian Order, which acknowledges personal service to the sovereign) has never, to my knowledge, been contaminated. The degradation has always come through the usual run of honours which are awarded by the monarch on the advice of the prime minister.

All too often these have been very smelly indeed.