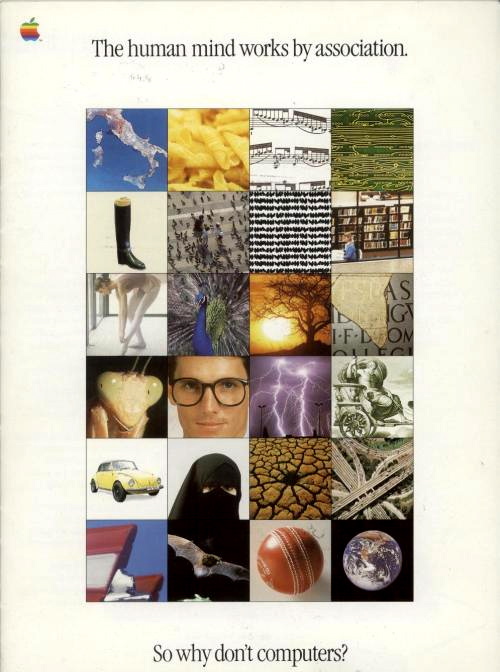 Everything is about relationships. Things are as they

are because of their relationships with everything

else. You can't just look at anything in isolation.

The collage of zaadster faces mapped onto a sphere is symbolic of the global, multi-cultural, multi-ethnic, multi mind-set nature of the 20,000 plus members. Symbolic in the context of Felipe Fernandez-Armesto's - Chapter 2 Give Me a Sign of - IDEAS that changed the world.

A fellow Briton - more famous these-days in the USA than the UK for his TV series entitled Connections - also subscribes, in not dissimilar fashion, to this less and less perspective.

I am, of course, referring to James Burke who has inspired a generation of teachers, students and innovative thinkers. James Burke's work explores the idiosyncratic relationships between technology, science, and social change throughout modern history - and in so doing he has brought the world a unique perspective on how all of history is interrelated & interdependent.

His KnowledgeWeb Project has been established to promote the concepts - which he established through a chain of events - to communicate the relevant connections in history which have changed the world.

I publish here today my own chain of events which have resulted in Brian establishing the zaadz environment.

3 years before the United Nations made its Declaration of Human Rights President Roosevelt's science advisor, Dr. Vannevar Bush - published in the July edition of Atlantic Monthly - his idea of a wondrous machine which he called a memex. A machine which would enable you to search through information with incredible speed. You could pinpoint a thought in a book, leap to a related pointing a newspaper story and go on linking ideas until you built, in essence, a record tracing your own train of thought - one which you could pass along to friends and associates. All of which would be considerably closer to the way the MIND works.

... he further added As Bush described it, the human minds snaps instantly from one related thought to another, following an intricate web of associative trails - synapse to synapse -" .. the speed of the action, the intricacy of the trails, the detail of mental picture is awe inspiring ...." Following Apple's European launch of the Macintosh at Didacta in Basle in 1984 - Vannevar Bush's idea of the memex was taken by Apple and developed into HyperCard. The Apple Macintosh and HyperCard, back-ended by a NEXT server, was then used by Tim Berners Lee to create an electronic work-group environment - global in context - to facilitate the connections between all the scientists and their associates involved in the CERN project.

This electronic work-group environment was established on Tim Berners Lee's invention of hypertext transmission protocol (http), the world wide web (www) and the Mosaic browser with all of its superbly interactive hypertext capability. Mosaic became Netscape and the idea of Netscape was ‘developed' by Bill Gates and Microsoft as Internet Explorer (IE) and subsequently bundled with Microsoft's OS software - and the rest is history as they say - other than the fact that the internet has since evolved from a specialised inter-network of networks of web-browsers and domain controllers to the web-logs (blogs) of the masses and thence through the likes of MySpace and other to zaadz.

and in so doing change the world together -

there is no telling how far we can go !

Michael..very, very interesting and exciting infos in your post! These views provide a unique perspective for historic events and encourages EVERYBODY at ANY TIME to take action, to connect and push and move the edge .

No matter what leverage is at hand, no matter where in the physical coordinates of this planet the body mind is located…

Thanx indeed Brian and his team for doing this work and thus spearheading social networking in its transition to the next level…..

In cogniscence of Tony Buzan's words -

With the advance of computer and electronic technology, the world's human

brains have created the external, electronic Internet. Each human being with a

brain cell, can thus be compared to the multiple linkings that we are now able to

make with each other being a metaphor for the connecting tentacles of each brain cell.

We are, in a very real sense, in the process of creating the first Global Brain

- we could then actually start fulfilling the potential of the Internet

by using it for our ripple effect purpose !

The difference between the cover of the 15th Anniversary Edition of WIE magazine and the cover of Apple's 1987 Hypercard promotional brochure - is that Apple's IKONs are ALL inter-connected. That was of course the point of the exercise - to demonstrate how the MIND “images” on thoughts - inter-connects with others in CONTEXT - and thence hard-wires them in preparation for communication with other
minds - which are continuously going through the same process.
Apple asked - IF - the human mind works by association - WHY don't computers ?
The problem with all the paper-bound WIE ikon/faces is - their lack of interconnectedness - their lack of association - other than, of course, that they have all individually espoused their own views on enlightenment - almost in a printed encyclopedic manner.
Ken Wilber is the only one who has consistently been driven by the thought ( presumably hard wired into his brain by now ) - that EVERBODY has a
piece of THE ABSOLUTE TRUTH.
The challenge as I see it today - IS - in electronically bringing together ALL those IKONs of WIE - all us zaadzsters today and the potential millions of others to follow - secretly asking of themselves - as Andrew Cohen has said - WHY AM I HERE ?
and thence WHO - the hell -AM I ?
As I have said elsewhere - zaadz is potential gate-keeper - to a place where ALL 6 billion of us can potentially *** explore these questions - in open and polite forum - assisted by others according to need.
IF this is not what zaadz is about - PRAY tell me what it is about - whilst considering the fact that it was Siddharata Gautama who said
that - THE BEST PRAYER IS PATIENCE.
Unfortunately change was not changing - in HIS day - at the ever increasing rate that it is today !
*** Although only 50% of the 6 billion have ever used a telephone - we are ever rapidly moving towards a time when - INTEL, PIPEX et al - will be
offering WIRELESS high speed broadband communications access via very,
very low cost equipment & global Wi-MAX.

what better place to start than considering the fact that - Freedom IS to authentically live the life you really want to live. Not try[ing] to be somebody else, [Not]living somebody else's life.

which lead to historic timelines:

The Manhattan Project. Bush suggested prototypical efforts already in 1940.
2 years bef ore it was launched. Warren Bennis rightly described him as
more important in this context than Einstein or Oppenheimer. See his
book “Organizing Genius- The Manhattan Project”.

The history of
human spaceflight. Which starte loooong before the Apollo programe.
Long before von Braun was given greenkight by American government.
Before WW2.

Onc could say at the beginning of 20th century.
History science could illumine the longitudinal manifestation of this
mega projet more.):)

Bearing in MIND, however, that without the influence of HE who was always
playing to the beat of the drum, no combination of the long stream of contributors to the Manhattan Project would have brought the dream to fruition. 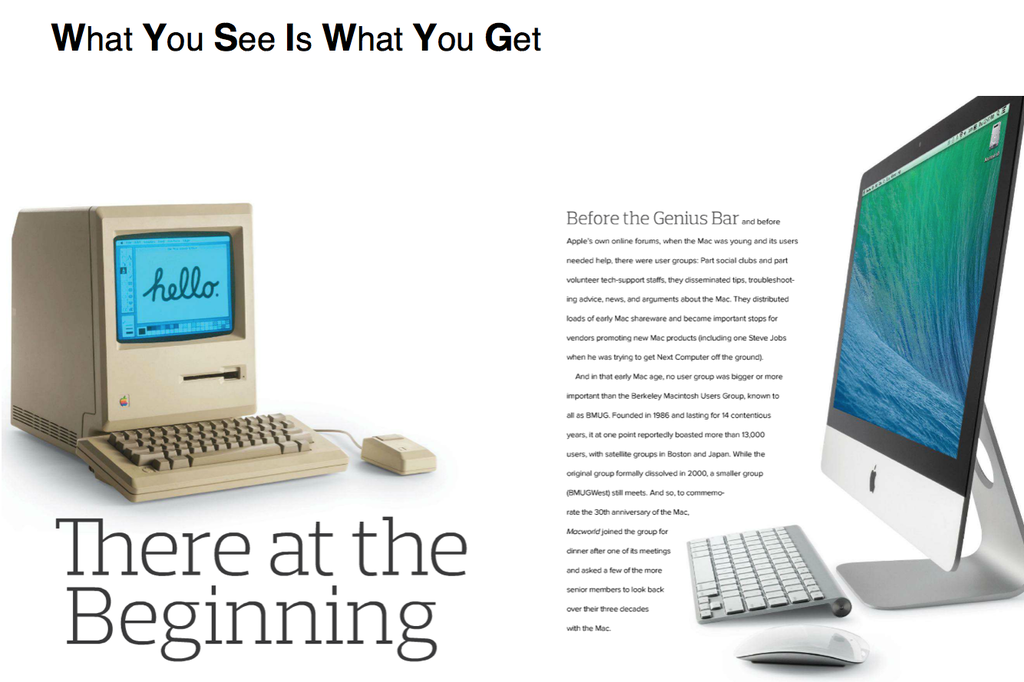 ... and as we celebrate the Apple Macintosh's 30th Birthday - let us never forget that there are

products - which our species NEEDS rather than that which society thinks we want !!! IT] was at Grammar School, that I first read about Dr. Vannevar Bush in an Atlantic Monthly reference to his AS WE MAY THINK IDEAS for the future of Science, during the time that I was studying for my GCE 'A' Levels in Maths Pure and Maths Applied as well as Physics and ART • and I well remember his explanation of the IDEA of a MEMEX, which would take the form of an electronically computerised version of a rolodex device; and so [IT] was that having considered the idea of joining a BOAC pilot training programme, it transpired that I was invited to be one of the first cadets, straight from Grammar School, to be trained as Ministry of Aviation Air Traffic Controllers • and so [IT] was that I began my training, by way of learning the concept of systems  analysis on an IBM 64K Mainframe Computer, that then transmogrified into a familiarisation with Digital Equipment Corporation PD11s and my subsequent IDEA of utilising the AFTN for the purpose of an enhanced radar-handover capability, between Air Traffic Control Centres, during my secondment to Eurocontrol, and subsequent return to the CAA at West Drayton.