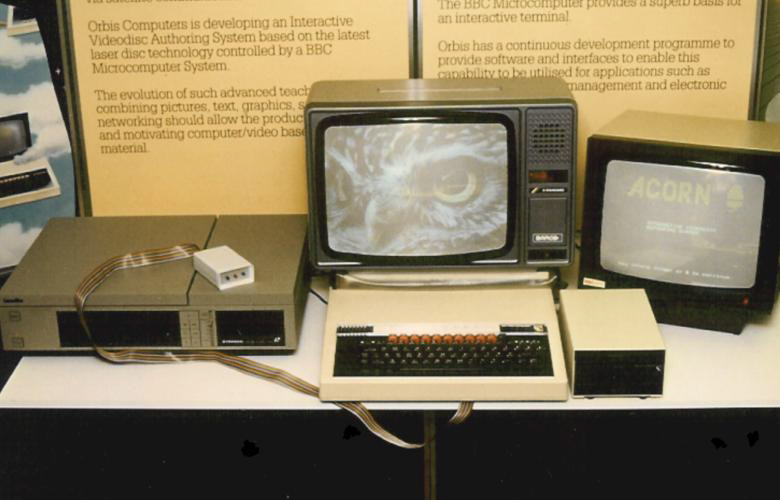 than all the country's coal deposits. He further remarked that in order

in a form which would be of mutual benefit to all potential users.

Various add-ons to the BBC Micro - such as the Teletext Adaptor - were developed during the first year following its launch and at the first annual update of "The BBC Project" - @ The World Trade Centre, Tower of London - the world's first PAL Interactive Video System was demonstrated - based on the Model B version of the BBC Microcomputer - driving a Pioneer Laserdisc player utilising pulse code modulation (PCM) via the User Port and displaying to dual-screens ( PAL /Mode 7 teletext).

and THE tech industry is celebrating the 30th anniversary of the

"The BBC Micro was pretty fundamental to how my life turned out,

in that it was the first computer I ever owned."

"The Beeb introduced a generation of British children to the power

of programming and indeed I want to see this return in a modern form,

part of my computerbasedmath.org agenda."

two veneers of respectability, firstly because it carried the good name of

the BBC and secondly because it was used in schools. There was an

explosion of creativity, most of it coming from self-taught young men like

us working at home. Everything was possible, the potential was infinite.

then selling millions of them, mostly in the UK and the rest of Europe."

the BBC's very own robot as well as create a handy spreadsheet. We helped

the IT industry.  The UK lives or dies by innovation."

"There were many other machines around, all capable of being

programmed, like the Commodore Pet, Sinclair ZX80 and ZX81, Apple 2,

and then in the following years Spectrum, Amstrad CPC, Commodore 64,

even curios like the Oric Atmos, Tatung Einstein, and MSX. But it was the

UK schools. The impact it has had 30 years on is amazing. Just look around

places like Cambridge's Science Park to see the results. Many of these

companies were founded by people whose thorough introduction to

technology came through the BBC Micro. I hope machines like the

Raspberry Pi can go on to do something similar for today's kids!"

"My first computer was a ZX81, but it was my BBC Model B that really got

me into computers. Here was a real computer, satisfyingly chunky and with

a proper keyboard. The BBC Micro was where I learned my trade. To do

anything you had to use the Basic programming language, so you learned

the essentials of programming just to play a game or use a word processor.

It was a very open system with excellent documentation and the

up, with magazines such as Beebug, and user groups across the UK."

"The BBC Micro was hugely influential in my life. Because of its

expandability and capability, it was probably responsible for more small

start-up companies than any other computer of its time. My mum could

at the time, she scraped together the money to buy one for me. I was so

grateful. It wasn't long before I had it wired up to disco lights and then

promptly blew its chips off! She then had to pay the repair bill too

- Jason Fitzpatrick Chairman of The Centre for Computing History

THE SEEDS of the next evolutionary project  ARE [BE]ing SOWN such that ….

You are definitely a smarty. And so glad you continue to want to help the children.! Happy May Day! :)

In 1978 Andy Hopper worked with Hermann Hauser & Chris Curry, founders of Acorn Computers Ltd; Orbis became a division of Acorn in 1979 and continued to work with the Cambridge Ring. While at Acorn, Hopper helped to design some of the chips for the BBC Micro.

When Acorn was acquired by Olivetti in 1985, Hauser became vice-president for research at Olivetti, in which role he co-founded the Olivetti Research Laboratory in 1986 with Hopper; Hopper became its managing director.

In 1985, after leaving Acorn, Hopper co-founded Qudos, a company producing CAD software and doing chip prototyping. He remained a director until 1989.

In 1993, Andy Hopper set up Advanced Telecommunication Modules Ltd [ATM] with Hermann Hauser. This company went public on the NASDAQ as Virata in 1999. The company was acquired by Conexant Systems on 1 March 2004.

The acronym ARM was first used in 1983 and originally stood for   "Acorn RISC Machine". Acorn Computers' first RISC processor was  used in the original Acorn Archimedes and as one of the first RISC processors used in small computers was demonstrated as part of the Acorn Network on the Great British Micro Stand at DIDACTA '84 in Basle, Switzerland, where Apple itself on a much smaller adjacent stand first launched the Apple 128K Mac in Europe.

However, when the company was incorporated in 1990, What 'ARM' then stood for changed to "Advanced RISC Machines, in light of the company's name "Advanced RISC Machines Ltd." - and according to an interview with Steve Furber the name change was also at the behest of     Apple who did not wish to have the name of a former competitor - namely Acorn - in the name of the company. At the time of the IPO in 1998, the company name was changed to "ARM Holdings", often just called ARM like the processors.

Japanese telecommunications company SoftBank Group made an agreed offer for ARM on 18 July 2016, subject to approval by ARM's shareholders, valuing the company at £23.4 billion (US$32 billion).     The transaction was completed on 5 September 2016.

Until this month, Simon Segars had not seen his new boss in person. Arm’s chief executive and Jensen Huang, Nvidia’s billionaire founder, have been in constant contact for months as Huang negotiated a $40bn (£31bn) takeover of the British microchip company. But despite the two living only a short Silicon Valley drive away from one another, this had been done entirely over Zoom.

The two were eventually pushed into proximity out of necessity, taking part in a panel discussion for developers at Arm’s virtual conference last week to answer questions about the deal. “That’s the first time I’ve seen Jensen in the flesh for a very long time,” says Segars. “We didn’t have a face-to-face meeting through the whole process.”

Since Sept 13, when Nvidia announced it had agreed to buy
Arm from the Japanese tech conglomerate SoftBank, there
have been plenty of questions to answer.