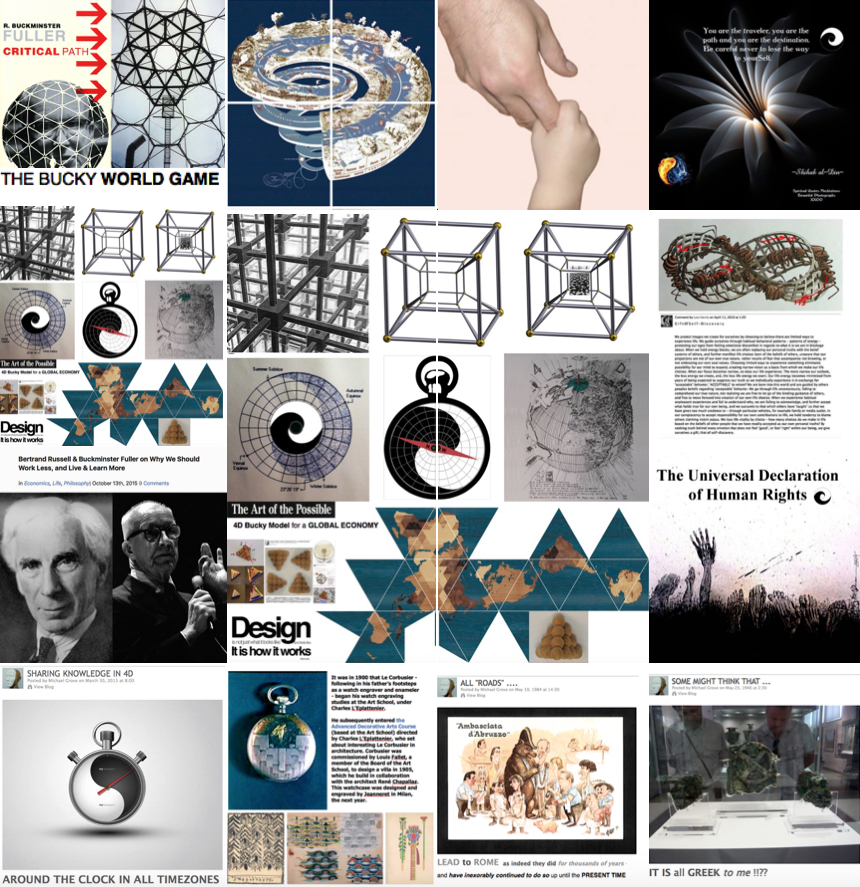 ... of THE NATURAL TIME of "SPACESHIP EARTH"

"software" outlined in my World Game thesis to be the most thorough,

physical and metaphysical success for ALL HUMANITY, all to be realised

No man is an island and turning [y]our vision into a reality has always been dependent on a willingness to search for all the component parts, to communicate and collaborate with the multitude of people destined to provide the component parts and then to "glue" the whole together into a cohesive and meaningful solution. A solution which addresses the very real issues with which we are all faced in our daily lives.

As a result of determination, persistence and perseverance ...

"We should not be trying to make institutions work faster, but to help people to discover imaginative new ways to communicate and work together better. We need to encourage our global society to be able to turn information into knowledge... knowledge into ideas... and ideas into sharing wealth"

THE real key to understanding, all things, IS within ourselves.

"Human rights and the principles of humanity - those values we share

across faiths and culture - together represent the highest common

vision of humanity. They form a global ethic, already agreed by all

states and their peoples throughout the world. Such a global ethic

provides a common framework to inspire and shape concerted action." "Kronos (or cronos in the English spelling, from which we take our word
chronology) is sequential time. Kronos is the time of clocks and calendars;
it can be quantified and measured. Kronos is linear, moving inexorably
out of the determinate past toward the determined future, and has no
freedom. Kairos is numinous time. Kairos is a time of festivals and
fantasies; [IT] cannot be controlled or possessed. Kairos is circular,
dancing back and forth, here and there, without beginning or ending,
and knows no boundaries."
Lonnie Kliever


My own understanding of the distinction between Kronos and Kairos IS very much related to my long-since espoused perspective of Destiny BEING that which one discovers ... IF every opportunity, with which you are faced, is responsibly acted upon in all humility and that Fate IS what you are faced with if you don't.

The Phoenicians were the very first to circumnavigate the earth, by way of both the northern and southern hemisphere's, and were no doubt well aware of the juxtaposition of the changes in wind direction due to the coriolis effect - an in depth understanding of which, may have led the Greek designer and manufacturer of the Antikythera mechanism, to include the capability of switching the operation of the mechanism to operate in opposite directions. A functionality which alas we can never prove, because the mechanism itself was totally corroded together as one solid block. Greek astronomers pioneered the work of calculating the sides and angles of triangles and Islamic scholars used trigonometry to determine the direction to Mecca. Muslims like to pray facing Mecca. Tradition requires that the dead be buried facing Mecca and that Muslim butchers face Mecca when killing animals for meat. It was Al-Khwarizmi who wrote about the practical use of decimals and also clarified and popularised a method for solving certain mathematical problems. He explained the method in his work The Book of Restoring and Balancing.

The term al-jabr in its Arabic title, Kitab al-jabr wa’l-muqabala, is the source of the English word algebra. Algebra, says science writer Ehsan Masood, is considered “the single most important mathematical tool ever devised, and one that underpins every facet of science.”

The "ROAD" or way of Tao IS the way of NATURE, but it is equally, most certainly the case that everything which the Roman Empire established, was done so, to protect the control of those in power, over the so called, citizens of ROME as well as their cohorts and their slaves throughout the Empire; in total denial of our species connessione with nature, in accordance with the linear time of the Gregorian calendar as opposed to the previously well established dependence on the cycles and phases of the moon and all of their commensurate consequences of consequences

Centuries later, Western mathematicians, including Galileo and Fibonacci, held al-Khwarizmi in high esteem because of his clear explanations regarding the use of equations. Al-Khwarizmi’s descriptions paved the way for further studies in algebra, arithmetic, and trigonometry. The latter enabled Middle Eastern scholars to calculate values for angles and sides of triangles and to advance studies in astronomy. In time, al-Khwarizmi’s works were translated into Latin.

The Italian mathematician Fibonacci (c. 1170-1250), also known as Leonardo of Pisa, is generally credited with popularizing Hindu-Arabic numerals in the West. He learned about them during his travels in the Mediterranean world and thereafter wrote his Book of Calculation.
... to be continued in this vain from Le Corbusier's fob-watch of 1910 onwards - when the British Navy was bigger than every other navy on earth put together, in order that the trade routes of the British Empire were protected, as those that plied them sailed in accordance with the navigational aides of the admiralty, in TIME with Greenwich Meantime - into the time of the Great War and the demise of the British Empire, as the USA gradually assumed the role of the world's policeman; and thence the League of Nations, the Great Depression, WWII and the advent of the United Nations as well as that of which Bucky has here, already spoken so far.

ALL of which has now [BE]come more readily accessible to the entirety of humanKIND, as a result of Tim Berners Lee's free gift to humanity, in the form of the World Wide Web which is synchronised moment by moment by the atomic clock in GIOVE B.