Exxon: The Road Not Taken 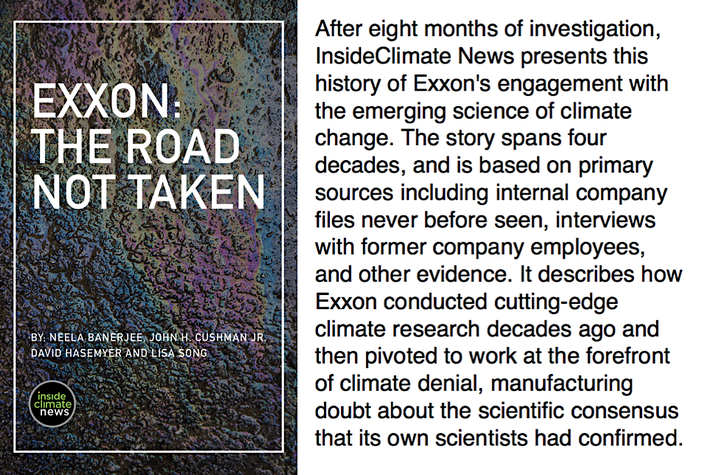 This book is extremely important. Exxon's role in climate denial and the irrevocable harm that they have knowingly been a leading contributor to must become common knowledge. As legal action is brought to this company public awareness and pressure will play a key role in what could be a pivotal moment in the history of the fossil fuel industry and a possible watershed moment for climate justice.

As Simon Kerr has so lucidly made comment at AMAZON

"This collection of essays makes easy but critical reading for those wishing to understand the resistance to and methods used to deny the validity of climate science. The authors are fair minded enough to acknowledge that Exxon made some significant contributions to climate science and as a company, were seeking to deal with the problem of increased carbon emissions. But, as the title suggests, the corporate leadership the company demonstrated in the late 1970s ran up against the challenge of falling profits, and so the company did not take the high road. For this they need to be publicly exposed, as this book does. An interesting dimension for me is in the divergent cultures within Exxon at the time. Major companies are rarely ideological monoliths; they are usually collections of competing agendas. However, it is clear that the environmental responsibility message did not filter through to the next generation of corporate executives, much to the shame of Exxon. It could have taken the road to corporate leadership but failed. It is not just the company who is worse off for this, it is the colossal task facing the world community to stem the tide of climate damaging emissions that Exxon, and companies like them, are largely responsible for.
The message of the book: Exxon knew that its emissions would raise the temperature of the planet, and they knew that this could cause enormous challenges, if not make the world uninhabitable for the types of societies we have built. But they took the cheap road and failed in moral leadership. Shame on them. Final comment on the book; because it is a collection of essays, the narrative does not flow as well as it could. Therefore as a literary piece it is not going to win any prizes. But as an expose, it is very good." One of the UK’s biggest philanthropic investors has quietly sold its stakes in large oil and mining companies such BP and Shell.

The Wellcome Trust is one of the biggest funders of scientific research in the UK with a £38bn investment fund. For almost a decade it has resisted pressure from organisations, including the Guardian, who argued that profiting from fossil fuel companies was incompatible with the Trust’s objective of improving public health and wellbeing.

Wellcome Trust staff were told on Tuesday that the organisation has stopped investing in large oil and mining companies. However, in a sign of the complicated politics around such a decision, the organisation said it would not actively seek press coverage of the decision.