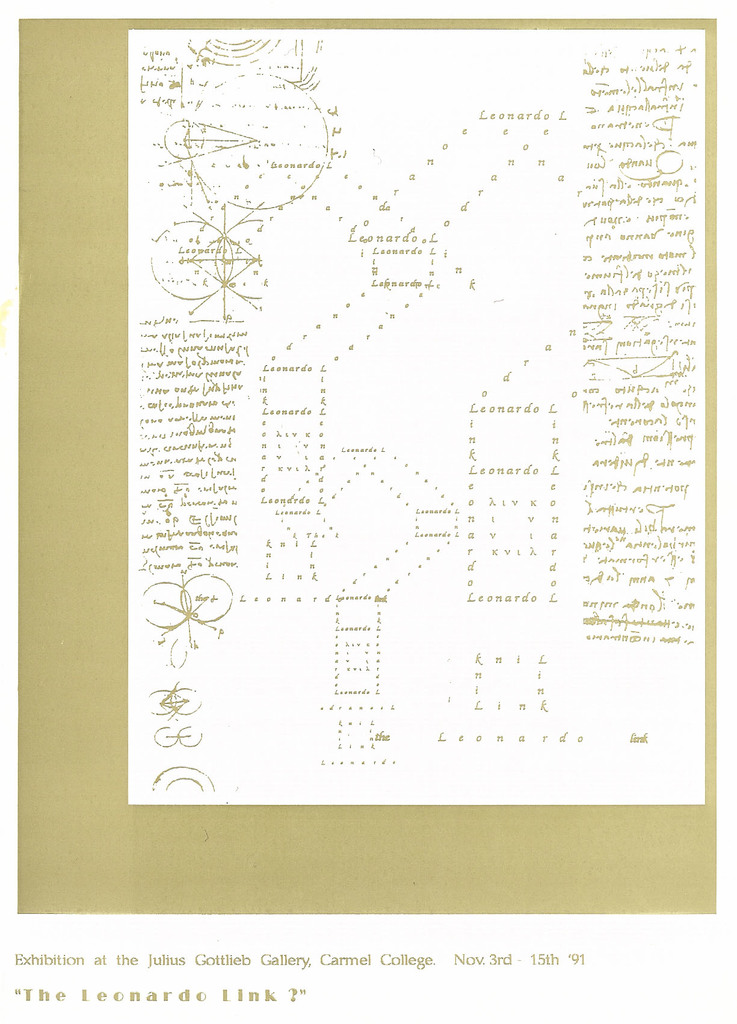 It is our contention that the antipathy between word-based and visuo/spatial modes of thought has had damaging effects on the development and use of visual cognitive skills which are an essential element in the human brain's capacity to change response patterns - to create.

The Power Of Dyslexia about Famous Dyslexics
This capacity is no mere decorative " extra " it is as important a survival factor as language.

Our powers of " vision " are too often unrecognised, diregarded, thrown away. Here in this exhibition is a chance to glimpse the other side of the coin - the visually - dominant dyslexic mind at work, unfettered by the superfluous constraint of words.
Such a MIND - at its greatest -
is a Leonardo or an Einstein.

While it is obviously not possible to state categorically at this date that Leonardo was ( or was not ) dyslexic - there are highly significant traits in his work (e.g. the mirror writing) which suggest to the trained eye • and from my own experience having been born left-handed and encouraged by my teaching nuns to utilise my predisposition to micro-writing with my left hand • that he was. 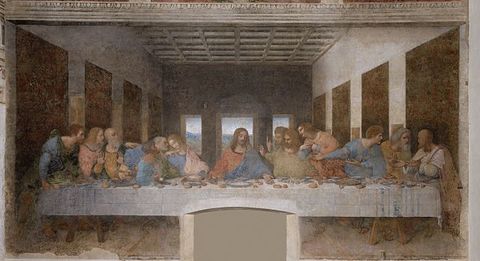 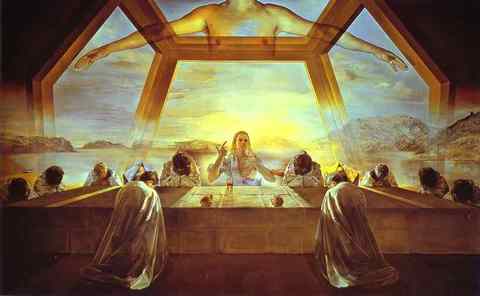 The "visuo/spatial" dominance
of Leonardo da Vinci (as opposed to a "word-based/sequential" mode of thought) is, in any case, surely undeniable.
.
He himself says that the use of drawing gives " knowledge which is impossible for ancient or modern writers (to convey ) without any infinitely tedious example and confused prolixity of writing"
Leonardo's use of perspective and golden proportions is further "mirrored" in Dali's version of The Last Supper
Ludovico Maria Sforza - also known as Ludovico il Moro was Duke of Milan from 1489 until his death. A member of the Sforza family, he was the fourth son of Francesco Sforza. He was famed as a patron of Leonardo da Vinci and other artists, and presided over the final and most productive stage of the Milanese Renaissance.
He is probably best known as the man who commissioned the
The Last Supper.
The "visuo/spatial" dominance is equally evident, and naturally more accessibly documented in the case of Einstein. We have, for example, reports from his tutors and his own comments on his academic education.
Most telling perhaps, is his famous remark -

"If I can't picture it, I can't understand it" 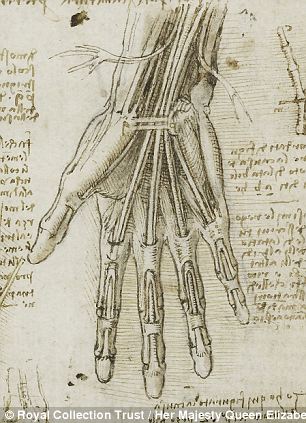 Leonardo was right all along, new medical scans show

He has long been praised as one of the finest artists of the Renaissance, working far ahead of his time and producing some of the world’s most recognisable works.

But Leonardo da Vinci has finally received the credit he deserves for his “startling” medical accuracy hundreds of years in advance of his peers, as scientists match his anatomical drawings with modern day MRI scans ...

Leonardo da Vinci famously tried to discover the secret of bird flight -
he built elaborate flying machines and was convinced that, suitably equipped with wings, members of our own species could take to the air. 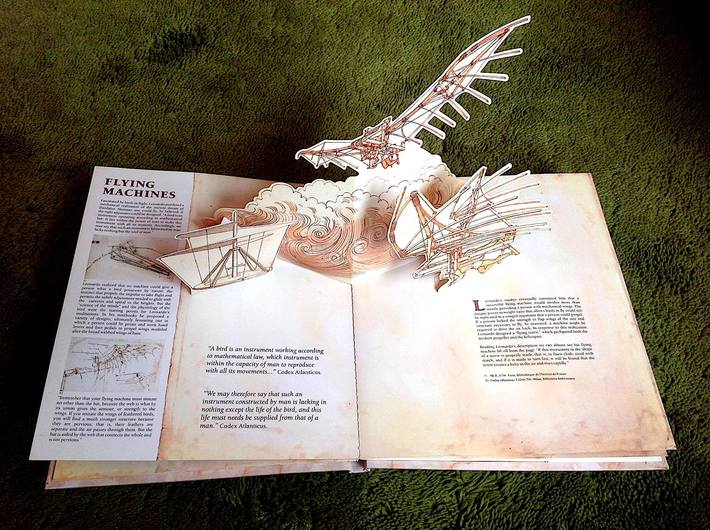 ”The great mystery of FLIGHT. Would that it gave the chance to escape this

mortal coil and all its travails.  IF NOT for me then perhaps for others.”

A recent article in the New York Times Sunday Review explains the latest findings on dyslexia which are leading to a new way of looking at the condition: not just as an impediment, but as an advantage, especially in certain artistic and scientific fields - 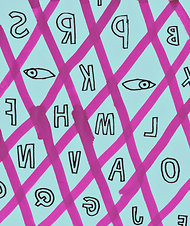 Dyslexia is a complex disorder, and there is much that is still not understood about it. But a series of ingenious experiments have shown that many people with dyslexia possess distinctive perceptual abilities. For example, scientists have produced a growing body of evidence that people with the condition have sharper peripheral vision than others. Gadi Geiger and Jerome Lettvin, cognitive scientists at the Massachusetts Institute of Technology, used a mechanical shutter, called a tachistoscope, to briefly flash a row of letters extending from the center of a subject’s field of vision out to its perimeter. Typical readers identified the letters in the middle of the row with greater accuracy. Those with dyslexia triumphed, however, when asked to identify letters located in the row’s outer reaches.

Intriguing evidence that those with dyslexia process information from the visual periphery more quickly also comes from the study of “impossible figures,” like those sketched by the artist M. C. Escher. A focus on just one element of his complicated drawings can lead the viewer to believe that the picture represents a plausible physical arrangement. 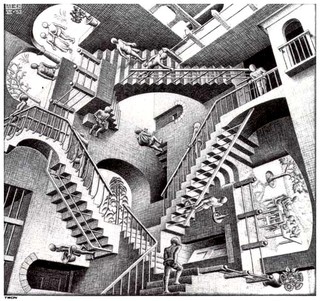 A more capacious view that takes in the entire scene at once, however, reveals that Escher’s staircases really lead nowhere, that the water in his fountains is flowing up rather than down — that they are, in a word, impossible. Dr. Catya von Károlyi, an associate professor of psychology at the University of Wisconsin, Eau Claire, found that people with dyslexia identified simplified Escher-like pictures as impossible or possible in an average of 2.26 seconds; typical viewers tend to take a third longer. “The compelling implication of this finding,”

wrote Dr. Von Károlyi and her co-authors in the journal Brain and Language, “is that dyslexia should not be characterized only by deficit, but also by talent.”

From "the seed" of the BBC Computer Literacy Project -

to the Interactive Multimedia Presentation of Picasso's Guernica -

BRAVO and ALL hail to those who have obviously worked

with passion to bring "this particular" event to fruition.

when he was working for Ludovico Maria Sforza, the swarthy ruler of

Milan. One day Leonardo sat down and inscribed the top of a sheet

“Book entitled On the Human Figure”. As a new exhibition of his

anatomical studies at the Queen’s Gallery at the Palace of

Holyroodhouse in Edinburgh suggests, though, it would be another

two decades before he really hit his stride.

It is only a year, of course, since Leonardo da Vinci: Anatomist,

a magnificent exhibition at the Queen’s Gallery at Buckingham Palace

that showcased the full breadth of around 200 sheets of

anatomical studies by Leonardo in the Royal Collection.

feels less significant. While it sets Anatomical Manuscript A in

context by providing a handful of representative sheets from earlier

and later in Leonardo’s career, including one of the famous 1489

drawings of a sectioned skull, it does not offer a comprehensive

overview of his activities as an anatomist.

The exhumation of three bodies from a Florentine crypt may have

brought Italian researchers a step closer to confirming the identity of

the woman believed to be the subject of Leonardo da Vinci's

-which refers to Lisa Gherardini, the second wife of a Florentine silk

Yet another step in the journey to to truly understand the LIFE and WORKS of Leonardo. 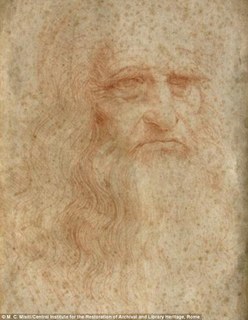 ONE of Leonardo da Vinci's

masterpieces, drawn in the

a self-portrait, is in extremely

poor condition and continues to

The artwork, drawn in red chalk,

has been exposed to humidity

over the centuries and has

yellowed, but thanks to

is new hope for halting its

Scientists have developed a new approach to

identify the culprit of the yellowing without

interfering with the original drawing and the

knowledge gleaned could be used to preserve

and save the precious self- portrait. 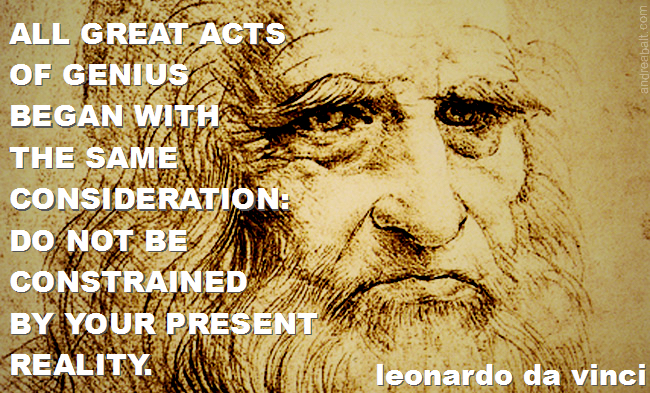 What does it mean to be a genius? Is genius born or made

aliveness? How do you develop your multiple talents, loves

and abilities and how can you evolve in every aspect that

amounts to the complex equation of You? How do you yourself ever practice brilliancy? well in the context of my long-standing appreciation of the mirror-writing capabilities of Leonardo da Vinci • I well remember hand drawing a copy of his