The advent of BRAVE NEW WORLDS ... 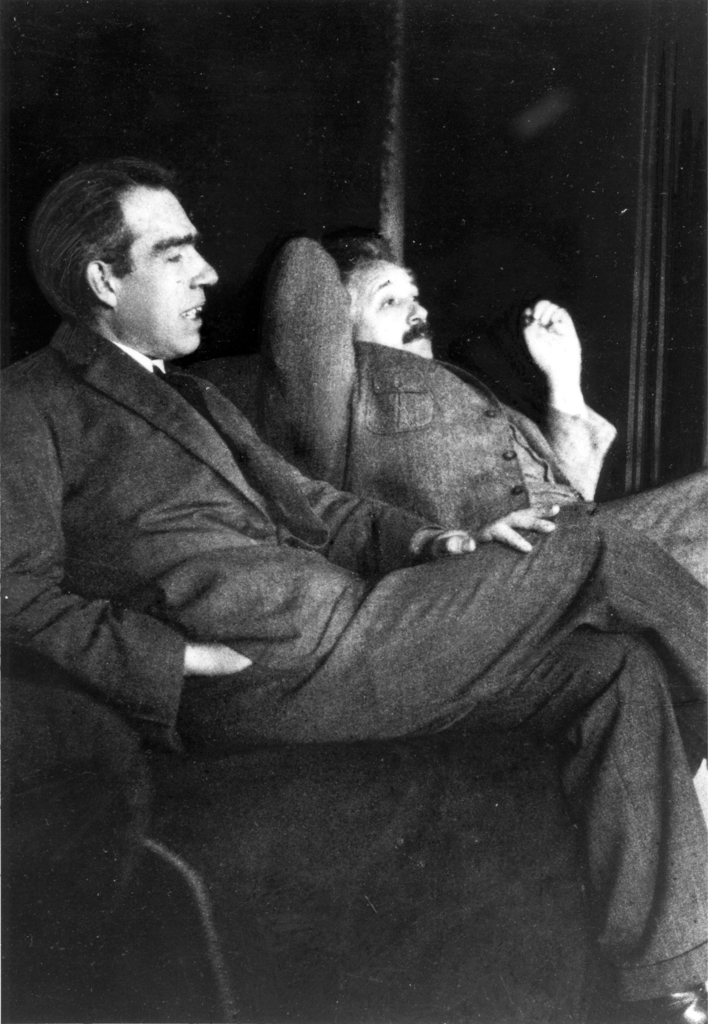 as HOMO SAPIENS lets the genie out of the bottle ...

Brave New World
Having studied physics, maths pure and applied, at A Level as well as art at grammar school, I had already been introduced by way of geography & geology to the significance of the importance of the Anthropocene as the geologic time, used to describe the most recent period in Earth's history when human activity started to have a significant impact on the planet's climate and ecosystems & the very concept of the Noosphere, prior to my initial flying training with BOAC and subsequent acceptance by the Ministry of Aviation and the MOD for training as an Air Traffic Upper Airspace Area Radar Controller, prior to my secondment to Eurocontrol in Bussels, Luxembourg and the Maastricht Upper Airspace Centre in Beek NL.

the young Aldous Huxley prepares to publish his - Brave New World - set in London in 2540 or 632 After FORD - which will anticipate the developments in reproductive technology, biological engineering and sleep-learning that will combine to change society -

an age of understanding - of quantum mechanics, genetics, volcanoes, earthquakes & climate change beckons - and in so doing focuses our MINDS on
new beginnings for the future of the KOSMOS
Genetics will eventually reach outward to the COSMOS
and inward to the KOSMOS as Bryan Appleyard has
said - in his own book entitled ...
Brave New Worlds - Genetics and the Human Experience

- genetics is not just another technological development like the advent of antibiotics, computers or space shuttles. It is not simply another phase in the spectacular progress of science marked by such theories as Darwinian evolution, quantum mechanics or relativity. Nor is it merely a big IDEA like capitalism, communism, democracy or fascism that changes people's views of the world. Rather, it is ALL of these things - a historically unique combination of philosophy, science & technology that confronts humanity with the most fundemental questions, our answers to which will determine the human future. In short, it is wholly unrealistic for science to claim for itself a kind of untouchable innocence about its impact on the world.

- there can be no turning back to the days when scientists were left totally on their own to chart their own course. The public will immerse itself in the affairs of science. Whether it does so constructively will depend on the willingness of scientists to welcome public participation ...

The answer to the question WHICH is RIGHT ? - is NOT one or the other but something of BOTH
and as Niels Bohr said to Einstein -

"You are not thinking ...
You are merely being logical."

“One effect of the so-called free way of thinking is that it could eventually force anyone who wants to survive on the basis of mental activity (other than cloud tending) to enter into some sort of legal or political fortress - or become  a pet of a wealthy patron - in order to be protected from the rapacious hive mind.

What free really means is that artists, musicians, writers, and filmmakers will have to cloak themselves within stodgy institutions.

We forget what a wonder, what a breath of fresh air it has been to have creative people make their way in the world of commerce instead of patronage. Patrons gave us Bach and Michelangelo, but it’s unlikely patrons would have given us Vladimir Nabokov, the Beatles, or Stanley Kubrick” -  Jaron Lanier - “YOU are NOT a GADGET”... and they most certainly wouldn’t have given us the so-called “bastard”  Leonardo da Vinci

Title picture of Niels Bohr and Albert Einstein by Paul Ehrenfest - as featured by the Da Vinci Institute
.

By 14 December 1900, Max Planck was already able to present a theoretical derivation of his black-body radiation law, but this required him to use ideas from statistical mechanics, as introduced by Boltzmann. By that TIME he had held a strong aversion to any statistical interpretation of the second law of thermodynamics which he regarded as of an axiomatic nature -

The central assumption behind his derivation was the supposition that the electromagnetic energy could be emitted only in quantized form, in other words, the energy could only be a multiple of an elementary unit E = hν, where h is Planck's constant, also known as Planck's action quantum (introduced already in 1899), and ν is the frequency of the radiation.

At first Planck considered that the quantisation was only as “a purely formal assumption … actually I did not think much about it…” - nowadays this assumption, incompatible with classical physics - is regarded as the birth of quantum physics and the greatest intellectual accomplishment of Planck's career. It was in recognition of this accomplishment that Planck was awarded the Nobel prize for physics in 1918.

The discovery of Planck's constant enabled him to define a new universal set of physical units - such as the Planck length and the Planck mass - all based on fundamental physical constants.

In 1905 the three epochal papers of the hitherto completely unknown Albert Einstein were published in the journal Annalen der Physik - Planck was among the few who immediately recognized the significance of the special theory of relativity. Thanks to his influence this theory was soon widely accepted in Germany.

However, Einstein's hypothesis of light quanta (photons), based on Philipp Lenard's 1902 discovery of the photoelectric effect, was initially rejected by Planck - he was unwilling to discard completely Maxwell's theory of electrodynamics. “The theory of light would be thrown back not by decades, but by centuries, into the age when Christian Huygens dared to fight against the mighty emission theory of Isaac Newton …”

As I just posted on Siona's blog siona shows her cards, I seem less and less able to take in information, or to 'think' like I used to.

Clearly you have an astonishing mind, but even without actually really knowing what you are talking about, I feel you, the words, and it all resonates
very deeply over here.

heh heh, just read again the bit about the compulsion to know.

Ah yes, indeed. All that knowing in the world…

And I wonder if there is another kind of knowing… my favourite one, and a
topic I often touch upon: Listening. Deep listening. Whole body / mind
/ spirit listening… to the hum of the universe, of all that is, of you
& me, of the One, of now.

To the hum of the universe …

these were unique day in science history. We have at London Integral Circle an ongoing, fiery and passionate European discussion since 2002 about
the confluence and specifics of knowledge, intuition, science and
wisdom. There is right now no consensus.

And you might remember young Ken Wilbers edition of “Quantum Questions” with mystical writings of Einstein, De Broglie, Schrödinger, Heisenberg, Bohr, PLanck, Pauli, et al. Discussions about paradigm change, concepts, models, theory and perspectives surround the whole integral discussions since the beginning. Deepening considerably the new agy confsuions of Marylin
Fergusons “Aquarain Conspiracy”. However not the least finished for the
next decade.And even since Teilhard de Chardin, Gebser, Aurobindo, Habermas etc. Not to mention early beginnings 200 years ago.

The missing link in all of this are power-knowledge equations. Wilber adresses it in his excerpts of Volume 2 of Kosmos Trilogy. And in “Integral Spirituality”. Simply put the two lower quadrants (adressed in SDi too) have most profund centers of gravity which pull EVERYTHING into certain habits and grooves and patterns.

And especially the German history with shipwreck of WW 2 shows how cognitievly devloped nations can ruin themselves and other nations.

So brave new worlds I do not see.

Instead fresh perspectives and new blueprints, roadmaps, devlopment maps and
pioneering efforts to deal with the monstrous dimensions of global reality.

With all tensions, friction, heat and diversity in the frozy edge as much as in al tiersiof reality.

More of a Renaissance and an evolutionary jump time, as Jean Houston says. 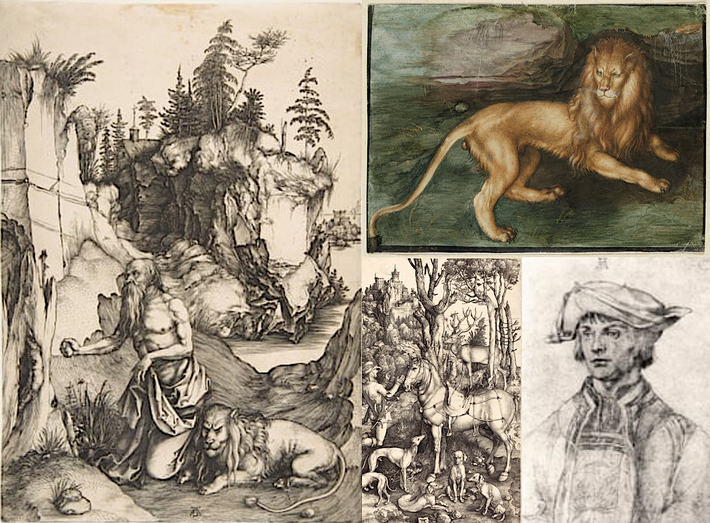 To quote Laura Cumming in her Observer Art & Design Article I also believe that there was no better proponent of A BRAVE NEW WORLD "than Albrecht Dürer (1471-1528) who was the most intrepid traveller in the HISTORY of ART from his home city of Nuremberg he crossed the Alps more than once in trecherous conditions, staying in icy mountain shelters. The ship on which he sailed for six days to see a beached whale in Zeeland was almost lost in a winter storm. He lived in Venice in times of cholera, and possibly picked up malaria on a trip to the Low Countries where he was astounded by Aztec gold in Brussels and the Van Eyck altarpiece in Ghent. And all of these journeys were undertaken during outbreaks of the plague" and so you can only just imagine how disappointed I was also, that as far as the National Gallery's Exhibition in, London was concerned "the strange creatures, saints and distant landscapes depicted by the great German artist were thrown together with the work of lesser painters in a show that veers between wondrous and inexplicable."

What an absolute shame therefore that although "His travel journals are full of astonishing sights – soaring comets, conjoined twins, the bones of a giant (which in fact belonged to a whale). He sees, and draws, girls in Dutch costume, Turkish merchants, African women. Boats lie at low tide in the port of Antwerp, fantastical castles rise on pinnacles above the river Rhine. There is a sheet of magnificent sketches of dozing lionesses, a blue baboon and even an alarmingly sharp-eared lynx in the new zoos of the Low Countries, alas only the last appears in this long-anticipated exhibition devoted to Dürer’s travels. To say that the experience in the Sainsbury Wing is baffling would be an understatement. Veering between wondrous, meandering and occasionally inexplicable, this is a show without a map." 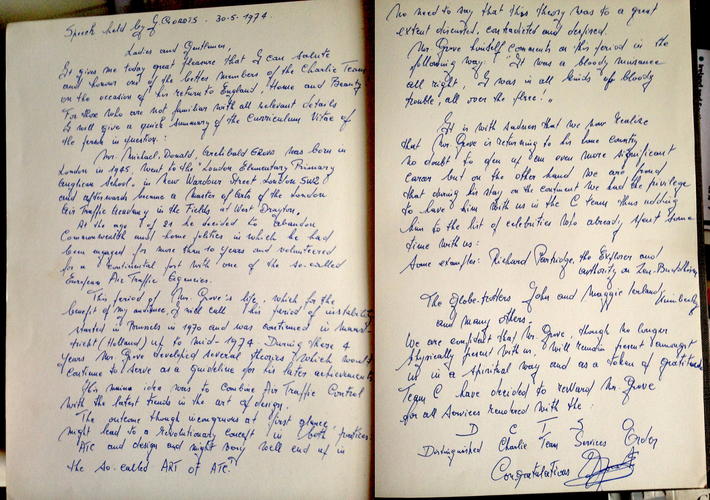 Although Eurocontrol is not an agency of the European Union, the EU has delegated parts of its Single European Sky regulations to Eurocontrol, making it the central organisation for coordination and planning of air traffic control for all of Europe. Not withstanding however • in the context of Air Traffic Control for the Netherlands [LVNL], having become the world’s first air traffic control organisation to communicate its safety performance and potentially serious incidents in its operations and the Dutch Safety Board’s exemplary investigation into the causes of the... on 17 July 2014 in the eastern part of Ukraine • WHAT I FIND extremely disturbing is the fact that on the day of that flight at least 162 other commercial flights were happily being instructed by Air Traffic Control, at the behest of the Senior Management, to take this very same route by member states of EUROCONTROL !!!???
The EU itself is a signatory of Eurocontrol and all EU member states are presently also members of Eurocontrol. The organisation works with national authorities, air navigation service providers, civil and military airspace users, airports, and other organisations. Its activities involve all gate-to-gate air navigation service operations: strategic and tactical flow management, controller training, regional control of airspace, safety-proofed technologies and procedures, and collection of air navigation charges.