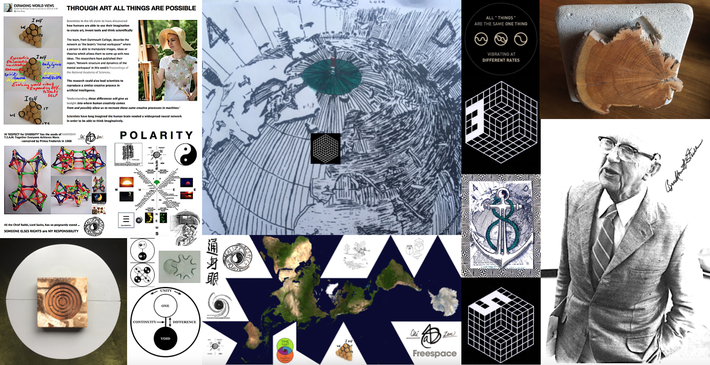 Fuller's concern with fine-tuning communication, developing and using words that are consistent with scientific reality, is one facet of the role of language with respect to synergetics. Another deals with the difficulty of describing visual and structural patterns. Anyone who has tried to describe an object over the telephone is well aware of the problems involved; there seems to be a shortage of functional words. The temptation to use your hands is irresistible, despite the futility. This scarcity of linguistic aids is especially severe for non-cubical structures, which characterise most of nature. That a language of pattern and structure is not widely accessible indicates that humanity's understanding of such phenomena is similarly underdeveloped. We thus join forces with Fuller in an investigation of this neglected field, and in so doing we become more and more aware of the rich complexity of the order inherent in space. Along the way, we are introduced to some new terminology that includes the lesser-known language of geometry as well as some words invented by Fuller. More information—useful only, it is clear, if the terminology is both precise and consistent—leads to better comprehension, which in turn leads to the ability to experiment knowledgeably. Experiment fosters both greater understanding and invention—in short, progress. In conclusion, Fuller's insistence on employing accurate vocabulary is part of an important aspect of human communication.

We join him as pioneers in the science of spatial complexity, the terminology of which is for the most part unfamiliar. The systematic study of structural phenomena is an important and badly neglected aspect of human experience. "Comprehension of conceptual mathematics and the return to

modelability are among the most critical factors governing

honey-seeking preoccupation into the realistic prospect of

Synergetics: Explorations in the Geometry of Thinking

Synergetics is a product of Fuller's passionate concern with models. Concerned that society's ignorance of science is seriously destructive, he devoted years of thought to ways of alleviating this ignorance. In the 20th century, we suddenly find ourselves confronted with an "invisible" atomic reality in which the average person understands very little about how things work. Although confronted daily with "incredible technology", which to Fuller includes the natural phenomena of Universe as well as the ever-expanding inventory of human invention, the vast majority assume such phenomena to be out of their reach. Fuller attributes this widespread discomfort to both the "invisibility" of science and the devastatingly complicated mathematics without which, scientists claim, their findings cannot be described. The dangerous chasm between scientists and lay people, with the truth guarded by an elite few and the rest resigned to ignorance, thus seems inevitable.

The origin of this troubled state of affairs? An incorrect mathematical system! Long ago human beings surveyed this environment and, seeing a never-ending flat Earth, decided upon cubes and orthogonal planes as the appropriate measuring system. Today, says Fuller, we're still stuck with that uninformed early guess, and as a result, nature's behavior has seemed irrational, perverse, and difficult to describe because we're using the wrong kind of yardstick. With accurate models, he claims, this gap can be closed. The purpose of synergetics is to make the invisible events and transformations of Universe visible, through tangible models that elucidate the principles behind our energy-event Universe. Human beings will thereby be able to "coordinate their senses" with a new understanding of reality.

Synergetics is full of tantalizing models; the difficulty comes in assigning them to aspects of physical reality. However, a number of notable examples, in which a newly discovered scientific phenomenon is described by one of Fuller's previously developed models, suggest that there may be many more such successes to come. The immediate goal therefore is to unravel and study the geometric system [IT]self.