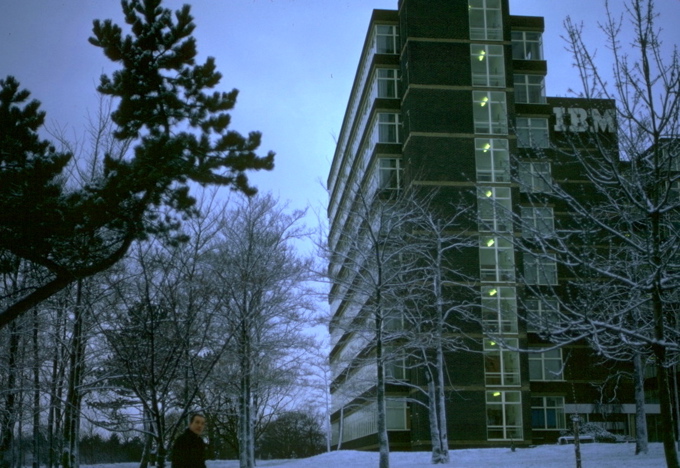 IT WAS during my early preparations of a timeline of stories, for my

AlphaINDEX of Stories website, back at the end of 2011, that I set up an

IBM link to a press release that I had just been reading, which made me

UK Ministry of Aviation to Eurocontrol in Bruxelles, prior to the Maastricht

Centre in Beek NL being 'opened for business'; with its first IBM commercial

mainframe derivative of that which sent the men to the moon.

graphics processor, which we pre-ordered and took delivery of in late

revolutionise the mainframe/server/front-end interface, @zaadz, on

release of Apple's first iPhone. Smiles also because of my bemusement

that an IBM senior engineer's early long-term prediction, back in the 1960's -

fail catastrophically and there would be no-one of those, left alive, that

could fix them - was now being linked to the future of Windows !!!???

It was on my return from secondment to Eurocontrol, to what had now

been transformed into the Civil Aviation Authority, that I first purchased

and read Pirsig's masterpiece and subsequently got hooked on ALL things

of Harding and Graves - which brings me to his statement ...

Damn it all, a person has the right to be who HE [IS]

His ideas can best be crystalised by this following statement -
“ Briefly, what I am proposing is that the psychology of the mature
human being is an unfolding, emergent, oscillating, spiraling process, marked by progressive subordination of older, lower-order behavior systems to newer, higher-order systems as man’s existential problems change.”

THEREIN lies THE mind-set solution to the globalisation dilemma,

in the context of Frederick Bostiak's statement that -

together in society - they create for themselves, in the course of time,

... because of the fact that the peoples of our species are at last

awakening to the fact that, globalisation today, has transmogrified into

a conglomerate of self-serving, elitist, LET THEM EAT CAKE oligarchies -

from the USA to the EU, from CHINA to INDIA and from RUSSIA to ISRAEL

and the Middle East etc. etc.