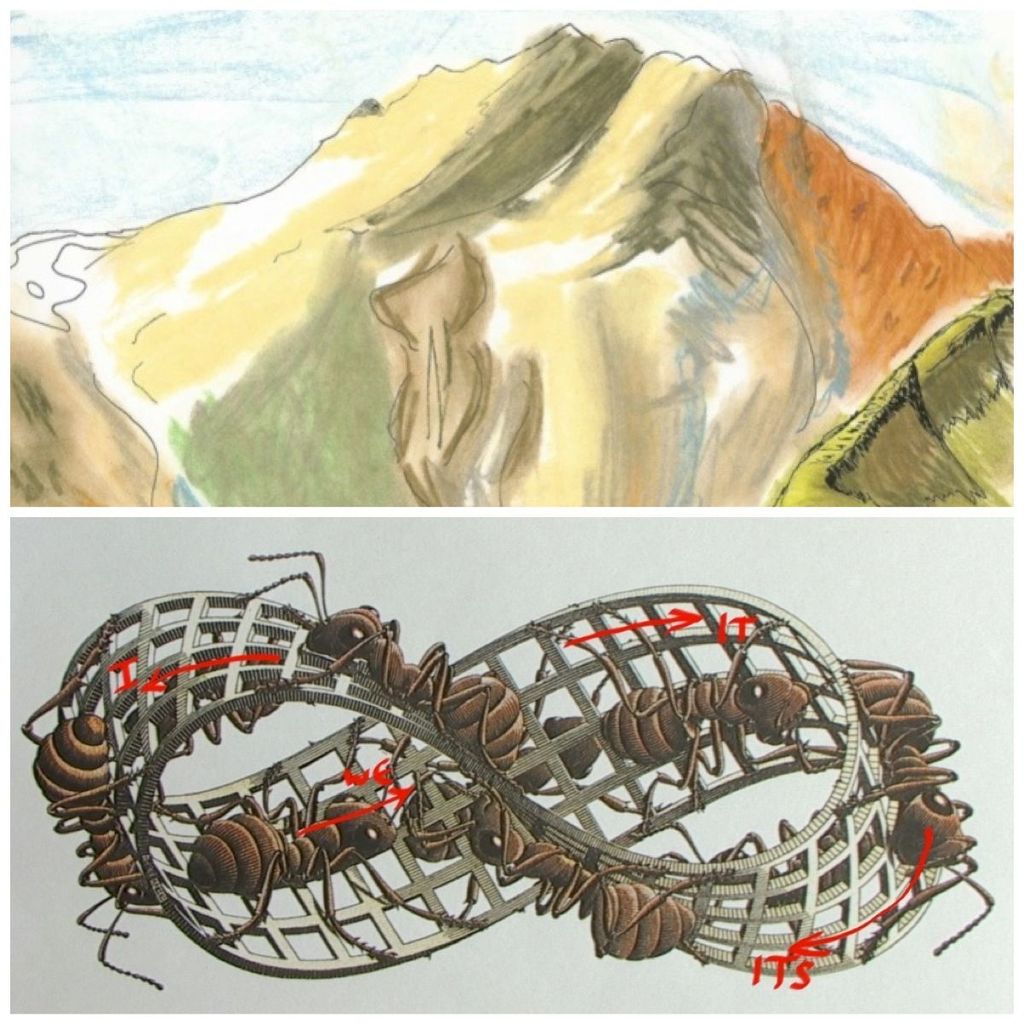 THAT - a play on the Dr. Martin Luther King, Jr. statement -

“I Have Seen The Mountaintop: A Vision Of The Possible.”

Does NOT in fact apply to the "Magic Mountain" which is Davos,

the annual event known to the elite as the World Economic Forum.

as a visionary - and went on to say -

"What is a visionary? Visionaries are those rare and inspired individuals who see great promise and imminent potentials for human consciousness and culture that most of us haven’t even begun to imagine yet. They see far beyond the present to a future that has yet to be created. For them, in a sense, that future already exists because their awareness is illuminated by inspiring and compelling images of the possible. Unless we, like Dr. King and other great spiritually awakened beings, invoke that same capacity to see and intuit beyond where we already have come, it is unlikely that our lives will be expressions of anything other than the status quo."

ago. As Jeremy Warner has stated in his Telegraph article -

For most of the time, Davos is just another Alpine resort, albeit one which enjoys a little literary fame as the backdrop to Thomas Mann’s metaphysical novel, The Magic Mountain. But for five days at the end of January it is transformed into the very epicentre of global power and wealth, a conference which in terms of its concentration of business and political leaders is unsurpassed by anything else in the international calendar. For the world’s elite, it is not just an opportunity for networking and deal making, it is also a time for reflection, and there is certainly a lot of that to be done after a year which saw public trust in the established centres of power plumb new depths.

LOSS of trust is, of course, a big subject, covering multiple different areas of business, financial and political practice. It is also not exactly a new phenomenon. Certainly, it has been a regular at these meetings for as long as I’ve been attending them, and little good has this rumination done either. Each year, the trust thing only seems to get worse.

"When plunder becomes a way of life for a group of men living together in society - they create for themselves, in the course of time, a legal system that authorises it and a moral code that glorifies it "

also create a financial system that profits from it ...

IS there ANY WONDER as Philip Aldrick reported before this years Davos event, that -

The crisis in the eurozone, the US “fiscal cliff”, Japan’s latest public spending stimulus programme, weak growth and rocketing national debts will be used as evidence that the path to stable long-term prosperity is not the one that has been trodden by the West over the past quarter of a century.

Developing nations will put the case against the Western model as 1,500 politicians, business leaders, economists, environmentalists, philanthropists and actors debate potential solutions to the world’s economic woes at the Swiss ski resort.

The theme of this year’s Davos meeting is “resilient dynamism”, a philosophy that the WEF’s founder Klaus Schwab described as moving on from agonising about current problems to looking “at the future in a much more positive way”.

He has called for a “spirit of global citizenship” and co-operation to restore dwindling public faith in politics and business.

“There is a fatigue now in globalism, even a backlash,” he said.

“The future of the world economy is

based on restoring trust in our leaders.”

As Fraser Nelson, Editor of 'The Spectator’ has recently stated -

"Perhaps the best part of David Cameron’s Europe speech was Tony Blair’s baffled reaction to it a few hours later. WHY, Blair asked, would any prime minister be so vulgar as to propose a referendum and put the public into the equation? The way to work in Brussels is to have a quiet word with fellow members of the elite and cut a deal. By holding a popular vote, he continued, Cameron was in effect putting a gun to his own head and declaring: “If you don’t do what I want, I’ll blow my brains out.” To Blair, the British public are there to be invoked in speeches. To actually consult them is a form of suicide.

Absence, it seems, has not made the former prime minister’s heart grow any fonder of Britain or its voters. When seeking election in 2005, Blair did find it necessary to offer a referendum – as Cameron has – but he quietly tore that plan up, like a good European. Now his successor, Ed Miliband, promises to tear up this referendum pledge if elected in 2015.

“Most EU countries have tacitly agreed to build Europe above the heads of the people,” it wrote. “The European project is simply too important for democratic participation. And then along comes this Cameron!”

At the same time, faith in elites has collapsed. A YouGov poll last November showed how police officers, politicians, union leaders and even school teachers are trusted far less than they were a decade ago. The old political proposition – vote for me, and I will fix things for you – holds less weight than ever.

Barack Obama campaigned on precisely the opposite pledge -

If Miliband wants to run for office in 2015 saying “trust me”, then good luck to him.

He will be seeking votes in a country where politicians are considered about as reliable as cheap burgers. Cameron will run for office saying: “I trust you, and here is a referendum on Europe to prove it.” In this way, the EU vote is not just a tool of foreign policy, or party management. It can now be used as a symbol, showing that Conservatives tend to place their faith in the people, while Labour places its faith in the state.

Cameron's call for a European Union of Peoples, rather than a Union of Governments, chimes perfectly with what he has been saying at home. And it was backed up by a hard pledge that left Labour floundering."

The annual "Trust Barometer" survey published by Edelman, a public-relations firm, reports widespread scepticism about the ethics practised by political and business leaders. Why the big gap between trust in leaders and the institutions they lead? Edelman suggests that leaders have been slow to adapt to the requirements of a world in which top down is no longer the best way to lead, or in many cases even a viable one. Suffice it to say, there is nothing more top down than trying to lead the world from high up a mountain.

Even Swiss economist Mr Schwab, speaking on the eve of the elite annual gathering in the Swiss mountain resort of Davos, called for business and government leaders to focus on "cautious realism" and a recovery of public trust to avoid another major financial crisis.

OR as David Harvey concludes in this RSAnimation ...

"I'm certainly well taken care of in terms of food and clothes," Bill Gates said. "Money has no utility to me beyond a certain point. Its utility is entirely in building an organisation and getting the resources out to the poorest in the world."

The JP Morgan boss - Mr Dimon - led a powerful panel at Davos in an attack on global regulators, pouring scorn on their criticism of bank complexity. “Businesses can be opaque. They are complex. You don’t know how jet engines work either,” he said.

He argued that his bank continued to lend to Spain and Italy knowing that “something might go wrong”, because “we are not a fair-weather friend... What shall we say? That it’s too much risk? We provide a service to you, that’s what happens.”

Mr Dimon argued that regulators are out of their depth and have failed to fix the system despite having spent five years trying. “I think a lot of regulators are also overwhelmed,” he said. “They’re overwhelmed with rules and regulations.”

The reality of the global situation with which the nations of our species - individually and collectively - have been faced - for the last 40 years or more - has been one of continuously deteriorating trust on behalf of the peoples of those nations in THEY who have chosen not to discuss the real issues and consequences of that fateful few days other than insisting on maintaining THEIR own self serving status quo as the basis of "the solution" to "the problem".

The scandal has drawn in the ECB’s president Mario Draghi, who was head of the Bank of Italy and in charge of oversight when regulators failed to pick up the warning signs at Monte dei Paschi (MPS), the world’s oldest bank dating back to 1472.

Daily newspaper Corriere Della Sera has obtained documents showing that the Italian central bank knew about trouble in 2010 and sent two missions to go through the books, but then played down the affair.

of the Bank of Italy itself ...

and as for Switzerland's OLDEST private BANK !!!

"When plunder becomes a way of life for a group of men living together in society - they create for themselves, in the course of time, a legal system that authorises it and a moral code that glorifies it -

BUT there IS enough money for luxury ministerial limousines - chauffeurs to drive them 100 yards to a meeting - and hours spent waiting to make the same 100 yard return journey - instead of just 3 minutes each way to walk the same journey.

so much for 'we're all in it together' !