THE SPACE in between the brackets of [in4D]™ provides a surface, which IS focused on the point of nOw that IS [≡] PAST • PRESENT • FUTURE as ONE; on which you can project IDEAS, and from which, you can transmit ...

HOW to SHARE IDEAS, for the mutual benefit of ALL the passengers of Spaceship Earth - human and otherwise. IT is the concept of Facebook BEING the VERY SURFACE onto which IDEAS can be cooperatively, collectively and collaboratively projected, that Eric and I discussed, towards the end of our meeting at his offices in London • ALL of which equates to the TIME[less] GENIUS of Eric’s UNIVERSAL surface perspective of ALL things 5th dimensional, projected [in4D]™ ≡ MIND, BODY and ACTION • BRAVO and ALL HAIL to his own LIBRARY of IDEAS which he shared selflessly with the passengers of Spaceship Earth.

Synergetics is the system of holistic thinking which R. Buckminster Fuller introduced and began to formulate. Synergetics is multi-faceted: it involves geometric modeling, exploring inter-relationships in the facts of experience and the process of thinking. Synergetics endeavors to identify and understand the methods that NATURE actually uses in coordinating Universe (both physically and metaphysically). Synergetics provides a method and a philosophy for problem-solving and design and therefore has applications in all areas of human endeavour.

pages of his book THE MILK IS WHITE • NO THING MATTERS

(In these three lines lies the answer to any question about life.)

[IT] IS indefatigably the TIME [in4D]™ when ALL of human[KIND] should
step up to the plate, as passengers of Spaceship Earth, and work as a
T.E.A.M. for the creation of THE FREESPACE to action the the concept of
"Through art all things are possible"
. 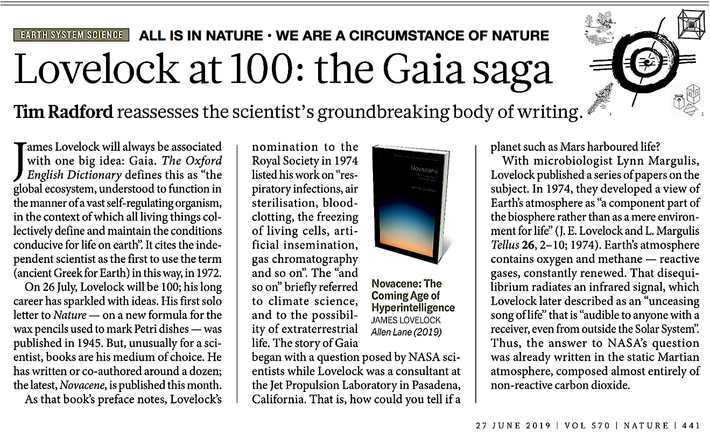 That was the beginning of a sustained and developing argument, in

the face of sometimes dismissive criticism, that recast Earth as, in effect,

a superorganism. Lovelock’s Gaia theory states that, for much of the past

3.8 billion years, a holistic feed- back system has played out in the biosphere,

with life forms regulating temperature and proportions of gases in the

To continue from whence I started AI / cybernetics has been a very touchy subject over the years and I have become a great fan of Jaron Lanier over the years, but as you Gregory have no doubt well understood, our own understanding and commitment to the very concept of GAIA as proposed by Margullis & Lovelock remains at the heart of that which [WE] both ascribe to, most particularly in the context of PAST • PRESENT • FUTURE • AS ONE • NOW • in which I referred to Lovelock’s 100th Birthday and and his very adamant proposal that Earth • GAIA will [BE] in[DEED] saved by artificial intelligence, bearing in mind that he has always been an ardent supporter of nature’s own nuclear fusion as the ART of the Possible Solution to the dangers of climate change, which have [NOW] well and truly ARRIVED so to speak or NOT !!!???