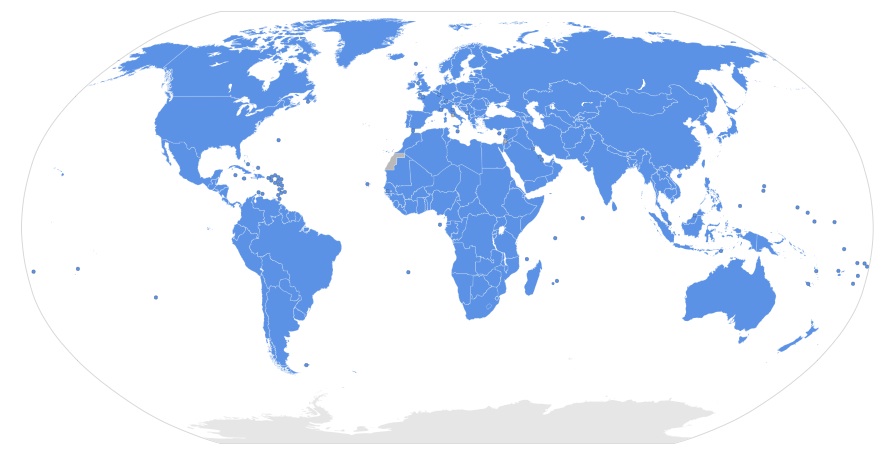 NATION of families - FAMILY of NATIONS ...

IS how I've always perceived the collective of HOMO SAPIENS SAPIENS

on earth. Instead what do we find, but a world full of peoples controlled

by a predominantly patriarchal mind-set full of its own importance, doing

the wrong things for the wrong reasons.

Baha'u'llah said ... THE EARTH is but ONE country and mankind its citizens.

that ... No minority has a right to block a majority from conducting

the legal business of the organisation .... but equally ... No majority has

Beautiful World - In The Beginning

Today's editorial in  The Business entitled
- At last, the family takes centre stage in politics - struck me as somewhat ironic in respect to my CRISIS, CRISIS, CRISIS zblog posted elsewhere - particularly in the context of the increasingly Big Brother style of politics - according to Karl Marx - which we are being subjected to in our still class-ridden United Kingdom - and of course the politics of envy  which is now back on the agenda - so to speak.

The Business editorial concluded that - Anyone who doubts that changing the tax and benefits system can tackle family breakdown should look across the Atlantic. While it is well known that the Clinton-Gingrich welfare reforms of 1996 ended the automatic entitlement to benefits and slashed welfare rolls from 12.2m to 4.5m, few in Britain realise that it was also designed to strengthen the family and deter teenage pregnancies.

The shift in the British debate is a positive first step; now our political elite needs to follow words with deeds and move to reverse the catastrophe that is Britain’s family policy.

I can only imagine the free-enterprise version of a similar inter-action of perspectives & opinions being banded around in the USA at present - in the context of choosing Presidential candidates - but what must be said - other than the fact that America & the world needs a visionary in the White House - IS what wherever us zaadzsters are located - AS INDIVIDUALS - none of us should divert our FOCUS from the BIG PICTURE which will inevitably require a NEW collective model  of LOVE & COMPASSION - appropriate to ALL 6.5 billion on earth.


When the many are reduced to ONE - to what is the ONE reduced ?

OR logically an INDIVIDUAL of course - and as Albert Einstein so rightly stated - Only the individual can think, and thereby create new values for society — nay, even set up new moral standards to which the life of the community conforms. Without creative, independently thinking and judging personalities the upward development of society is as unthinkable as the development of the individual personality without the nourishing soil of the community. The health of society thus depends quite as much on the independence of the individuals composing it as on their close political cohesion.

ONLY in UNICITY can WE COMPLY with the LAWS of NATURE

and re-establish a SUSTAINABLE NATURAL ORDER of THINGS

By the end of the Clinton administration child poverty was at its lowest level since 1979 and the poverty rate for children of single mothers
its lowest in US history. This was thanks to the incomes of poor
mother-led households increasing by more than a quarter. The employment
rates of even the least-qualified single mothers rose by 40%, while
teenage pregnancies are down by 30%. The growth in out-of-wedlock
births has also slowed radically, confirming that changing economic
incentives can have an important effect on family structures.

Alan Johnson - Education Secretart - argued on Tuesday that the “debate is about ensuring politicians don’t go back to moralising about the nature
of the relationship and concentrate on helping the child.” We have no
desire to moralise but politicians should be practical – and all the
evidence shows that if we are to concentrate on helping the child the
state should encourage marriage. This does not mean, though, that
society should stop offering its love and support to single parents,
many of whom achieve heroic successes with their children despite all
the obstacles.

But the simple truth, buttressed by dozens of studies and oodles of hard data, is that in the majority of cases, marriage works better than any other child-raising system – and
the poorer you are, the truer that is. Britain urgently needs a
US-style welfare revolution, which puts at its heart the restoration of
the traditional family and which ends the current system’s undermining
of marriage.

When government oversight is the issue, we're all in this together

In the context of human society the individual is the irreducible unit of evolution. Family, tribe, race, etc arise to enhance and amplify the
evolutionary input from individual consciousness. However, the group or
collective always tend to fear and want to control the individual.
Of course the group – of whatever size – is not a real entity (in the same way that an individual is) but is used as a mechanism by power and
security hungry individuals to control and manage the threat posed by
the input of creative individual to the evolutionary process.
The Aquarian Age, being under energies favouring group life, will present a real danger of suppressing individual capacity to function as the
evolutionary unit. There is a paradox here because the individuals
evolutionary input can only be validated in collaboration with other
individuals, i.e. in team formation. The resolution of this paradox
lies in satisfying the need for a genuinely shared vision as the
driving force behind the evolutionary teams' effort.
What is missing from the “New Age” movement is the science of group work*. A science that has been mastered to a considerable extent by the business
world but all too often driven by unworthy, self-seeking, narrow,
materialistic goals.
Beware of a business team who sees doing good as a business opportunity.
*Such spiritual science of team work has been outlined in the books of Alice Bailey in describing the “seed group” project and the work of the New
Group of World Servers.

Please help restart a stalled evolutionary team effort. A vision has been conceived and has been born into ZaadzLand but it needs real-world nourishment now. Keith was the “midwife” of the vision and I was supposed to lead and keep in
order a “nourishing team of evolutionaries” to nurture it into an
effective change agent, but am failing in this task.

In order that the 5th DIMENSION be embodied on our 3rd DIMENSIONAL PLANET an evolution of both individual and collective consciousness will have needed to have taken place as a result of a switch of mindset.

and here we are 3 years later & they still haven't been able to formulate such a generic Keep It Simple Sustainable model. BE beware, indeed, of a business team who sees doing good as a business opportunity.

BE beware also, of female politicians providing opinions of what supposedly comprises NEW SOLUTIONS, to problems which require androgenous attention.

I have been developing such a model for over 50 years and having completed my mission, so to speak, and am presently in preparation of a
Business of Change model which will address what is missing from the
“New Age” movement. As soon as I am able I will share my thoughts on
the subject with the evolutionary team effort such that the TEAM might become an effective change agent.

You seem to have found me after reading my comment above.

I am looking forward to hearing how the evolutionary team effort can be enriched by your model.

’Imagine they are waiting for a politics with the maturity to
balance idealism and realism, to distinguish between what can and
cannot be compromised, to admit the possibility that the other side
might have a point. They don’t always understand the arguments between
right and left, conservative and liberal, but they recognize the
difference between dogma and common-sense, responsibility and
irresponsibility, between those things that last and those that are
fleeting.”

IT was Tolstoy who said … ALL HAPPY families are happy in the same way, but every UNHAPPY family is unhappy in its own way … and boy, as a Russian, HOW WELL did he understand the psyche of his Nation of families.

In complete contrast & juxtoposition, as Albert has quite rightly confirmed elsewhere, the Chinese Nation of families, as A HAPPY FAMILY, need to be left to their own devices to influence the ULTIMATE way in which the FAMILY of NATIONS evolves.

… ALWAYS bearing in mind, however, the prophetic words of Joseph Tainter
in his 1988 epic - The Collapse of Complex Societies

“A nation today can no longer unilaterally collapse, for if any national government disintegrates, its population and territory will be absorbed
by some other [or bailed out by international agencies]… . Collapse, if and when it comes again, will this time be GLOBAL. No longer can any individual nation collapse.”