WALKING THROUGH THE HISTORY of the BRITISH ISLES 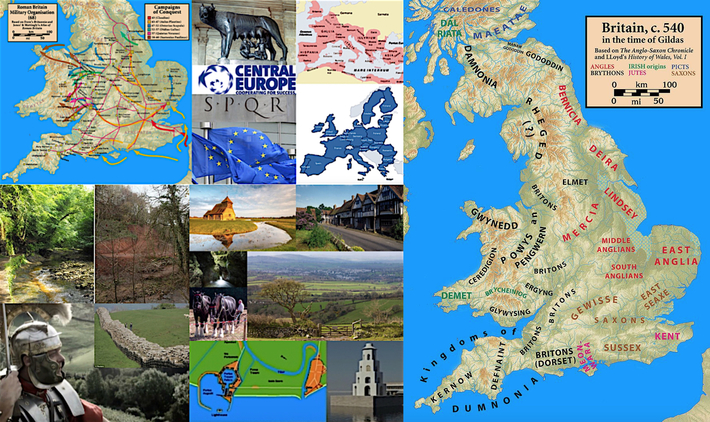 ... IT WAS no coincidence, by the TIME that the Romans began to leave

Britain in 409 A.D. after 366 years of occupation, that the very farthest

northwestern extent of their Empire, reached all the way to Hadrian's Wall

in Cumbria; and that almost a century before the Romans had arrived to

legions and after winning several battles against the Celtic tribes (Britons)

in the south-east of England, he was finally forced to return to France.

Scotland and that which constitutes England and Wales today, each with

different types of mineral make-up, were brought together as one; and

Isles of Orkney several millennia before - in search of Caledonia's valuable

natural resources, like lead, silver and gold; as well as tin from England

and Wales; and a pleasantly climatic place to live, settling down to a

The Romans, of course, wanted access to ALL of those precious metals

and it was they who first called our land ‘Britannia’, which quite simply

meant 'land of tin'. They weren't however, just a destructive force - they

built new forts, new settlements as well as roads and they spread their

THE CURIOUS CASE of BEING BRITISH [IT] was a family ramble through fields during

lockdown last year that led to an “oh wow moment”:

the discovery of a Roman villa complex containing

thought to be one of the most remarkable and

significant finds of its kind in Britain.

Never forgetting the influence that was manifested

by the legacy which the Romans left the isles of

so, I would suggest than the land of ROME which

has now been subsumed by the so-called idl of A wealthy Roman trading town, whose inhabitants adorned themselves with jewellery and ate from fine pottery, has been discovered half a metre below the surface of a remote field in Northamptonshire.

A 10-metre-wide Roman road, domestic and industrial buildings, more than 300 coins and at least four wells have been unearthed at the site, where 80 archaeologists have been working for the past 12 months.

The field, on the Northamptonshire-Oxfordshire border, lies on the route of the HS2 rail network under construction between London and Birmingham. It is one of more than 100 archaeological sites that have been examined along the route since 2018, and among the most significant findings to date. “This is certainly one of the most impressive sites [we have] discovered while working on the HS2 scheme,” said James West, of Mola Headland Infrastructure, which has managed the excavation. The presence of an archaeological site in the area has been known since the 18th century, but the findings during the dig surpassed experts’ expectations.

“This is certainly one of the most impressive sites [we have] discovered while working on the HS2 scheme,” said West. “Uncovering such a well-preserved and large Roman road, as well as so many high-quality finds, has been extraordinary and tells us so much about the people who lived here. The site really does have the potential to transform our understanding of the Roman landscape in the region and beyond.”

An iron age village, formed of more than 30 roundhouses, stood on the site at the time of the Roman invasion in 43BC. During the period of the Roman occupation, which lasted until AD410, the settlement expanded and became more prosperous.

New stone buildings were constructed in distinct domestic, agricultural and industrial areas of the settlement. In the latter, archaeologists have uncovered evidence of workshops and kilns, where activities such as metalwork, bread-making and pottery took place.

The main road – which West described as “a Roman dual carriageway” – indicates that the town was a trading hub, with carts coming and going to load and unload goods. Most Roman roads were 4-5 metres wide, “so this is really impressive”. The nearby River Cherwell was another trading route to and from the settlement.