See No EVIL, Hear No EVIL, Speak No EVIL 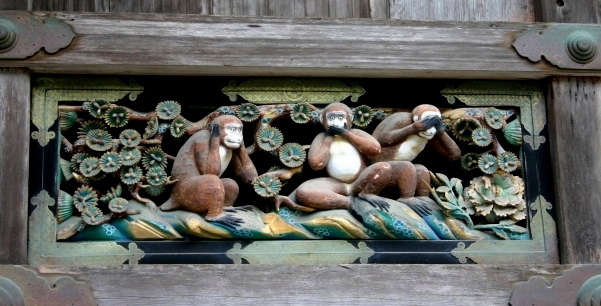 EVIL is the power of knowledge without humility

The power of knowledge with humility is LOVE

WHERE ? - however - is there ANY indication of humility in the quadripolar camps - which Mark Leonard describes in his latest book ( referenced in my comment below ) - which have all been established from their own perspective of - the power of knowledge.

NOT have "TIME" to indulge these kind of quadripolar concepts.

As Deng Ming-Dao has said -

Ancient societies were tribal - The group did the thinking.

Current society is splintered - The individual must be complex.

People from old traditions were often less complicated because they had the advantage of a complete culture that did the thinking for them.

Everyone had a role that fit with the whole. Individuals could concentrate on fulfilling their place, confident that other needs would be met by the collective.

The specialisation of modern times calls for individual roles that do not necessarily form a whole. We often lose sight even of what that whole is.

We have commentators, we have critics, but we do not have leaders. We celebrate egalitarianism and consensus, but it is phoney - a chaos of voices rather than a democracy - a populace of individuals pursuing their own ends rather than a collective.

The burden thus falls on the individual to fulfil a tremendous range of functions. We have to make more choices, be more informed, act in a wide variety of areas. We cannot simply concentrate on doing our part, because now our part is to compete with everyone else.

Spirituality is more difficult today. In the past, you could become a spiritual aspirant and the people would support you - a holy person was just as much a part of the collective as a farmer. Now, to be a holy aspirant you have to look for your own job and find new ways through a society that barely recognizes the spiritual.

some godliness, spirituality or whatever back into the equation - synthesize and

conscious capitalism for the mutual benefit of ALL

NEVER doubt that a small group of thoughtful committed citizens can change the world.

Indeed, it's the ONLY thing that ever has.

Mark Leonard was director of foreign policy at the Centre for European Reform until November 2006 and in early 2007 will set up and direct a new pan-European initiative of the Soros Foundations Network, to promote the EU as a model for an open society.

His recent book - ” Divided World : The Struggle for Primacy in 2020 ” - describes a world in 2020 which - will NOT see a new world order, but a competition between four ideas of how the world should be run - an American world striving for a balance of power that favours democracy - a ‘Eurosphere’ whose support for democracy is coupled with a belief in international institutions - an ‘axis of sovereignty’ led by China and Russia that sees multilateral institutions as protection from western interference - and a Middle Eastern ‘faith zone’, defined neither by democracy nor the rule of law. This essay sketches the outlines of the ‘quadripolar world’ that is awaiting us.

Can the swing voter in this global game of chess - however - utilising its position as what will undoubtedly be the world's largest democracy in 2020 - yet again sow the seed of the final global solution.

Sow the seeds…reap the benefits for humanity.