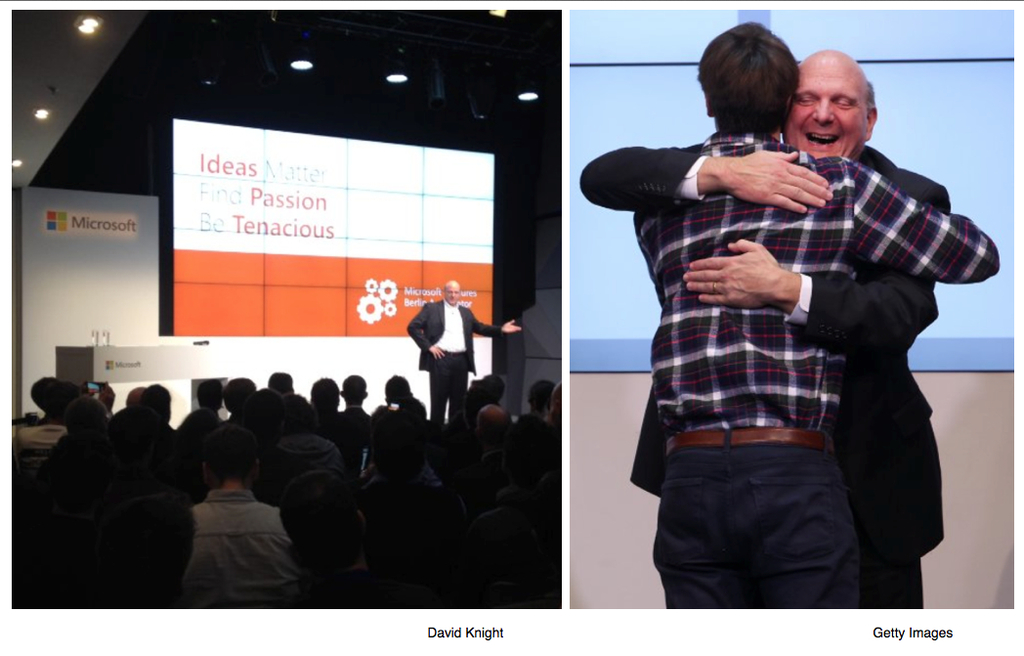 Always the showman, Ballmer - who will step down next year - put on a

good performance to the gathered crowd of media, investors, corporate

ventures and entrepreneurs. After inviting on stage the founders of the

Ballmer made sure to give each one a big hug.

At a time when Bill Gates, one of the world's richest men, says he has no

use of money ... "The crowded room inside the corner building on Berlin's

grand Unter den Linden boulevard was packed with representatives from

corporate types, they had all gathered for the official opening of the

building, Microsoft's new presence in the German capital. The American

tech giant was quick to seize on the hype surrounding start-ups in Berlin,

with the announcement of the participants in its first accelerator program

the center of attention at the event. The big guns had been brought along,

perceived by the latest tech-savvy generation - following its 1990s heyday.

To that end, the company is following in the footsteps of its rivals: Google

also has its Berlin office on Unter den Linden, almost across the street,

eye of the Brandenburg Gate and Twitter is just around the corner.

Berlin even has its very own Apple Store."

In order that the CHANGEL Project facilitates a better understanding between

men and women, adults and children, rich and poor, west and east, Microsoft

and Apple, no better example can be followed than that which has been

provided by Bill Gates and hismanagement policies for Microsoft ...

Bill Gates has said "when I was 19, I caught sight of the future and

based my career on what I saw. I turned out to have been right".

His mother said to his wife-to-be on the eve of their wedding ...

"for those that have everything, much IS expected".