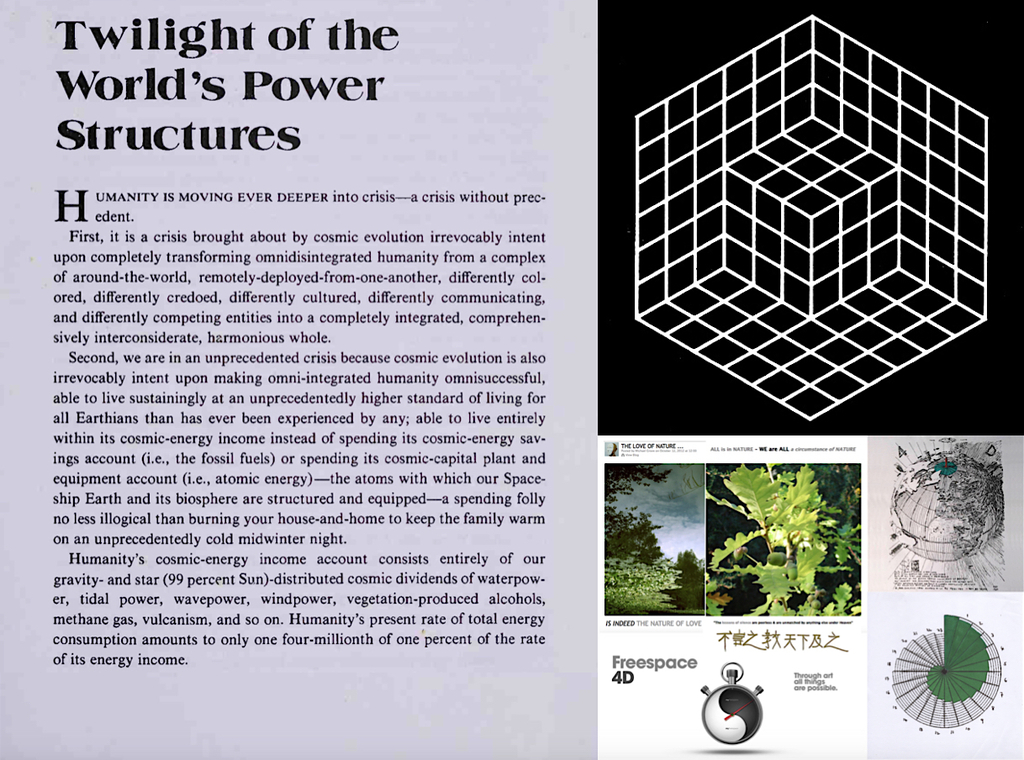 ...of A CONSCIENTIOUS CAPITALISM for, by and of,

THE COLLECTIVE MINDSET of ALL THE PEOPLES of

Spaceship Earth & NOT their self-serving MASTERS

brought to fruition, for the purpose of changing the world, whether from a

of the the YIN & YANG Taiji symbol, the one common “truth” which will bind

THE GLOBAL C4D community together as a T.E.A.M. will [BE] the global

understanding of the significant importance of WATER to Spaceship Earth

and ALL of its passengers, especially in view of the now increasingly

The chemical formula for WATER is H2O, meaning that its molecule contains

one oxygen and two hydrogen atoms, that are connected by covalent bonds,

aware of the Yin/Yang significance of the Taiji symbol, but if THE GLOBAL

Western and Eastern Mindsets as well as all of the others, no better

‘significant importance of WATER‘ exemplar could be provided than

that which evolved over a lifetime of studies,  as a direct result of

Leonardo da Vinci’s fascination with the FLOW of WATER • its currents,

and tributaries, as well as the eddies caused by obstructions • whilst

seeking the answers to WHAT CHANGES when CHANGE CHANGES?

Comment by Michael Grove on August 4, 2018 at 9:44
NEVER forgetting that [IT] IS the piezo electricity effect of gravity that Dr. Daniel Keown has proposed as ...
THE SPARK in the MACHINE

Writer Anand Giridharadas describes in his book " Winners Take All: The Elite Charade of Changing the World " why the rich do not pay taxes, but with their philanthropy determine the course of the world (and thereby undermine our democracy). "Last year, more than four hundred billion dollars were spent on philanthropy in the United States. This is nearly going beyond the government budget - excluding the budget for defension. " This is just one of the insights of the former New York Times columnist and writer Anand Giridharadas. He paints a picture of a parallel government: one that is not democratic, but that is run by the super-rich of this world. If rich people and companies avoid paying taxes as much as possible, but depicture the government as bureaucratic and then are taking credit when they open a new university building or hospital because their name is on it - what is left of our democracy? Giridharadas therefore advocates a return to the public interest through renewed cooperation within our democratic institutions. Because, that's how the writer rhetorically summarizes the problem: "Which rich person or company has done more for the elderly in the United States than social security?" "Which rich person or company has done more for health care for the poor than Medicaid?" "Which rich person or company has done more for women than the right to vote?" "Which rich person or company has done more for African Americans than the Votings Rights Act and the Civil Rights Act?" An interview with Anand Giridharadas about the super-rich and how they undermine democracy. Interview & regie: Britta Hosman Research: Henneke Hagen / Arja van den Bergh Edit and Online composition: Daan Kuys Production: Olivier Schuringa Commissioning Editors: Bregtje van der Haak & Doke Romeijn On VPRO broadcast you will find nonfiction videos with English subtitles, French subtitles and Spanish subtitles, such as documentaries, short interviews and documentary series. This channel offers some of the best travel series from the Dutch broadcaster VPRO. Our series explore cultures from all over the world. VPRO storytellers have lived abroad for years with an open mind and endless curiosity, allowing them to become one with their new country. Thanks to these qualities, they are the perfect guides to let you experience a place and culture through the eyes of a local. Uncovering the soul of a country, through an intrinsic and honest connection, is what VPRO and its presenters do best.

So subscribe to our channel, and we will be delighted to share our adventures with you! more information at https://www.VPRObroadcast.com