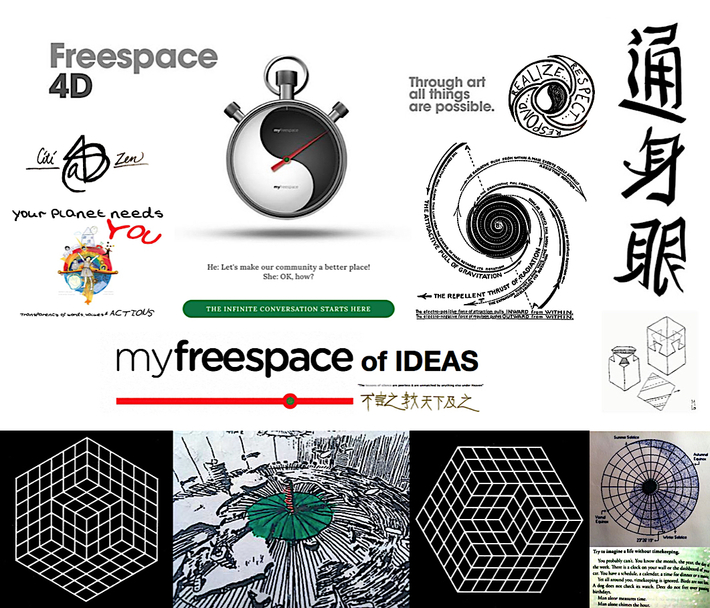 Times that referred to the existence of the fourth dimension. Although the

about, a group of curious artists did.

They committed to a weekly discussion called "Seminar 4D", where they would

explore IDEAS and POSSIBILITIES of such a subject. This evolved into a larger

project called Free Space, which focuses on the response-ability of the artist

and freedom through the APPROPRIATION of IDEAS.

In the beginning, there was AN IDEA, and THE IDEA created A THEME.

As more IDEAS followed, more THEMES were created. So, at the very heart

of THE PROJECT is the "Full Circle Theme Cabinet", in which IDEAS are stored

as works in progress.

THESE IDEAS, both realised and unrealised, are contributed and catalogued

according to THEMES: Full Circle, Give and Take, Catch and Release,

Fake and Real and Start and Finish. IF an IDEA does not fit inside one of

these THEMES, which seems to be rare, a NEW THEME will be generated.

Free Space IS an ongoing experiment in CULTURAL ALCHEMY, in

which incoming IDEAS are examined, discussed, questioned and then

re-appropriated into DIFFERENT FORMS. In goes THE IDEA, out comes

THE PRODUCT. An example IS the need to return to NATURAL TIMING ~

creative time in contrast to Father Time. THIS IDEA IS packaged as a

Free Space clock. There are no longer any hour or minute hands.

Only the minute hand (in red, with green spot at centre) remains ticking

moment by moment • or alternatively the minute hand pointing to

The philosophy of THE PROJECT is true to its name. [IT] IS based in the

recovery of freedom and expressed through metaphor. [IT] IS also study

in collaboration, evolution and change, as artists work together

creating an environment (which includes the physical installations and

performances in the space, the objects created out of the ideas in its

cabinets, as well as interactive installations in other venues).

The Free Space concept, which believes that the intellect and naive should

work together as a T.E.A.M. (as in Together Everyone Achieves More )

and learn from each other, IS also rooted in EDUCATION and iS [BE]ing

applied to the curriculum of a nearby school.