A GLOBAL CONVERSATION ON CREATIVITY 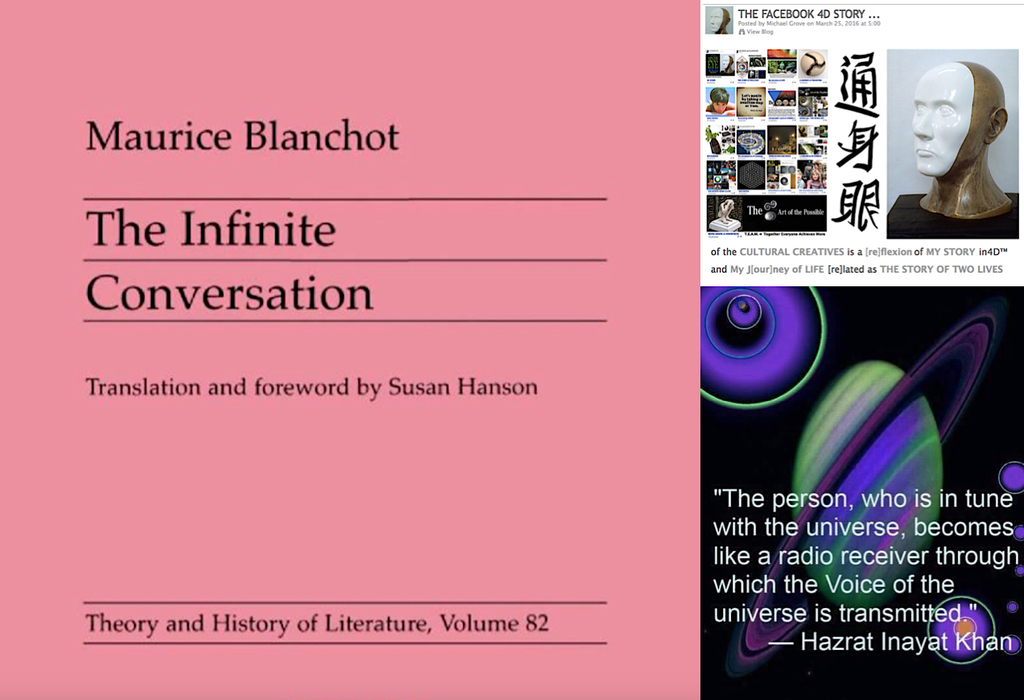 “We can never put enough distance between ourselves and

what we love. To think that God IS, is still to think of him

as present; this is a thought according to our measure,

destined only to console us. [IT] IS much more fitting to

think that God IS NOT,  just as we must love him purely

enough that we could be indifferent to the fact that he

should not be. It is for this reason that the atheist is

closer to God than the believer.”

In this landmark volume, Blanchot sustains a dialogue with a number of

thinkers whose contributions have marked turning points in the history

of Western thought and have influenced virtually all the themes that

“Blanchot waits for us still to come, to be read and reread...

so far ahead of us.” Jacques Derrida

In "The Infinite Conversation", Maurice Blanchot sustains a dialogue

with a number of thinkers, including Kafka, Pascal, Nietzsche, Brecht,

and Camus, whose contributions have marked turning points in the

history of Western thought and have influenced virtually all the themes

on the nature of language, narrative voice, the imaginary, revolution,

nihilism, and Jewish identity, Blanchot brings forward what the

accomplishment of dialectical thought, as well as all thought based on

Grounded in a tradition of philosophy and thoroughly conversant with

phenomenology and the Romantic and post-Romantic traditions,

Blanchot addresses fundamental questions that haunt all analyses of

difference. His unique manner of questioning, which itself borders on

poetry, challenges the very basis on which we read and fashion the world.

Maurice Blanchot is a French critic, theorist, and novelist and the author

"L'Espace Littraire", "L'Amiti", and "La Folie du Jour", many of which have

been translated into several languages.


[IT] was of course, as a result of my conversations on creativity with

Eric R. Kuhne RIP that we both concluded, in the creative context of

FORM FOLLOWS IDEA, that Facebook should be utilised as a surface

onto which IDEAS should be projected, for the purpose of a global

pertaining to THE IDEA that...  "Through art all things are possible"

James I (a.k.a. 'The Wisest Fool in Christendom'), in his 'Speech Before Parliament' 1609, declared: "The state of monarchy is the supremest thing upon earth; for kings are not only God's lieutenants upon earth, and sit upon God's throne, but even by God himself they are called Gods."

Whipping Boy was an established position at the English court during the Tudor and Stuart monarchies of the 15th and 16th centuries. This may not have been quite as bad as it sounds. The whipping boys weren't hapless street urchins living a life of torment, but high-born companions to the royal princes. They were educated with the princes and shared many of the privileges of royalty. The downside was that, if the prince did wrong, the whipping boy was punished. It was considered a form of punishment to the prince that someone he cared about was made to suffer.

In the context of the signing of Magna Carta in 1215 however, and the beheading for treason of King Charles I on January 30, 1649; the strangeness of the concept of a whipping boy is a little easier to understand when put into further context. The Divine Right of Kings was the belief that legitimate kings were appointed by God and so were answerable to God alone, in juxtaposition to the ever legitimate concept of GOD HAVING NO RELIGION.

THE Universal Law of Gender IS the expression of YIN & YANG, otherwise termed the feminine/solar and masculine/lunar. The law states that these two principles reside WITHIN ALL THINGS, and IT IS through these principles that HUMANITY is ABLE to CREATE.

THE Universal Law of Gender is the CREATIVE FORCE that runs from the inner into the outer world. IT IS the force of the ONE & ONLY GOD. It creates LIFE, even that which is born into the solidity of the physical manifestation of our planet of THINGS, for both of the principles of YIN and YANG, in ABSOLUTE BALANCE & HARMONY, must be present to BUILD and to MANIFEST in our multi-dimensional reality, as well.