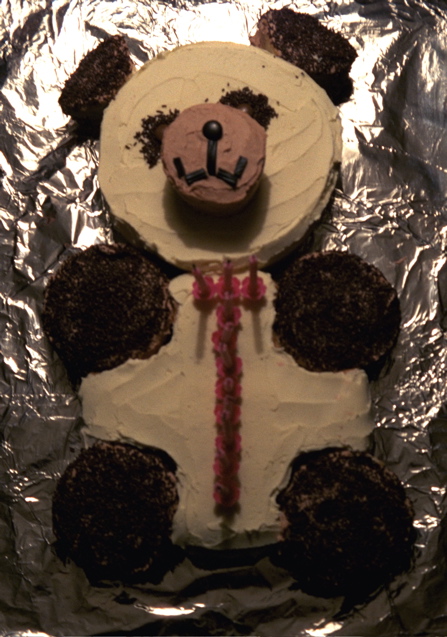 As we celebrate National Marriage Week, IT IS

time to "reflect" on the incalculable value of

THE contribution that marriage makes to social life does not end

with the intensive period of raising a young family. When a couple

marry, they are not simply legalising their sexual relationship –

a step which few couples might think necessary given the relaxed

mores of contemporary society. They are making a public

declaration of their commitment to one another which joins

their two families. IT IS the interconnecting network of all those

conjoined families that constitutes a community. Marriage is not

but to their readiness to accept responsibility for the future.

So the stability of a long-standing marriage can offer emotional

security not only to the first generation of children it produces,

but to grandchildren, extended family and friends.

Twenty years or more ago when my soulmate, Linnie, made this Panda Birthday Cake, on the occassion of one of our three children's birthdays, the Giant Panda was already an "endangered species". My middle daughter Alison became a vegetarian at that time, following her child-hood researches into LIFE on EARTH and subscribing, out of her own pocket money, to Junior Membership of the World Wildlife Fund as well as becoming one of its fund-raisers. It was a family tradition for each of the children to choose what KIND of cake they wanted for their birthdays, and Linnie baked the cake of their dreams for the 18th of January, 12th of February and 18th of February, EVERY year for several years. A diverse multiplicity of cakes, from bird's nests and OWLs to volcanoes and fireworks, including of course one of her masterpieces as pictured above.

MOST of the diverse multiplicity of confrontations, conflicts and consequences, which the peoples of this planet endure, on a day to day basis, fall into the category of mis-understanding, as has long-since been demonstrated between The Peoples Republic of China and Taiwan.

However, following The Peoples Republic's threats of war with Taiwan and the building of the "secret" submarine base on Hainan Island, it was The Peoples Republic which offered an olive branch to Taiwan , in the form of a pair of Giant Pandas, despite the devastating consequences of the earthquake in China last year.

Although Jeff Randall has suggested in his article today that - Bit by Bit Brown's fantasy is being pulled apart by the FACTS - and that - IF this were China we'd shoot the banker's - a reaction, no doubt, that a substantial proportion of the peoples of America would subscribe to, following this week's congressional
hearings of those who have had their fingers in the "honey pot " -

IT would appear that Barack Obama IS facing not dissimilar problems, in building a team of experts to support him in his own "position of integrity".

Following ALL that has happened this week, across the planet,

mis-understanding; at the core of EVERY problem, issue, crisis that

the peoples of the planet face; IS that ALL the models on which we ALL

spiritual behavious, science & the research and development of

technology are based on a predominately patriarchal mind-set.

A mind-set which even permeates the concept of ALL THINGS integral & spiritual.

UNLESS the NEW model/s IS/are seen to tear up the "OLD Model Rule Books" of
the last several millenia of evolutionary development of our species; as a result of
"opening the door" to the establishment of "NEW Model Rule Books" which are based on an internetwork of networks of equitable thinking, we shall ALL experience the re-building of a mechanism which will take ALL LIFE on EARTH INTO THE ABYSS.

Marriage needs to be nurtured not neutered. Supporting marriage through taxation IS a costly policy …

but nowhere near as costly as the dire consequences of social breakdown.

As the Telegraph Editorial goes on to say …

Harriet Harman this week asserted that it is not the role of government to foster the institution of marriage, insisting: “We don't favour one way of family life over another.” The Minister for Women and Equality is
being disingenuous, for the facts say otherwise. Labour's welfare and tax credit systems do positively encourage one particular way of family life – lone parenthood. As a consequence, marriage is not only not
encouraged by Labour, it is actively discouraged.

FROM my own perspective & experience IT seems to me that grand-parents are becoming increasingly important in the upbringing of their grandchildren, as it ever was in times of yore, and that IF grandparents are so essential, surely marriage provides two sets of them, whereas single parenthood tends to discourage one set's participation !!??