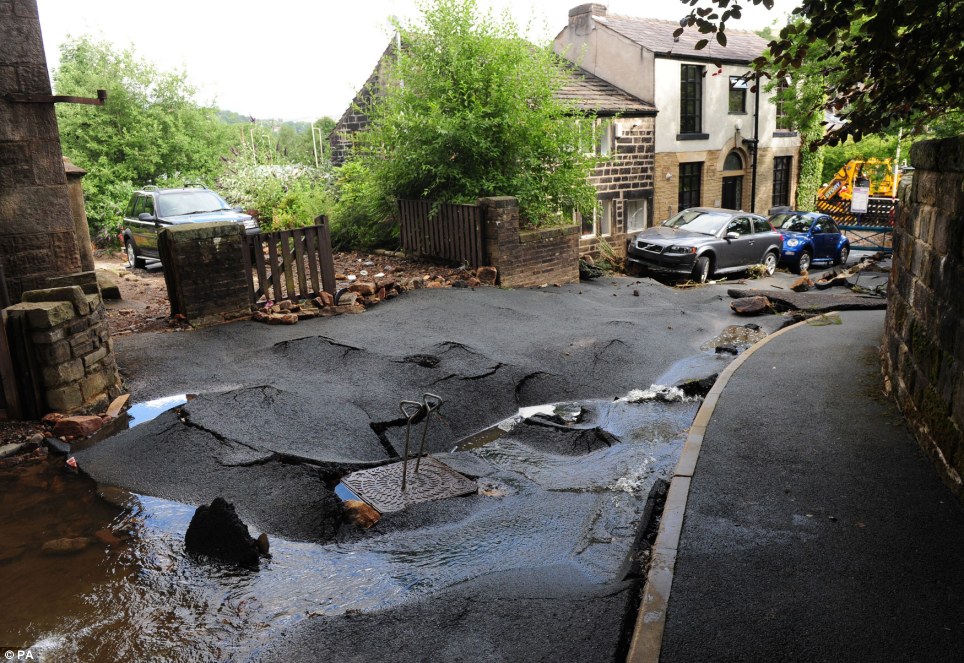 That the earth is rotating at 1000 mph and

that Britain and Ireland sit on the eastern

seaboard of the Atlantic bathed in the effect

of the warm north atlantic drift - our climate

far to the north of us which are much colder.

The ice melt from the Arctic and Greenland is however pushing

that atlantic drift effect and taking the jet streams with it.

As the temperature gradient between these two systems came into

and Ireland such that the diverse weather conditions prevailing

during the course of yesterday - can best be described by the

photographs which the Daily Mail has appended to their article

about yet another flash flood which the inhabitants of Todmorton

the best plaice and chips ever, on the beach at Western Super Mare.

The absolute amount of water on earth is fixed - until another

comet might bring some more - but the increased amount of water

last year on the north american eastern seaboard and this last

month or so because of our own particular weather system

Meanwhile the weather conditions over other european countries

adjacent to and associated with "the divide" - are predicted to

perspectives of the same reality" - which still begs the question,

themselves, but while Maciej Winiayczyk was filming them in the skies above Caithness, the aurora 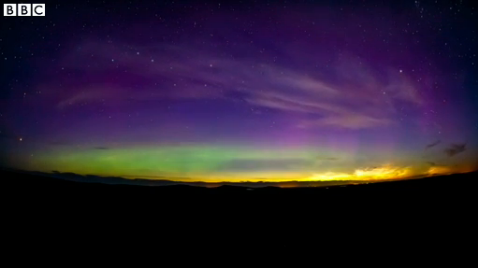 He spoke to the BBC about night filming the two phenomena.

I was watching the devastating effects of the flooding from a helicopter a week or so ago !!! -

Tour of Collorado as one of the events of this years USA Pro Challenge.

Winds exceeding 80mph will tear through the south of the country just as Monday morning commuters are heading to work, forecasters say.

The winds, brought in by what is expected to be the most violent storm to hit the UK in years,

will come at “the worst possible time” and commuters should delay their journeys if necessary,

a spokeswoman for the Met Office said. Gusts of up to 80mph will hit Cornwall and Devon from

around 3am, moving across the country before arriving in East Anglia at 10am and continuing

over the North Sea. The worst of the storm will hit London and the Home Counties between 6

and 7am, just as many commuters are heading to work.

For many of us, inaccurate forecasts do little more than ruin a picnic or sully a recently washed

car. We’re lucky. Weather is a sideshow to our daily lives. For others, though, advance knowledge of

the weather directly affects their livelihoods, from farmers to construction workers to airline pilots.

But there are times when weather affects us all, especially instances of severe weather like

Hurricane Sandy. There, accurate forecasts can save lives, and those forecasts rely heavily on

Unfortunately, in just a few years, part of our weather satellite system that is vital to forecasts 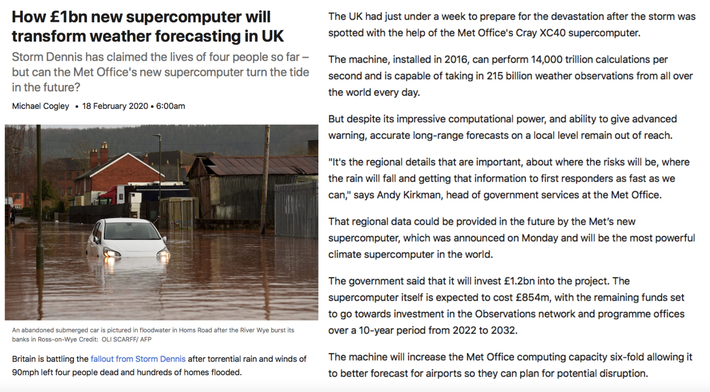 The Met’s existing supercomputer, the Cray XC40, is one of the most powerful in the world dedicated to climate science and is due to reach its end of life in late 2022. The US, Korea, Germany and Australia use the same computer, while Japan relies on the Fujitsu PrimeHPC FX100 and China on IBM’s Flex System P46.

The XC40 has allowed the UK to become “pretty good” at weather forecasting, says Kirkman. “There’s a real community of science that sits around this." Each decade, the Met can predict an entire day further into the future. While the new computer may not speed up forecasts, it will improve their accuracy.

"I think we can expect the quality of forecasting to improve a lot," says Mark Parsons, director of Edinburgh Parallel Computing Centre at the University of Edinburgh. Weather is modelled by cutting the globe up into little blocks,” he explains. At one point the block size was 50 miles and whenever they buy a new computer they can reduce the size of the block, making predictions much more accurate.”

Currently, a model of the Earth is split up into squares that are 10km across. In the UK, forecasts by the Met are more accurate with squares at 1,500m across.Eventually, the new supercomputer could work at a resolution of just 100 million across, allowing forecasters to predict, for instance, if a particular road is at risk of flooding. Prof Mark Wilkinson at the University of Leicester says that the upgrade to the Met Office is “absolutely essential”.

“You can’t make the types of models that they’re developing without a supercomputer. You gather lots of data from satellites and ground stations but the data themselves don’t tell you what’s going to happen, you need a computer capable of modelling long into the future.” he says. 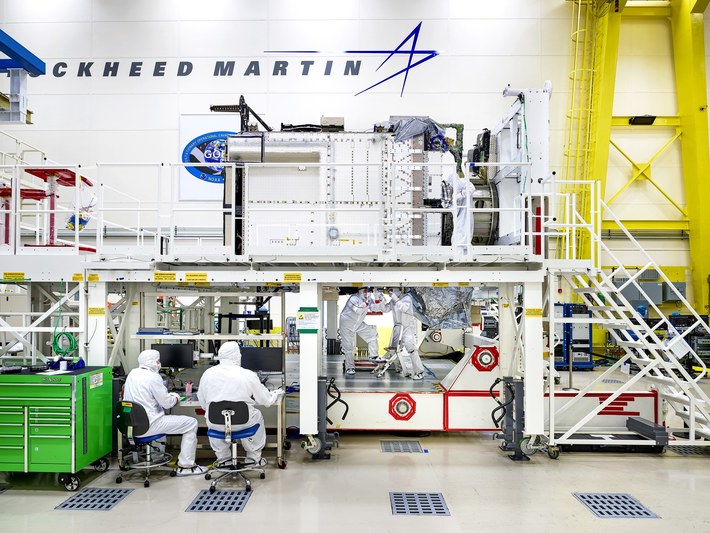 Extreme Weather-Tracking Satellites Prepare for Launch
A new array of sats will detect nearly every bolt of lightning in the Western Hemisphere, powering an early warning system for climate-change-fueled superstorms.
Daniel Oberhaus 02.27.2020 07:00 AM

For ages, earthlings regarded lightning as an indicator of godly wrath. To understand what displeased a higher power, you followed the damage from Thor's hammer strike, Raijin's drumbeat, or the javelins hurled down by Zeus.

Today scientists have their own God's-eye view of lightning, with instruments that orbit about 22,000 miles above the planet, monitoring nearly every single strike that flashes across the Western Hemisphere. Lightning, it turns out, is still an indicator: Increased electrical activity in the atmosphere is a bellwether for the onset of severe storms—a reflection of the damage inflicted not by any god but, at least in part, by human-made climate change.

To be sure, the National Oceanic and Atmospheric Administration has used a network of weather satellites to track storms since the mid-1970s. But six years ago, engineers at Lockheed Martin began assembling a new generation of four 6,000-pound weather satellites—known as GOES, or Geostationary Operational Environmental Satellites—with an array of instruments that can track everything from plumes of volcanic ash to space weather. In orbit, each satellite looks like an old-fashioned movie camera pointed toward Earth, with a boom sticking out the back (a device for measuring changes in the planet's magnetic field to study solar wind) and a massive solar panel where you'd expect to see a film reel. In the place where the lens would go is a device that picks up emissions from oxygen molecules that get excited by the energy of an electrical storm: a lightning detector.