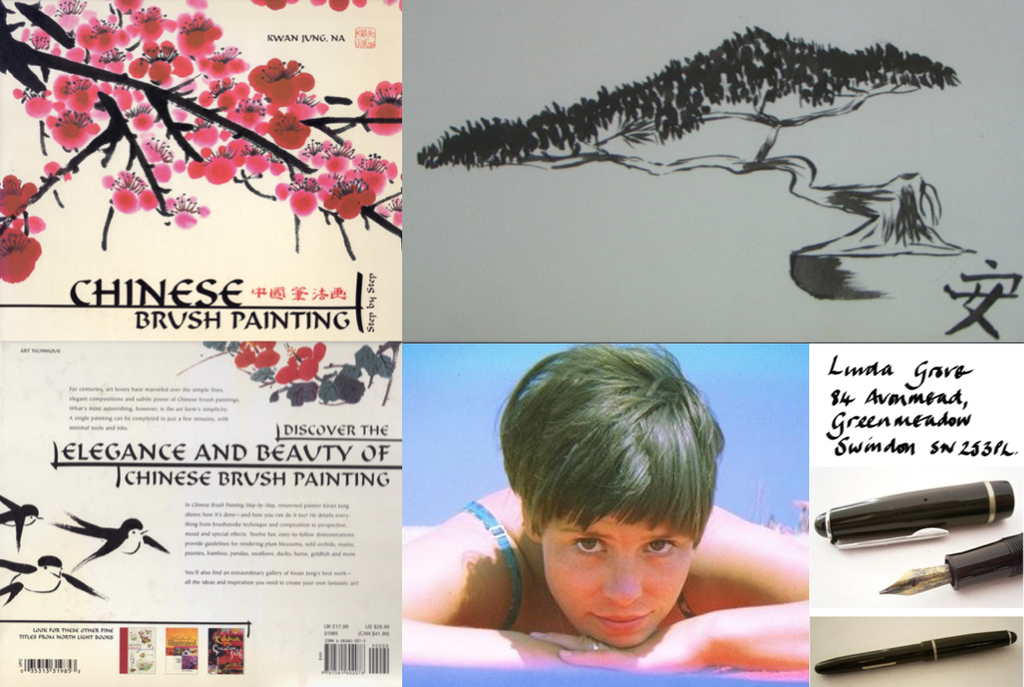 this gem of a book, during a visit to our local BORDERS BOOK SHOP,

which alas no longer exists, I was immediately struck by the painting

of the TWO BIRDS and their offspring, on the spiral-bound back cover;

most favourite 'Het Boekhuis' in Sittard, during the early 1970s, living in

the Netherlands; and the very special event of our first daughter Nicola's

levels how to achieve the fluid, spontaneous style of this unique art form.

Through 12 step-by-step projects, readers will learn how to paint a range

Projects gradually increase in difficulty, and feature such subjects as

in Cambridge, serviced by an excellent mail order process, which supplied

all of our books in English, that the Boekhuis couldn't supply, other than an

excellent range of drawing equipment, including the sketchbooks that

contain the predominance of my own artwork which I have used in cyberspace;

as well as some of my most precious books on Design.

The "Osmiroid 65" fountain pen was developed, chiefly for school children whose special needs for writing instruments had always been a matter of prime concern. A large range of nib units were made to suit right and left handed users and the several types of handwriting being taught, particular attention being paid to the Italic style.

... & so it was as a reward of merit that I received an "Osmiroid 65" fountain pen and the nuns at my primary school in the Archway, London, taught me to write in LEFT-handed italic handwriting - to the point where others took over to prepare me for my 11plus exam that gave me entrance to The Grammar School in the autumn of 1957. It was there that I first met my soul-mate Linnie and so it came to pass, 10 years later, that we were married on April 4th 1968. Linnie has since become extremely proficient in her own Italic Handwriting, as well as Calligraphy and Chinese Brush Painting.

This was further supported, from an artistic perspective, through a process of Discovering Japan, as a direct result of a year long promotion in the UK, of Japanese Art and Photography. As Carter Phipps says ...

"The blinders of local time are removed and we suddenly grasp

the extraordinary truth that we are ancient - related to ALL LIFE

and connected to the history of the cosmos itself."

WE ARE THE EVOLUTIONARIES