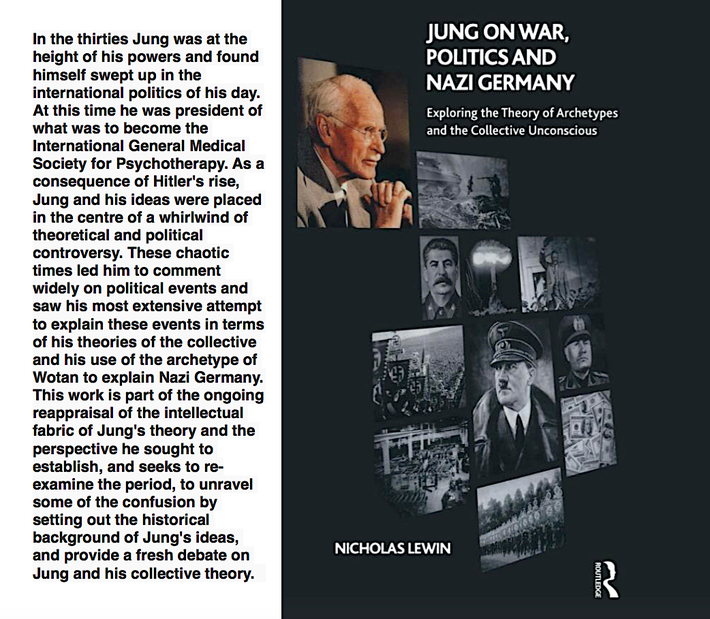 "A great change of our psychological attitude is imminent,

that IS certain, because we need more psychology, we need

more understanding of  HUMAN NATURE,  because the

ONLY REAL DANGER that exists [IS] MAN HIMSELF. HE IS

the Great Danger and we are pitifully unaware of it.

We know nothing of MAN, far too little. His psyche should

be studied because WE ARE the origin of ALL evil coming.

IF you THINK along the lines of NATURE, then you think


A remarkably detailed study of a controversial aspect of an indisputably significant thinker. Nick Lewin clarifies and contextualizes Jung's political outlook without seeking to excuse or exculpate, and presents a powerful argument for seeing Jung's political stance as more complex and sophisticated than it is often assumed to be.


Nicholas Lewin's study is a remarkable piece of scholarship that applies a strategic perspective to the subject of psychology and war. It provides a compelling exploration into the thinking of the renowned psychiatrist Carl Jung, who attempted to understand the upheavals that afflicted the world that he witnessed in the 1930s and 1940s. In particular Lewin explores Jung's ideas concerning war of the psychopathology, both in terms of his attitudes towards the growing threat of war that a revanchist Germany represented from 1936, and later, during the war itself, as a psychiatric consultant for Alan Dulles (future director of the CIA) in American intelligence's early attempts at profiling the enemy leadership using Freudian and Jungian techniques. This is a superb piece of innovative and critical analysis that offers its readers a mastery of Jungian analysis and subtle insights about the challenging world around us.

This book is a valuable contribution to our understanding of Jungian theory and draws on a rich mixture of historical material, evolutionary psychiatry and Jungian scholarship. It offers us new perspectives to understand and use Jung's work. The book re-explores the internal logic of Jung's collective theories and brings new thought to bear on the contribution of Geographical Determinism and the persistence of Lamarckian influences in psychoanalytic thought, and shows how they continue to distort our ability to bring Jungian psychology into contemporary psychological theory. By carefully unpacking Jung's collective theories the book provides the opportunity to refine some of the tools by which we understand, apply and continue Jung's work, and as part of this process Dr Lewin offers some theoretical innovations to archetypal theory, bringing in contributions from evolutionary psychiatry and meme theory to enrich his discussion.