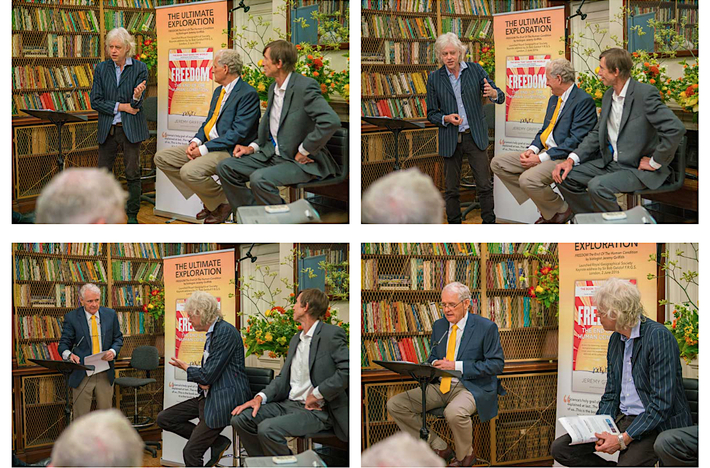 at the Royal Geographical Society with Sir Bob Geldof

We need FREEDOM to be argued, we need it to be read
and talked about and understood. It may be right, it may
be wrong. But you need someone as committed as Jeremy
to trying to understand what gets us here.

series entitled Connections - also subscribes, in not dissimilar fashion, to this

less and less perspective. I am, of course, referring to James Burke who has

inspired a generation of teachers, students and innovative thinkers.

technology, science, and social change throughout modern history - and

history is interrelated & interdependent.  His KnowledgeWeb Project has

chain of events - to communicate the relevant connections in history which

have changed the world. I publish here today my own chain of events which

have resulted in Brian establishing the zaadz environment.

3 years before the United Nations made its Declaration of Human

he called a memex. A machine which would enable you to search through

information with incredible speed. You could pinpoint a thought in a book,

built, in essence, a record tracing your own train of thought - one which you

could pass along to friends and associates. All of which would be considerably

closer to the way the MIND works.

... he further added As Bush described it, the human minds snaps instantly

from one related thought to another, following an intricate web of associative

trails - synapse to synapse -" .. the speed of the action, the intricacy of the

trails, the detail of mental picture is awe inspiring ...."

Following Apple's European launch of the Macintosh at Didacta in Basle

developed into HyperCard. The Apple Macintosh and HyperCard, back-ended

by a NEXT server, was then used by Tim Berners Lee to create an electronic

work-group environment - global in context - to facilitate the connections

between all the scientists and their associates involved in the CERN project.