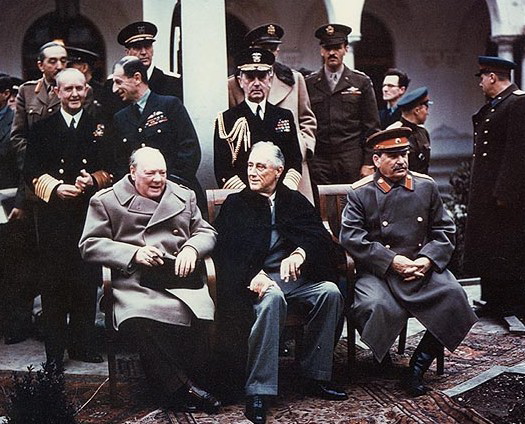 The Yalta Conference meeting took place at Yalta, Crimea, USSR - during the week of 4th to the 11th of February 1945 - between the British Prime Minister Winston Churchill, the U.S. President Franklin Delano Roosevelt, and the Soviet Premier Joseph Stalin.

Apart from demanding Germany's unconditional surrender - including plans for dividing Germany into four zones of occupation (American, British, French, and Soviet) - agreement was also reached on reorganizing the Polish Lublin government (supported by Stalin) - "on a broader democratic basis" - that would include members of Poland's London government-in-exile, which the Western Allies had supported.

The conferees decided to ask China and France to join them in sponsoring the founding conference of the United Nations - to be convened in San Francisco on Apr. 25, 1945 where agreement was reached on using - the veto system of voting in the projected Security Council. India was not invited to the party which has been a source of underlying resentment to this day.

Future meetings of the foreign ministers of the "Big Three" were planned.

The USSR secretly agreed to enter the war against Japan within three months of Germany's surrender and was promised S Sakhalin, the Kuril Islands, and an occupation zone in Korea. The secret agreement respecting the disposal of Japan's holdings also provided that the port of Dalian (Dairen) should be internationalized, that Port Arthur should be restored to its status before the 1904-5 Russo-Japanese War as a Russian naval base,
and that the Manchurian railroads should be under
joint Chinese-Soviet administration.

China later protested that it was not informed of these decisions concerning    its territory and that its sovereignty was infringed.

The United States and Great Britain also agreed to recognize the autonomy of Outer Mongolia, and to admit Ukraine and Belorussia (Belarus) to the United Nations as full members.The Yalta agreements were disputed even before the Potsdam Conference later in 1945.

The subsequent outbreak of the cold war and Soviet successes in Eastern
Europe led to much criticism in the United States of the Yalta
Conference and of Roosevelt, who was accused of delivering Eastern
Europe to Communist domination.