Spaceship Earth are faced ... IT IS APPARENT that an entirely different

NEW ORDER MINDSET of GLOBAL SIGNIFICANCE be established which will

subsume ANY and ALL of THE OLD ORDER MINDSET discussions, taking

place at this TIME, in respect to the fractured future of EUROPE, the USA,

the MIDDLE EAST, the FAR EAST or any other place on Spaceship Earth

which IS CURRENTLY DIVIDED by the redundant OLD ORDER MINDSET of

the NATIONAL BORDERS, which have to be either BROKEN DOWN and/or

PROTECTED at the very same TIME.

A recent article in the Telegraph opened with ...

"The patient is in a critical condition. The International Monetary Fund is concerned that the global economic recovery has taken too long. Kaushik Basu, chief economist of the World Bank, says the financial crisis has left a “festering wound ” that is “refusing to heal”

"WHY the IMF/WORLD BANK/EU Obama et AL are so adamant that ALL these concerns about the global economic recovery, completely and utterly hinge around the UK EU REFERENDUM • and WHY it has nothing to do with the fact that HUMPTY DUMPTY has fallen off the wall for the last TIME and can never be put back together again, as a consequence of the final demise of the OLD ORDER MINDSET ?"

NOT an easy answer for the self-serving Davos elitist [WO]men to admit, but thankfully at least one MAN has stepped up to the plate and had the "sheer temerity darling " of setting forth his "KING IS in HIS ALTOGETHER" CHALLENGE, by way of a particularly brilliant "curious case of  BEING BRITISH", in the guise of a "beer mat discussion piece". 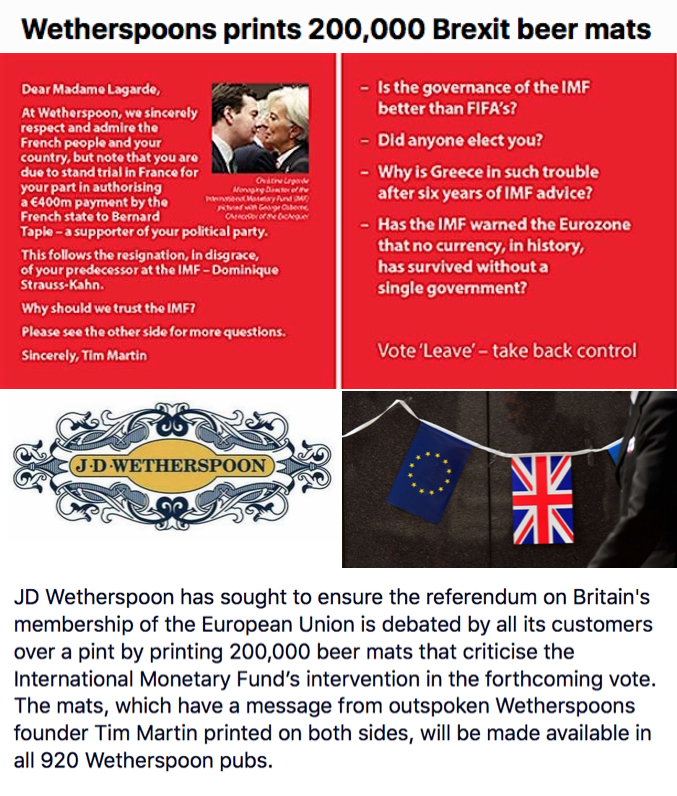