As Alison Pearson has said in her Telegraph article: Roland Dacre Rudd is a classic example of a privileged breed which is treating the views of ordinary, less fortunate Britons during this referendum with lofty disdain. His father was a stockbroker (of course), he went to public school (obviously) and Oxford where he was President of the Union (natch). The former European Commissioner Lord (Peter) Mandelson is godfather to one of Rudd’s children, who will never struggle to get into their first, second or third choice of secondary school due to uncontrolled EU migration (just a hunch). Nothing wrong with any of that, of course. Some rather able Prime Ministers I could mention had stockbroker fathers and were privately educated. Good luck to them. It’s when the likes of Rudd choose to paint the sincerely-held views of their fellow countrymen as racist or – pass the smelling salts, Marjorie! – “populist” that I reach for my pistol. What exactly is so bad about “populism” anyway? Wikipedia defines it as ...

“the proposition that virtuous citizens are being mistreated by a small circle of elites, who are depicted as trampling in illegitimate fashion upon the rights, values and voice of the legitimate people”.

#2 • It seems that everyone from Barak Hussein Obama down is claiming that Britain will be ‘safer’ in Europe and by Europe they mean the EU. Even Dave Cameron is bruiting this nonsensical trope and he doesn’t even have the excuse that he was born in Kenya and can’t be expected to understand the difference between the EU and NATO.

A major plank of this trope is that the security services of the EU nations can or do or have or maybe someday will share intelligence about terrorists. Islamic terrorism in the UK can scarcely be said to meaningfully exist. From time to time some of our home grown disaffected muslims decide to put their jihadist aspirations into effect, though ‘effect’ is hardly the right word. Their efforts are fatally hampered by their own incompetence, their lack of terrorist resources and skills and by their tendency to boast about their activities and intentions on social media. Incompetent though the jihadists undoubtedly are, their numptytude is quite outshone by our security services who have proved themselves to be almost 100% useless as my regular readers will already know.

On the continent the jihadists have been much more successful. Their preferred MO is to go on shooting sprees, using military weapons that are easily smuggled in from the Balkans and other points east. Equally, the security services in Europe are quite impotent to detect and interdict these attacks. The idea that the security services in other EU countries, which are incapable of preventing their jihadists carrying out shooting sprees, might sometime in the future start “sharing intelligence” with our security numpties that will help them in some way to deal with our largely non-existent and utterly incompetent home-grown jihadists is laughable in the extreme. Yet we are solemnly warned that continued membership of the EU is necessary to enable some mythical future “intelligence sharing” that is necessary to ‘keep us safe’.

said his appearance on Thursday was an “exercise to scare you ”. He said:

“Last night what we heard was depressing and an exercise to scare you into not following through with what you know in your heart is right. The one thing that’s clear to me is that if we have confidence in ourselves there’s no limit to what we can achieve. The depressing litany that we hear from the Remain side is not the sort of approach we should take into the future. We believe in unlocking the potential of the British people.”

The European Union is a “job-destroying machine” run by “sneering elites”, Michael Gove said on Friday as he described the “misery” he saw when his father lost his job because of Brussels. Appearing in his first televised debate of the referendum campaign, the Justice Secretary spoke emotionally about how he watched his father’s fish merchant business “going to the wall” because of the EU, which he accused of “hollowing out” communities across Britain.

Clashing repeatedly with Sky News presenter Faisal Islam, who Mr Gove said was “on the side of the elites”, he said: “Don't belittle the pain caused by the job-destroying machine of the European Union." Mr Gove also launched his strongest attack on David Cameron, accusing his Remain campaign of treating British voters like they are “too small, too poor and too stupid” to go it alone outside of the EU. In comments that will infuriate Downing Street, Mr Gove criticised the Prime Minister’s “depressing ” campaign designed to “scare” the British people. He suggested that Britain’s current immigration system is “racist” because it discriminates against people from countries outside of the EU. Mr Gove said that Britain can only have “control” of its immigration system if it leaves the EU. He described the Leave campaign as “Project Hope”, insisting that only his campaign is on the “side of the people”. However, Mr Gove was unable to guarantee that every British person will keep their job in the event of a Brexit and struggled when asked to name economic authorities or any countries backing his bid to take Britain out of the EU. Mr Gove, who was adopted by a fish merchant in Aberdeen, spoke movingly about how his father’s business had been “destroyed by the European Union”.

"The European Union has hollowed out communities across this country," he added. When Mr Islam tried to dismiss his claims about his father, Mr Gove said: “Don't skate over the misery of those who have lost their jobs as a result of the European Union." He was accused by Mr Islam of being an “Oxbridge Donald Trump” and “treating the public as fools” because of his contested claim that Britain sends £350 million a week to Brussels.

However, Mr Gove said: “You are on the side, Faisal, of the elites. I’m on the side of working people.” He added: “It is that sort of sneering condescension towards people who believe in democracy that discredits people on the Remain side.” Mr Gove launched a highly personal attack on Mr Cameron just one day after the Prime Minister faced hostile questioning and accusations of “scaremongering” over the tone of his Remain campaign. “What we saw last night was depressing and it was an exercise in trying to scare you,”    Mr Gove said and added: “Many of those who are arguing that we should Remain are trying to frighten you by saying that it would be impossible for Britain to succeed.

“They're saying that Britain is too small, too poor and we’re all too stupid to be able to succeed on the outside. I comprehensively reject that.”

His performance will be seen as an attempt by the Leave campaign to focus on the economy after a series of successful interventions about immigration. 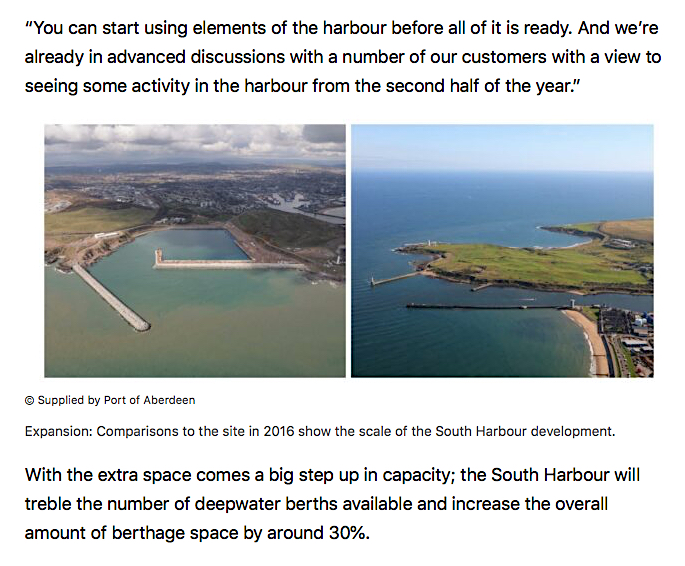 The change will come into effect to coincide with

the company’s annual general meeting on May 11,

new harbour expansion. Although the official

operational date is October 31 – which will cover

the majority of the project, not the entirety –

... the first vessels are due to be welcomed

in the months ahead.