WHO WOULD HAVE BELIEVED THAT HAVING FIRST READ ... 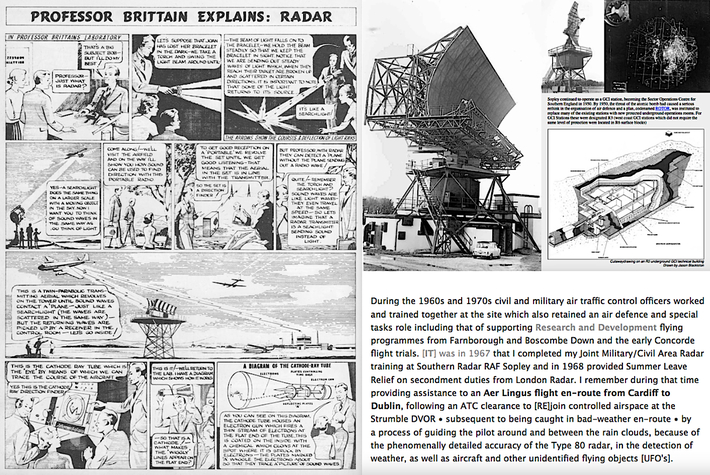 Agency in Brussels, as the first CIVIL/MILITARY Area Radar Controller to be

qualified as such at Southern Radar Sopley and London Radar Heathrow.

preparation for the 11+ Entrance Examination to Grammar School, but

I had been an avid reader of the buried treasures of information, which

made the EAGLE COMIC the outstanding boys' paper of the last century.

the iconic MINI was a favourite and a foretaste of the real thing, an example

of which a colleague of mine owned whilst working at Sopley Radar.

While I was still at Borehamwood Grammar School, studying for my A Levels in Pure Maths, Applied Maths and Physics, I also well remember following through on my thoughts of becoming a pilot having been on a school-visit to De Havilland Hatfield, where I saw King Saud's Comet 4B being prepared for delivery as well as the very first DH 125's with their registrations (G-ARYA) and (G-ARYB) which were completed at Hatfield with the major components having been shipped from Chester. These first two aircraft, however, we’re essentially prototypes, differing substantially from the third and subsequent aircraft, which themselves have transmogrified over a considerable period of TIME in to the very latest versions of Hawker 800.

but having been accepted by BOAC to be trained as such, my mandatory

because of my age and the fact that I was still growing, I should wait until I

was 21 to re-apply & retake the medical, because by that time my eyesight

would  not be deemed susceptible to deterioration; and so it was that I

Maths and Physics educational qualifications. My headmaster at the time

oriented nature, that becoming a pilot would not actually suit my character

and in the context of having to have yet another ATPL Medical Examination,

remembered from his records, having failed me for the B.O.A.C. training but

eye-sight requirements in the meantime, had evolved to the point where

mine would have been perfect for B.O.A.C. Pilot Training and particularly for

flying Concorde. An event which I now look back on as a lesson for me

else and that each and everyone of us arrives on this planet, with a purpose to

This 18th May 1963, Eagle centrefold of Concorde was one of the last editions of the comic which I bought before I started to seriously revise for the A level GCE Examination passes which I had to gain, prior to my application to BOAC for Airline Transport Pilot's Licence training or to the Ministry of Aviation for training as an Air Traffic Controller. The plane first flew on 2 March 1969, and initially, there was a lot of interest from the world's airlines. But it soon ran into problems. Governments weren't keen on sonic booms scaring their populations, and many • (including the US, which had a very large subsonic airliner manufacturing base to protect) • banned it from flying at supersonic speeds over their territories.

There was also the question of costs. The project, being underwritten by the British and French governments, racked up six times the original estimate. The price of oil went through the roof and Concorde was unable to compete with the new generation of wide-bodied aircraft, led by the Boeing 747, which had its first flight just weeks before Concorde's.

Faced with these problems, its customers evaporated. The only two left were the state airlines of Britain and France. But development continued, and 20 aircraft were built, at a total cost of some £1.3bn.

Finally, at 11:40am 21 January 1976 seven years after the prototype first flew, and five years after the 747 entered service two Concordes took off simultaneously from London and Paris, carrying the first commercial passengers. The British Airways flight set off for Bahrain, while the Air France flight headed for Rio de Janeiro, via Dakar.