[IS] in[DEED] commensurate with the evolution of a PERSPECTIVE of 'REFLEXIONNE' on the development of      a SENSE of PLACE • WHAT CHANGES when CHANGE CHANGES • in depth understanding of the very
consequences of consequences of  COMPLEX SYSTEMS because EVERYTHING UNIVERSAL [IS] most indubitably CONNECTED to EVERYTHING ELSE. 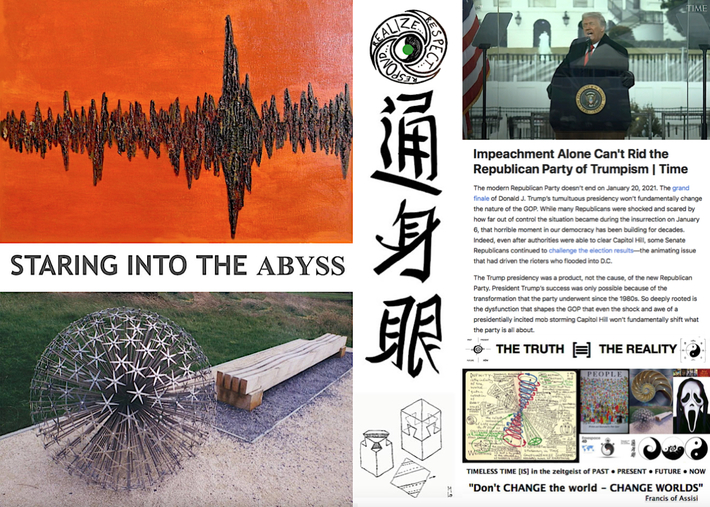 When the news of John F. Kennedy's defeat of Nixon in the 1960 Presidential election, was first broadcast, my soulmate Linnie and I were attending a Fourth Form lesson in History and barely 3 years later following the Cuban missile crisis, whilst studying for our 'A' Level GCE examinations, we then both heard that President Kennedy had been assassinated.

As biologist Lynn Margulis points out, “life does not exist on Earth’s surface so much as it is Earth’s surface. . . . Earth is no more a planet-sized chunk of rock inhabited with life than your body is a skeleton infested with cells.”[5] Gaia’s radical challenge to traditional Darwinian biology is that life influences the environment. For Darwin, life was essentially passive, a process that was forced to adapt to a specific environment. Gaia theory shows that life and environment evolve as a single, coevolutionary process. On Earth, all life is an embodiment of the planetary environment, but the planetary environment is also product of life. Gaia theory and the new biology embodies the circular, metabolic logic of life. The universe brings forth life and mind—but life and mind work to shape the universe. Life and environment are folded back on themselves in a self-referential, evolutionary spiral. Gaia is not a single organism, but a superorganism. Like the single organisms of which it is comprised, it is self-regulating and autopoietic. Like my own body composed of many individual cells, Gaia has its own metabolism. As we breathe and exhale, we participate in the life-breath of the entire biosphere. Gaia theory is strongly supported by complexity science, which shows how complex systems with feedback loops spontaneously self-organize and develop metabolic patterns. From the Gaian perspective, our own lives are totally inseparable from the life of the larger planet.
http://www.cosmopolisproject.org/gaia-theory-in-a-nutshell/