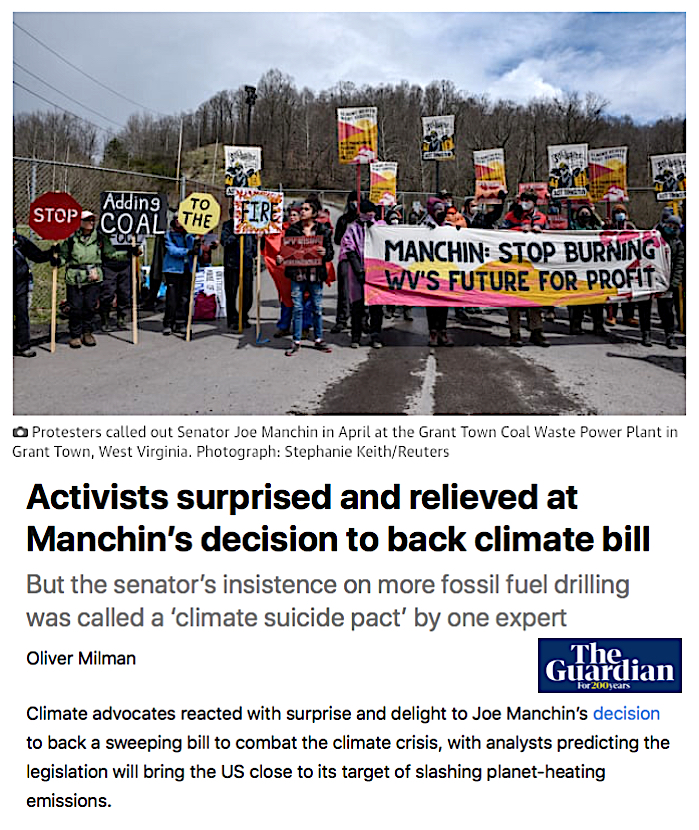 ... HAS CHANGED HIS MIND

The bill would “bring clean energy jobs to America and lower energy bills for American families”, tweeted Leah Stokes, a climate policy expert at the University of California, Santa Barbara.

“It would get us 80% of the way to President Biden’s climate goal. This is a gamechanger.”

However, Manchin has said the legislation “does not arbitrarily shut off our abundant fossil fuels” and has extracted guarantees of new offshore and onshore drilling, including a stipulation that millions more acres of public lands be opened for fossil fuel companies before new solar or wind energy projects can do the same.

The West Virginia senator is a keen backer of a large proposed gas pipeline in his home state and has called for greater domestic oil production, citing fears over inflation.

The requirement for more drilling leases amounts to a “climate suicide pact”, according to Brett Hartl, government affairs director at the Center for Biological Diversity.

“The new leasing required in this bill will fan the flames of the climate disasters torching our country,” Hartl said, lamenting “a slap in the face to the communities fighting to protect themselves from filthy fossil fuels”. Should the bill pass, it will almost certainly do so without a single Republican vote, with the party still almost uniformly opposed to any significant action to address the climate crisis or impinge on the fossil fuel industry.

Lindsey Graham, a Republican senator from South Carolina, said he could not believe that Manchin “is agreeing to a massive tax increase in the name of climate change when our economy is in a recession. I hope that common sense will eventually win the day.”