THE SUITS WITH RESPONSIBILITIES FOR EVERYTHING ... 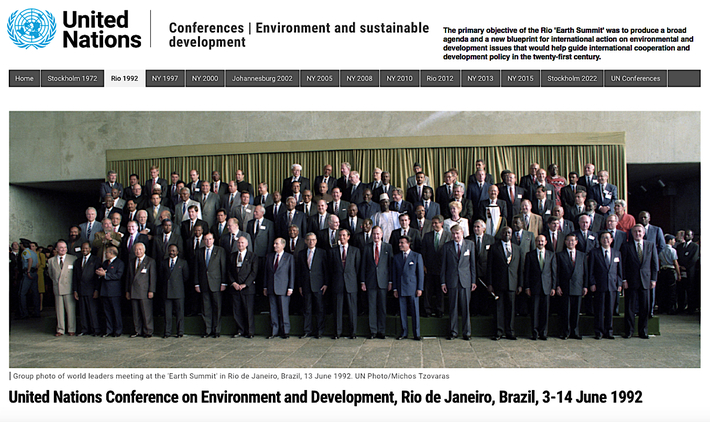 .. and [IN] ABSOLUTE CONTROL of no[THING] and barely

a female in[SIGHT] at this 1992 so-called Earth Summit.

Never forgetting that Colin Mason as a Tasmanian • was

the representative for Australia at the first 1992 Climate

Conference in Rio where Severin Suzuki gave her original

climate address • and he who subsequently wrote his two

now classic books entitled the 2030 Spike and A SHORT

HISTORY of the FUTURE surviving the 2030 Spike.

[IS] there any wonder therefore following Severin Suzuki's

impassioned address, that here we are today having only

Glasgow • without ANY REAL CONSENSUS of how to

proceed with the repercussions of a warming planet • that

in [IT]self would suggest THE FAILURE OF OUR LORDS

The UK is president of the UN climate negotiations for most of the rest of this year, having hosted the Cop26 climate summit in Glasgow last November. That puts the government in a powerful position to pioneer CBAMs, which have been widely discussed for years BUT not put into effect. 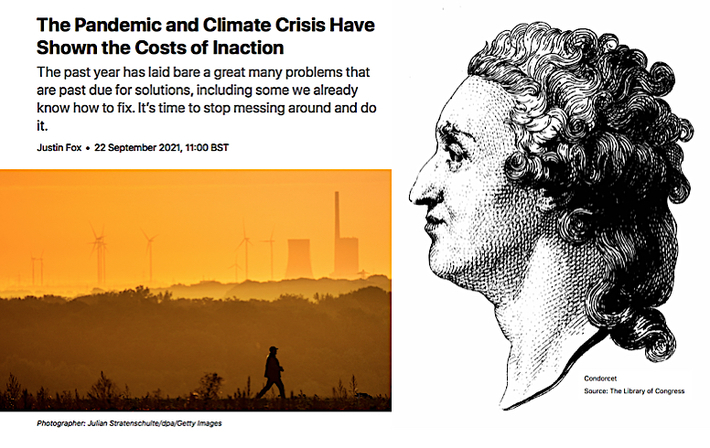 The first techno-futurist bestseller, published in France in 1795 and quickly translated into English and other languages, envisioned not only longer life spans, increased agricultural productivity, and more efficient use of resources but also wiser citizens and better governance. Lending poignancy to this last prediction, the author of the Sketch for a Historical Picture of the Progress of the Human Mind, the Marquis de Condorcet, wrote it while he was in hiding from the Jacobin radicals who seized control of the French Revolution from mid-1793 to mid-1794. Condorcet, a mathematician-turned-scientific-administrator who’d briefly risen to political power in the middle stages of the revolution, died on the run not long after finishing the book. It was “a singular instance of the attachment of a man to principles, which every day’s experience was so fatally for himself contradicting,” quipped English clergyman Thomas Robert Malthus.