ON MONDAY & TUESDAY, THE RUSSIAN INVADERS ... ... could only muster local attacks involving a few hundred

troops, leading the expert monitors to conclude that

Russian forces were “likely unable to complete the

operations in north-eastern Ukraine in the near future”. Putin’s increasingly deranged behaviour should worry us all

of a return to Soviet-era economic crises. 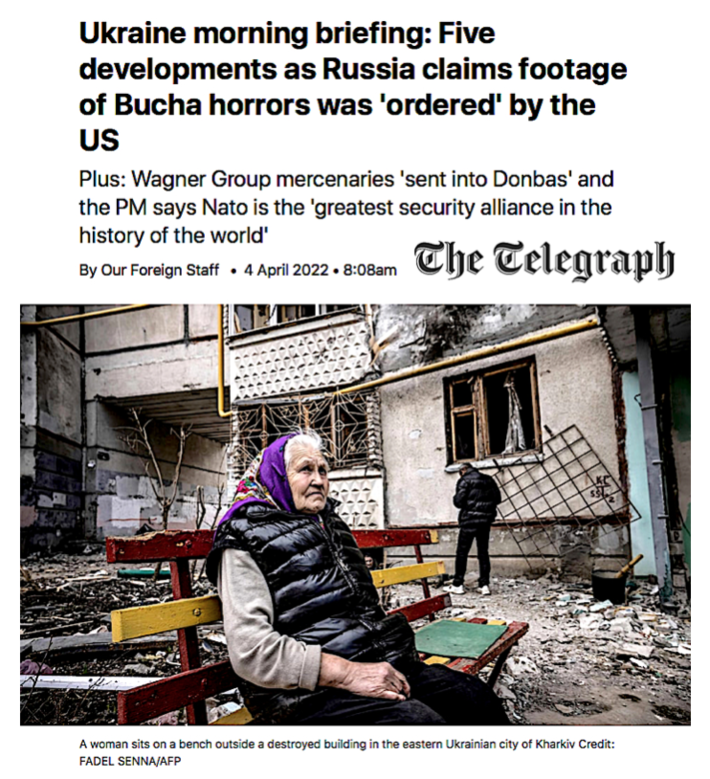 As the world declares its shock at the horrors inflicted on innocent civilians in Ukraine, Russia's defence ministry said photographs and videos published by Ukrainian authorities alleging "crimes" by troops in Bucha were a "provocation" and no resident suffered violence at the hands of Russians.

The bodies of 410 civilians found in formerly Russian occupied territory around Kyiv are being examined by forensic experts as Ukrainian prosecutors prepare war crimes cases.

On Sunday night, Mr Johnson promised to send specialist police and military investigators to help the International Criminal Court's investigations with a view to bringing charges in The Hague.

The Telegraph understands that the UK is also leading a drive within the "Five Eyes" alliance to consider sharing classified intelligence on war crimes with Ukrainian prosecutors.

... and SURPRISE SURPRISE Germany is the main roadblock to imposing tougher sanctions on Russia, Poland's Prime Minister has said, as calls mount to punish Moscow for apparent war crimes.

YET a.n.other nail in the coffin so to speak, with regard to and respect for my long standing diatribe concerning the actions of our Lords & Masters since Severin Suzuki gave her impassioned speech to the 1992 Earth Summit in Rio.